The cilium (from la 'eyelash';[1] the plural is cilia) is an organelle found on eukaryotic cells in the shape of a slender protuberance that projects from the much larger cell body.[2]

In eukaryotes, motile cilia and flagella (together known as undulipodia) are structurally similar, although distinctions are sometimes made according to function or length.[6][7] Immotile cilia (called primary cilia) communicate signals from the environment or from other cells.[8][9]

In animals, non-motile primary cilia are found on nearly every type of cell, blood cells being a prominent exception.[2] Most cells only possess one, in contrast to cells with motile cilia, an exception being olfactory sensory neurons, where the odorant receptors are located, which each possess about ten cilia. Some cell types, such as retinal photoreceptor cells, possess highly specialized primary cilia.[10]

Although the primary cilium was discovered in 1898, it was largely ignored for a century and considered a vestigial organelle without important function.[11][2] Recent findings regarding its physiological roles in chemosensation, signal transduction, and cell growth control, have revealed its importance in cell function. Its importance to human biology has been underscored by the discovery of its role in a diverse group of diseases caused by the dysgenesis or dysfunction of cilia, such as polycystic kidney disease,[12] congenital heart disease,[13] mitral valve prolapse,[14] and retinal degeneration,[15] called ciliopathies.[16][17] The primary cilium is now known to play an important role in the function of many human organs.[2][3]

Cilia are assembled during the g1 phase and are disassembled before mitosis occurs.[18] Disassembly of cilia requires the action of the Aurora A kinase.[19] The current scientific understanding of primary cilia views them as "sensory cellular antennae that coordinate many cellular signaling pathways, sometimes coupling the signaling to ciliary motility or alternatively to cell division and differentiation."[20] The cilium is composed of subdomains[clarification needed] and enclosed by a plasma membrane continuous with the plasma membrane of the cell. For many cilia, the basal body, where the cilium originates, is located within a membrane invagination called the ciliary pocket. The cilium membrane and the basal body microtubules are connected by distal appendages (also called transition fibers). Vesicles carrying molecules for the cilia dock at the distal appendages. Distal to the transition fibers form a transition zone where entry and exit of molecules is regulated to and from the cilia. Some of the signaling with these cilia occur through ligand binding such as Hedgehog signaling.[21] Other forms of signaling include G-coupled receptors including the somatostatin receptor 3 in neuronal cells.[22]

Larger eukaryotes, such as mammals, have motile cilia as well. Motile cilia are usually present on a cell's surface in large numbers and beat in coordinated waves.[23]

Motile cilia are also found on the epithelial cells of the choroid plexus epithelial cells. They are present in large numbers on each cell and move relatively slowly, making them intermediate between motile and primary cilia. In additional to 9+0 cilia that are mobile, there are also 9+2 cilia that stay immobile found in hair cells.[26]

The functioning of motile cilia is strongly dependent on the maintenance of optimal levels of periciliary fluid bathing the cilia. Epithelial sodium channels ENaC that are specifically expressed along the entire length of cilia apparently serve as sensors that regulate fluid level surrounding the cilia.[24][27]

Ciliates are microscopic organisms that possess motile cilia exclusively and use them for either locomotion or to simply move liquid over their surface.

The third type of cilium is a motile 9+0 cilium known as a nodal cilium. The nodal cilia are only present in the early development of the embryo. It is of similar structure to the primitive cilium in having no central apparatus, but it does possess dynein arms that enable it to move or spin in a circular direction.[5] The spin of a nodal cilium is clockwise, and this causes a flow of extraembryonic fluid to move across the nodal surface, directed to the left. Primary cilia around the nodal cilia sense the directional flow — which activates nodal signaling, establishing left to right sidedness.[5] 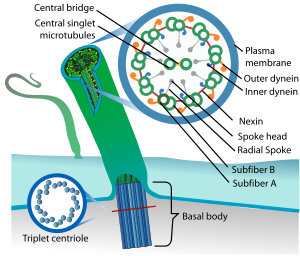 Inside cilia and flagella is a microtubule-based cytoskeleton called the axoneme. The axoneme of a primary cilium typically has a ring of nine outer microtubule doublets (called a 9+0 axoneme), and the axoneme of a motile cilium has, in addition to the nine outer doublets, two central microtubule singlets (called a 9+2 axoneme). The axoneme acts as a scaffold for axonemal inner and outer dynein arms that move motile cilia, and provides tracks for molecular motor proteins, such as Kinesin II, that carry proteins along the length of the cilium through a process called intraflagellar transport (IFT).[2][28][29] IFT is bi-directional and retrograde IFT employ the cytoskeletal dynein motor 2 to move back toward the cell body. The cilium is surrounded by a membrane contiguous with, but compositionally distinct from, the plasma membrane.[30]

The ciliary rootlet is a cytoskeleton-like structure that originates from the basal body at the proximal end of a cilium. Rootlets are typically 80-100 nm in diameter and contain cross striae distributed at regular intervals of approximately 55-70 nm. A prominent component of the rootlet is Rootletin.[31]

To achieve its distinct composition, the proximal-most region of the cilium consists of a transition zone that controls which proteins can enter and leave the cilium.[32][33][34] At the transition zone, Y-shaped structures connect the ciliary membrane to the underlying axoneme. Control of selective entry into cilia may involve a sieve-like function of transition zone. Inherited defects in components of the transition zone cause ciliopathies, such as Joubert syndrome. Transition zone structure and function is conserved across diverse organisms, including vertebrates, C. elegans, D. melanogaster and Chlamydomonas reinhardtii. In mammals, disruption of the transition zone reduces the ciliary abundance of membrane-associated ciliary proteins, such as those involved in Hedgehog signal transduction, compromising Hedgehog-dependent embryonic development of digit number and central nervous system patterning.

Though they have been given different names, motile cilia and flagella have nearly identical structures and have the same purpose: motion. The movement of the appendage can be described as a wave. The wave tends to originate from the cilium base and can be described in terms of frequency (ciliary beat frequency or CBF), amplitude and wave length. The beating motion is created by dynein arm structures the sliding of outer doublets, and originates in the axoneme, not at the basal body. A key difference between the two structures is that in a eukaryotic organism such as humans, flagella are used to propel the cell, while cilia are used to move substances across a surface. An example of each would be the flagellum present on a sperm cell and the cilium on the epithelial tissue of the lungs that clears out foreign particles. Motile cilia and flagella possess the same 9+2 axoneme structure. The 9 indicates the number of doublets present around the outer edge of the appendage while the 2 refers to a central pair of independent microtubules. In primary and other non-motile cilia, the axoneme lacks a central pair, resulting in a 9+0 axoneme structure.[35]

Cilia are formed through the process of ciliogenesis. An early step is docking of the basal body to the growing ciliary membrane, after which the transition zone forms. The building blocks of the ciliary axoneme, such as tubulins, are added at the ciliary tips through a process that depends partly on intraflagellar transport (IFT).[36][37] Exceptions include Drosophila sperm and Plasmodium falciparum flagella formation, in which cilia assemble in the cytoplasm.[38]

At the base of the cilium where it attaches to the cell body is the microtubule organizing center, the basal body. Some basal body proteins as CEP164, ODF2 [39] and CEP170,[40] are required for the formation and the stability of the cilium.

In effect, the cilium is a nanomachine composed of perhaps over 600 proteins in molecular complexes, many of which also function independently as nanomachines. Flexible linkers allow the mobile protein domains connected by them to recruit their binding partners and induce long-range allostery via protein domain dynamics.[20]

Some primary cilia on epithelial cells in eukaryotes act as cellular antennae, providing chemosensation, thermosensation and mechanosensation of the extracellular environment.[42][3] These cilia then play a role in mediating specific signalling cues, including soluble factors in the external cell environment, a secretory role in which a soluble protein is released to have an effect downstream of the fluid flow, and mediation of fluid flow if the cilia are motile.[42] Some epithelial cells are ciliated, and they commonly exist as a sheet of polarized cells forming a tube or tubule with cilia projecting into the lumen. This sensory and signalling role puts cilia in a central role for maintaining the local cellular environment and may be why ciliary defects cause such a wide range of human diseases.[17] In the mouse embryo, cilia are used to direct the flow of extracellular fluid. This leftward movement is used by the mouse embryo to generate left-right asymmetry across the midline of the embryo. Central cilia coordinate their rotational beating while the immotile cilia on the sides sense the direction of the flow.[43]

Ciliary defects can lead to a number of human diseases.[17][44] Genetic mutations compromising the proper functioning of cilia, ciliopathies, can cause chronic disorders such as primary ciliary dyskinesia (PCD), nephronophthisis or Senior–Løken syndrome. In addition, a defect of the primary cilium in the renal tubule cells can lead to polycystic kidney disease (PKD). In another genetic disorder called Bardet–Biedl syndrome (BBS), the mutant gene products are the components in the basal body and cilia.[16]

As noted above, epithelial sodium channels ENaC that are expressed along the length of cilia regulate fluid level surrounding the cilia. Mutations that decrease the activity of ENaC result in multisystem pseudohypoaldosteronism, that is associated with fertility problems.[24] In cystic fibrosis that results from mutations in the chloride channel CFTR, ENaC activity is enhanced leading to a severe reduction of the fluid level that causes complications and infections in the respiratory airways.[27]

Since the flagellum of human sperm is actually a modified cilium, ciliary dysfunction can also be responsible for male infertility.[46]

Early 2000s findings in genetic research have suggested that many genetic disorders, both genetic syndromes and genetic diseases, that were not previously related in the medical literature, may be, in fact, highly related in the root cause of the widely varying set of medical symptoms that are clinically visible in the disorder. These have been grouped as an emerging class of diseases called ciliopathies. The underlying cause may be a dysfunctional molecular mechanism in the primary/immotile cilia, organelles which are present in many diverse cellular types throughout the human body.

The diverse outcomes caused by ciliary dysfunction may result from alleles of different strengths that compromise ciliary functions in different ways or to different extents. Many ciliopathies are inherited in a Mendelian manner, but specific genetic interactions between distinct functional ciliary complexes, such as transition zone and BBS complexes, can alter the phenotypic manifestations of recessive ciliopathies.[49][50]

Reduction of cilia function can also result from infection. Research into biofilms has been increasing and has shown how bacteria can alter cilia. A biofilm is a community of bacteria of either the same or multiple species of bacteria. The cluster of cells secretes different factors which form an extracellular matrix. Cilia in the respiratory system is known to move mucus and pathogens out of the airways. It has been found that patients with biofilm positive infections have impaired cilia function. The impairment may present as decreased motion or reduction in the number of cilia. Though these changes result from an external source, they still effect the pathogenicity of the bacteria, progression of infection, and how it is treated.[51]