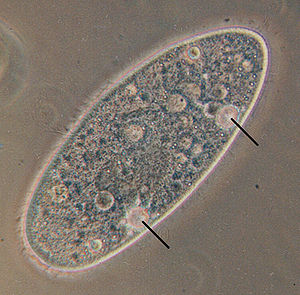 A contractile vacuole (CV) is a sub-cellular structure (organelle) involved in osmoregulation. It is found predominantly in protists and in unicellular algae. It was previously known as pulsatile or pulsating vacuole.

The contractile vacuole is a specialized type of vacuole that regulates the quantity of water inside a cell. In freshwater environments, the concentration of solutes is hypotonic, lesser inside than outside the cell. Under these conditions, water osmosis causes water to accumulate in the cell from the external environment. The contractile vacuole acts as part of a protective mechanism that prevents the cell from absorbing too much water and possibly lysing (rupturing) through excessive internal pressure.

Water always flows first from outside the cell into the cytoplasm, and is only then moved from the cytoplasm into the contractile vacuole for expulsion. Species that possess a contractile vacuole typically always use the organelle, even at very hypertonic (high concentration of solutes) environments, since the cell tends to adjust its cytoplasm to become even more hyperosmotic than the environment. The amount of water expelled from the cell and the rate of contraction are related to the osmolarity of the environment. In hyperosmotic environments, less water will be expelled and the contraction cycle will be longer.

Paramecium and Amoeba possess large contractile vacuoles (average diameter of 13 and 45 µm, respectively), which are relatively comfortable to isolate, manipulate and assay. The smallest known contractile vacuoles belong to Chlamydomonas, with a diameter of 1.5 µm. In Paramecium, which has one of the most complex contractile vacuoles, the vacuole is surrounded by several canals, which absorb water by osmosis from the cytoplasm. After the canals fill with water, the water is pumped into the vacuole. When the vacuole is full, it expels the water through a pore in the cytoplasm which can be opened and closed.[2] Other protists, such as Amoeba, have CVs that move to the surface of the cell when full and undergo exocytosis. In Amoeba contractile vacuoles collect excretory waste, such as ammonia, from the intracellular fluid by both diffusion and active transport.

Water flow into the CV 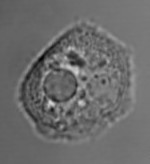 The way in which water enters the CV had been a mystery for many years, but several discoveries since the 1990s have improved understanding of this issue. Water could theoretically cross the CV membrane by osmosis, but only if the inside of the CV is hyperosmotic (higher solute concentration) to the cytoplasm. The discovery of proton pumps in the CV membrane[3] and the direct measurement of ion concentrations inside the CV using microelectrodes[4] led to the following model: the pumping of protons either into or out of the CV causes different ions to enter the CV. For example, some proton pumps work as cation exchangers, whereby a proton is pumped out of the CV and a cation is pumped at the same time into the CV. In other cases, protons pumped into the CV drag anions with them (carbonate, for example), to balance the pH. This ion flux into the CV causes an increase in CV osmolarity and as a result water enters the CV by osmosis. Water has been shown in at least some species to enter the CV through aquaporins.[5]

The CV indeed does not exist in higher organisms, but some of its unique characteristics are used by the former in their own osmoregulatory mechanisms. Research on the CV can therefore help us understand how osmoregulation works in all species. Many issues regarding the CV remain, as of 2010, unsolved: