The ammonium cation is a positively charged polyatomic ion with the chemical formula NH+4. It is formed by the protonation of ammonia (NH3). Ammonium is also a general name for positively charged or protonated substituted amines and quaternary ammonium cations (NR+4), where one or more hydrogen atoms are replaced by organic groups (indicated by R). 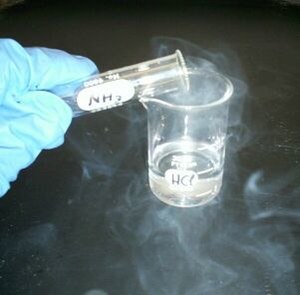 The ammonium ion is generated when ammonia, a weak base, reacts with Brønsted acids (proton donors):

The ammonium ion is mildly acidic, reacting with Brønsted bases to return to the uncharged ammonia molecule:

Thus, treatment of concentrated solutions of ammonium salts with strong base gives ammonia. When ammonia is dissolved in water, a tiny amount of it converts to ammonium ions:

Formation of ammonium compounds can also occur in the vapor phase; for example, when ammonia vapor comes in contact with hydrogen chloride vapor, a white cloud of ammonium chloride forms, which eventually settles out as a solid in a thin white layer on surfaces.

Ammonium cation is found in a variety of salts such as ammonium carbonate, ammonium chloride and ammonium nitrate. Most simple ammonium salts are very soluble in water. An exception is ammonium hexachloroplatinate, the formation of which was once used as a test for ammonium. The ammonium salts of nitrate and especially perchlorate are highly explosive, in these cases ammonium is the reducing agent.

In an unusual process, ammonium ions form an amalgam. Such species are prepared by the addition of sodium amalgam to a solution of ammonium chloride.[2] This amalgam eventually decomposes to release ammonia and hydrogen.[3]

To find whether the ammonium ion is present in the salt, first the salt is heated in presence of alkali hydroxide releasing a gas with characteristic smell which of course is ammonia.

Ammonia or ammonium ion when added to Nessler's reagent gives brown color precipitate known as iodide of Million's base in basic medium.

The lone electron pair on the nitrogen atom (N) in ammonia, represented as a line above the N, forms the bond with a proton (H+). Thereafter, all four N–H bonds are equivalent, being polar covalent bonds. The ion has a tetrahedral structure and is isoelectronic with methane and borohydride. In terms of size, the ammonium cation (rionic = 175 pm) resembles the caesium cation (rionic = 183 pm).

An example of a reaction forming an ammonium ion is that between dimethylamine, (CH3)2NH, and an acid to give the dimethylammonium cation, (CH3)2NH+2:

Quaternary ammonium cations have four organic groups attached to the nitrogen atom, they lack a hydrogen atom bonded to the nitrogen atom. These cations, such as the tetra-n-butylammonium cation, are sometimes used to replace sodium or potassium ions to increase the solubility of the associated anion in organic solvents. Primary, secondary, and tertiary ammonium salts serve the same function, but are less lipophilic. They are also used as phase-transfer catalysts and surfactants.

An unusual class of organic ammonium salts are derivatives of amine radical cations, R3N+• such as tris(4-bromophenyl)ammoniumyl hexachloroantimonate.

Ammonium ions are a waste product of the metabolism of animals. In fish and aquatic invertebrates, it is excreted directly into the water. In mammals, sharks, and amphibians, it is converted in the urea cycle to urea, because urea is less toxic and can be stored more efficiently. In birds, reptiles, and terrestrial snails, metabolic ammonium is converted into uric acid, which is solid and can therefore be excreted with minimal water loss.[4]

Ammonium is an important source of nitrogen for many plant species, especially those growing on hypoxic soils. However, it is also toxic to most crop species and is rarely applied as a sole nitrogen source.[5]

The ammonium ion has very similar properties to the heavier alkali metals cations and is often considered a close equivalent.[6][7][8] Ammonium is expected to behave as a metal (NH+4 ions in a sea of electrons) at very high pressures, such as inside gas giant planets such as Uranus and Neptune.[7][8]

Under normal conditions, ammonium does not exist as a pure metal, but does as an amalgam (alloy with mercury).[9]