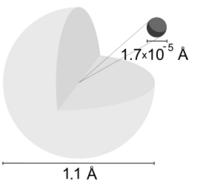 Depiction of a hydrogen atom showing the diameter as about twice the Bohr model radius. (Image not to scale)

A hydrogen atom is an atom of the chemical element hydrogen. The electrically neutral atom contains a single positively charged proton and a single negatively charged electron bound to the nucleus by the Coulomb force. Atomic hydrogen constitutes about 75% of the baryonic mass of the universe.[1]

Atomic spectroscopy shows that there is a discrete infinite set of states in which a hydrogen (or any) atom can exist, contrary to the predictions of classical physics. Attempts to develop a theoretical understanding of the states of the hydrogen atom have been important to the history of quantum mechanics, since all other atoms can be roughly understood by knowing in detail about this simplest atomic structure.

The most abundant isotope, hydrogen-1, protium, or light hydrogen, contains no neutrons and is simply a proton and an electron. Protium is stable and makes up 99.985% of naturally occurring hydrogen atoms.[2]

Deuterium contains one neutron and one proton in its nucleus. Deuterium is stable and makes up 0.0156% of naturally occurring hydrogen[2] and is used in industrial processes like nuclear reactors and Nuclear Magnetic Resonance.

Tritium contains two neutrons and one proton in its nucleus and is not stable, decaying with a half-life of 12.32 years. Because of its short half-life, tritium does not exist in nature except in trace amounts.

Heavier isotopes of hydrogen are only created artificially in particle accelerators and have half-lives on the order of 10−22 seconds. They are unbound resonances located beyond the neutron drip line; this results in prompt emission of a neutron.

The formulas below are valid for all three isotopes of hydrogen, but slightly different values of the Rydberg constant (correction formula given below) must be used for each hydrogen isotope.

If a neutral hydrogen atom loses its electron, it becomes a cation. The resulting ion, which consists solely of a proton for the usual isotope, is written as "H+" and sometimes called hydron. Free protons are common in the interstellar medium, and solar wind. In the context of aqueous solutions of classical Brønsted–Lowry acids, such as hydrochloric acid, it is actually hydronium, H3O+, that is meant. Instead of a literal ionized single hydrogen atom being formed, the acid transfers the hydrogen to H2O, forming H3O+.

If instead a hydrogen atom gains a second electron, it becomes an anion. The hydrogen anion is written as "H–" and called hydride.

The hydrogen atom has special significance in quantum mechanics and quantum field theory as a simple two-body problem physical system which has yielded many simple analytical solutions in closed-form.

Experiments by Ernest Rutherford in 1909 showed the structure of the atom to be a dense, positive nucleus with a tenuous negative charge cloud around it. This immediately raised questions about how such a system could be stable. Classical electromagnetism had shown that any accelerating charge radiates energy, as shown by the Larmor formula. If the electron is assumed to orbit in a perfect circle and radiates energy continuously, the electron would rapidly spiral into the nucleus with a fall time of:[3] [math]\displaystyle{ t_\text{fall} \approx \frac{ a_0^3}{4 r_0^2 c} \approx 1.6 \times 10^{-11} \text{ s} , }[/math] where [math]\displaystyle{ a_0 }[/math] is the Bohr radius and [math]\displaystyle{ r_0 }[/math] is the classical electron radius. If this were true, all atoms would instantly collapse, however atoms seem to be stable. Furthermore, the spiral inward would release a smear of electromagnetic frequencies as the orbit got smaller. Instead, atoms were observed to only emit discrete frequencies of radiation. The resolution would lie in the development of quantum mechanics.

In 1913, Niels Bohr obtained the energy levels and spectral frequencies of the hydrogen atom after making a number of simple assumptions in order to correct the failed classical model. The assumptions included:

The exact value of the Rydberg constant assumes that the nucleus is infinitely massive with respect to the electron. For hydrogen-1, hydrogen-2 (deuterium), and hydrogen-3 (tritium) which have finite mass, the constant must be slightly modified to use the reduced mass of the system, rather than simply the mass of the electron. This includes the kinetic energy of the nucleus in the problem, because the total (electron plus nuclear) kinetic energy is equivalent to the kinetic energy of the reduced mass moving with a velocity equal to the electron velocity relative to the nucleus. However, since the nucleus is much heavier than the electron, the electron mass and reduced mass are nearly the same. The Rydberg constant RM for a hydrogen atom (one electron), R is given by [math]\displaystyle{ R_M = \frac{R_\infty}{1+m_{\text{e}}/M}, }[/math] where [math]\displaystyle{ M }[/math] is the mass of the atomic nucleus. For hydrogen-1, the quantity [math]\displaystyle{ m_{\text{e}}/M, }[/math] is about 1/1836 (i.e. the electron-to-proton mass ratio). For deuterium and tritium, the ratios are about 1/3670 and 1/5497 respectively. These figures, when added to 1 in the denominator, represent very small corrections in the value of R, and thus only small corrections to all energy levels in corresponding hydrogen isotopes.

There were still problems with Bohr's model:

Most of these shortcomings were resolved by Arnold Sommerfeld's modification of the Bohr model. Sommerfeld introduced two additional degrees of freedom, allowing an electron to move on an elliptical orbit characterized by its eccentricity and declination with respect to a chosen axis. This introduced two additional quantum numbers, which correspond to the orbital angular momentum and its projection on the chosen axis. Thus the correct multiplicity of states (except for the factor 2 accounting for the yet unknown electron spin) was found. Further, by applying special relativity to the elliptic orbits, Sommerfeld succeeded in deriving the correct expression for the fine structure of hydrogen spectra (which happens to be exactly the same as in the most elaborate Dirac theory). However, some observed phenomena, such as the anomalous Zeeman effect, remained unexplained. These issues were resolved with the full development of quantum mechanics and the Dirac equation. It is often alleged that the Schrödinger equation is superior to the Bohr–Sommerfeld theory in describing hydrogen atom. This is not the case, as most of the results of both approaches coincide or are very close (a remarkable exception is the problem of hydrogen atom in crossed electric and magnetic fields, which cannot be self-consistently solved in the framework of the Bohr–Sommerfeld theory), and in both theories the main shortcomings result from the absence of the electron spin. It was the complete failure of the Bohr–Sommerfeld theory to explain many-electron systems (such as helium atom or hydrogen molecule) which demonstrated its inadequacy in describing quantum phenomena.

The Schrödinger equation allows one to calculate the stationary states and also the time evolution of quantum systems. Exact analytical answers are available for the nonrelativistic hydrogen atom. Before we go to present a formal account, here we give an elementary overview. 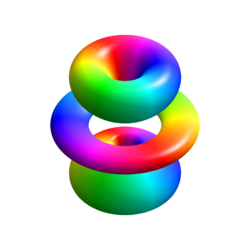 3D illustration of the eigenstate [math]\displaystyle{ \psi_{4, 3, 1} }[/math]. Electrons in this state are 45% likely to be found within the solid body shown.

The quantum numbers can take the following values:

The solutions to the Schrödinger equation for hydrogen are analytical, giving a simple expression for the hydrogen energy levels and thus the frequencies of the hydrogen spectral lines and fully reproduced the Bohr model and went beyond it. It also yields two other quantum numbers and the shape of the electron's wave function ("orbital") for the various possible quantum-mechanical states, thus explaining the anisotropic character of atomic bonds.

The Schrödinger equation also applies to more complicated atoms and molecules. When there is more than one electron or nucleus the solution is not analytical and either computer calculations are necessary or simplifying assumptions must be made.

In 1928, Paul Dirac found an equation that was fully compatible with special relativity, and (as a consequence) made the wave function a 4-component "Dirac spinor" including "up" and "down" spin components, with both positive and "negative" energy (or matter and antimatter). The solution to this equation gave the following results, more accurate than the Schrödinger solution. 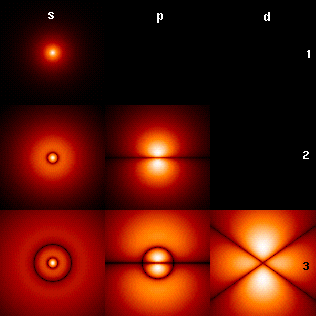 Probability densities through the xz-plane for the electron at different quantum numbers (ℓ, across top; n, down side; m = 0)

The image to the right shows the first few hydrogen atom orbitals (energy eigenfunctions). These are cross-sections of the probability density that are color-coded (black represents zero density and white represents the highest density). The angular momentum (orbital) quantum number ℓ is denoted in each column, using the usual spectroscopic letter code (s means ℓ = 0, p means ℓ = 1, d means ℓ = 2). The main (principal) quantum number n (= 1, 2, 3, ...) is marked to the right of each row. For all pictures the magnetic quantum number m has been set to 0, and the cross-sectional plane is the xz-plane (z is the vertical axis). The probability density in three-dimensional space is obtained by rotating the one shown here around the z-axis.

The "ground state", i.e. the state of lowest energy, in which the electron is usually found, is the first one, the 1s state (principal quantum level n = 1, ℓ = 0).

Black lines occur in each but the first orbital: these are the nodes of the wavefunction, i.e. where the probability density is zero. (More precisely, the nodes are spherical harmonics that appear as a result of solving the Schrödinger equation in spherical coordinates.)

The quantum numbers determine the layout of these nodes.[16] There are:

Features going beyond the Schrödinger solution

There are several important effects that are neglected by the Schrödinger equation and which are responsible for certain small but measurable deviations of the real spectral lines from the predicted ones:

Both of these features (and more) are incorporated in the relativistic Dirac equation, with predictions that come still closer to experiment. Again the Dirac equation may be solved analytically in the special case of a two-body system, such as the hydrogen atom. The resulting solution quantum states now must be classified by the total angular momentum number j (arising through the coupling between electron spin and orbital angular momentum). States of the same j and the same n are still degenerate. Thus, direct analytical solution of Dirac equation predicts 2S(1/2) and 2P(1/2) levels of hydrogen to have exactly the same energy, which is in a contradiction with observations (Lamb–Retherford experiment).

For these developments, it was essential that the solution of the Dirac equation for the hydrogen atom could be worked out exactly, such that any experimentally observed deviation had to be taken seriously as a signal of failure of the theory.

Alternatives to the Schrödinger theory

In the language of Heisenberg's matrix mechanics, the hydrogen atom was first solved by Wolfgang Pauli[17] using a rotational symmetry in four dimensions [O(4)-symmetry] generated by the angular momentum and the Laplace–Runge–Lenz vector. By extending the symmetry group O(4) to the dynamical group O(4,2), the entire spectrum and all transitions were embedded in a single irreducible group representation.[18]

In 1979 the (non-relativistic) hydrogen atom was solved for the first time within Feynman's path integral formulation of quantum mechanics by Duru and Kleinert.[19][20] This work greatly extended the range of applicability of Feynman's method.