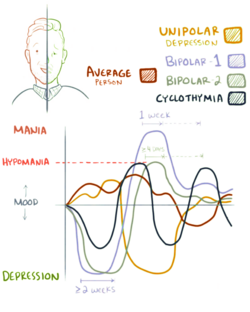 A mood swing is an extreme or rapid change in mood. Such mood swings can play a positive part in promoting problem solving and in producing flexible forward planning.[1] However, when mood swings are so strong that they are disruptive, they may be the main part of a bipolar disorder.[2]

Mood swings can happen any time at any place, varying from the microscopic to the wild oscillations of bipolar disorder,[3] so that a continuum can be traced from normal struggles around self-esteem, through cyclothymia, up to a depressive disease.[4] However most people's mood swings remain in the mild to moderate range of emotional ups and downs.[5] The duration of bipolar mood swings also varies. They may last a few hours - ultrarapid - or extend over days - ultradian: clinicians maintain that only when four continuous days of hypomania, or seven days of mania, occur, is a diagnosis of bipolar disorder justified.[6] In such cases, mood swings can extend over several days, even weeks: these episodes may consist of rapid alternation between feelings of depression and euphoria.[7]

Changes in a person's energy level, sleep patterns, self-esteem, concentration, drug or alcohol use can be signs of an oncoming mood disorder.[8]

Many different things might trigger mood swings, from unhealthy diet or lifestyle to drug abuse or hormonal imbalance.

Other major causes of mood swings (besides bipolar disorder and major depression) include diseases/disorders which interfere with nervous system function. Attention deficit hyperactivity disorder (ADHD), epilepsy,[9] and autism spectrum are three such examples.[10][11]

Not eating on time can contribute, or eating too much sugar, can cause fluctuations in blood sugar, which can cause mood swings.[15][16]

Cognitive behavioral therapy recommends using emotional dampeners to break the self-reinforcing tendencies of either manic or depressive mood swings.[19] Exercise, treats, seeking out small (and easily attainable) triumphs, and using vicarious distractions like reading or watching TV, are among the techniques found to be regularly used by people in breaking depressive swings.[20]

Learning to bring oneself down from grandiose states of mind, or up from exaggerated shame states, is part of taking a proactive approach to managing one's own moods and varying sense of self-esteem.[21]