In chemistry and atomic physics, an electron shell may be thought of as an orbit followed by electrons around an atom's nucleus. The closest shell to the nucleus is called the "1 shell" (also called the "K shell"), followed by the "2 shell" (or "L shell"), then the "3 shell" (or "M shell"), and so on farther and farther from the nucleus. The shells correspond to the principal quantum numbers (n = 1, 2, 3, 4 ...) or are labeled alphabetically with the letters used in X-ray notation (K, L, M, ...).

"From the above we are led to the following possible scheme for the arrangement of the electrons in light atoms:

Periodic table of Bohr in 1913 showing electron configurations in his second paper where he went to the 24th element.[4][5]

The shell terminology comes from Arnold Sommerfeld's modification of the Bohr model. During this period Bohr was working with Walther Kossel, whose papers in 1914 and in 1916 called the orbits "shells".[6][7] Sommerfeld retained Bohr's planetary model, but added mildly elliptical orbits (characterized by additional quantum numbers ℓ and m) to explain the fine spectroscopic structure of some elements.[8] The multiple electrons with the same principal quantum number (n) had close orbits that formed a "shell" of positive thickness instead of the circular orbit of Bohr's model which orbits called "rings" were described by a plane.[9]

The existence of electron shells was first observed experimentally in Charles Barkla's and Henry Moseley's X-ray absorption studies. Moseley's work did not directly concern the study of electron shells, because he was trying to prove that the periodic table was not arranged by weight, but by the charge of the protons in the nucleus.[10] However, because in a neutral atom, the number of electrons equals the number of protons, this work was extremely important to Niels Bohr who mentioned Moseley's work several times in his interview of 1962.[11] Moseley was part of Rutherford's group, as was Niels Bohr. Moseley measured the frequencies of X-rays emitted by every element between calcium and zinc, and found that the frequencies became greater as the elements got heavier, leading to the theory that electrons were emitting X-rays when they were shifted to lower shells.[12] This led to the conclusion that the electrons were in Kossel's shells with a definite limit per shell, labeling the shells with the letters K, L, M, N, O, P, and Q.[5][13] The origin of this terminology was alphabetic. Barkla, who worked independently from Moseley as an X-ray spectrometry experimentalist, first noticed two distinct types of scattering from shooting X-rays at elements in 1909 and named them "A" and "B". Barkla described these two types of X-ray diffraction: the first was unconnected with the type of material used in the experiment, and could be polarized. The other second diffraction beam he called "fluorescent" because it depended on the irradiated material.[14] It was not known what these lines meant at the time, but in 1911 Barkla decided there might be scattering lines previous to "A", so he began at "K".[15] However, later experiments indicated that the K absorption lines are produced by the innermost electrons. These letters were later found to correspond to the n values 1, 2, 3, etc. that were used in the Bohr model. They are used in the spectroscopic Siegbahn notation.

The work of assigning electrons to shells was continued from 1913 to 1925 by many chemists and a few physicists. Niels Bohr was one of the few physicists who followed the chemist's work[16] of defining the periodic table, while Arnold Sommerfeld worked more on trying to make a relativistic working model of the atom that would explain the fine structure of the spectra from a classical orbital physics standpoint through the Atombau approach.[5] Einstein and Rutherford, who did not follow chemistry, were unaware of the chemists who were developing electron shell theories of the periodic table from a chemistry point of view, such as Irving Langmuir, Charles Bury, J.J. Thomson, and Gilbert Lewis, who all introduced corrections to Bohr's model such as a maximum of two electrons in the first shell, eight in the next and so on, and were responsible for explaining valency in the outer electron shells, and the building up of atoms by adding electrons to the outer shells.[17][5] So when Bohr outlined his electron shell atomic theory in 1922, there was no mathematical formula for the theory. So Rutherford said he was hard put "to form an idea of how you arrive at your conclusions".[18][19] Einstein said of Bohr's 1922 paper that his "electron-shells of the atoms together with their significance for chemistry appeared to me like a miracle – and appears to me as a miracle even today".[20] Arnold Sommerfeld, who had followed the Atombau structure of electrons instead of Bohr who was familiar with the chemists' views of electron structure, spoke of Bohr's 1921 lecture and 1922 article on the shell model as "the greatest advance in atomic structure since 1913".[5][21][18] However, the electron shell development of Niels Bohr was basically the same theory as that of the chemist Charles Rugeley Bury in his 1921 paper.[22][5][23]

However, the final form of the electron shell model still in use today for the number of electrons in shells was discovered in 1923 by Edmund Stoner, who introduced the principle that the nth shell was described by 2(n2). Seeing this in 1925, Wolfgang Pauli added a fourth quantum number, "spin", during the old quantum theory period of the Sommerfeld-Bohr Solar System atom to complete the modern electron shell theory.[5] 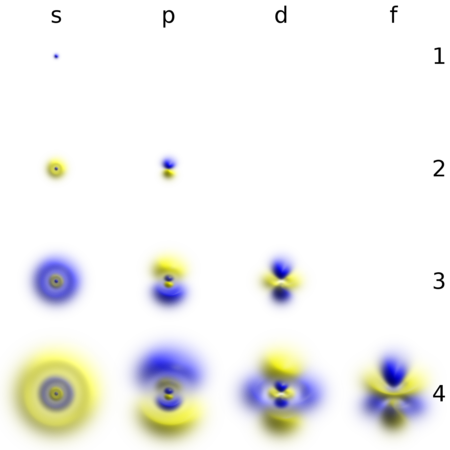 3D views of some hydrogen-like atomic orbitals showing probability density and phase (g orbitals and higher are not shown).

Each shell is composed of one or more subshells, which are themselves composed of atomic orbitals. For example, the first (K) shell has one subshell, called 1s; the second (L) shell has two subshells, called 2s and 2p; the third shell has 3s, 3p, and 3d; the fourth shell has 4s, 4p, 4d and 4f; the fifth shell has 5s, 5p, 5d, and 5f and can theoretically hold more in the 5g subshell that is not occupied in the ground-state electron configuration of any known element.[2] The various possible subshells are shown in the following table:

Number of electrons in each shell

Each subshell is constrained to hold 4ℓ + 2 electrons at most, namely:

For multielectron atoms n is a poor indicator of electron's energy. Energy spectra of some shells interleave.

The states crossed by same red arrow have same [math]\displaystyle{ n + \ell }[/math] value. The direction of the red arrow indicates the order of state filling.

Although it is sometimes stated that all the electrons in a shell have the same energy, this is an approximation. However, the electrons in one subshell do have exactly the same level of energy, with later subshells having more energy per electron than earlier ones. This effect is great enough that the energy ranges associated with shells can overlap.

Because of this, the later shells are filled over vast sections of the periodic table. The K shell fills in the first period (hydrogen and helium), while the L shell fills in the second (lithium to neon). However, the M shell starts filling at sodium (element 11) but does not finish filling till copper (element 29), and the N shell is even slower: it starts filling at potassium (element 19) but does not finish filling till ytterbium (element 70). The O, P, and Q shells begin filling in the known elements, but they are not complete even at the heaviest known element, oganesson (element 118).

The list below gives the elements arranged by increasing atomic number and shows the number of electrons per shell. At a glance, the subsets of the list show obvious patterns. In particular, every set of five elements (in   electric blue) before each noble gas (group 18, in   yellow) heavier than helium have successive numbers of electrons in the outermost shell, namely three to seven.

Sorting the table by chemical group shows additional patterns, especially with respect to the last two outermost shells. (Elements 57 to 71 belong to the lanthanides, while 89 to 103 are the actinides.)

The list below is primarily consistent with the Aufbau principle. However, there are a number of exceptions to the rule; for example palladium (atomic number 46) has no electrons in the fifth shell, unlike other atoms with lower atomic number. The elements past 108 have such short half-lives that their electron configurations have not yet been measured, and so predictions have been inserted instead.