Short description: Atoms with a single valence electron, so they behave like hydrogen

A hydrogen-like atom (or hydrogenic atom) is any atom or ion with a single valence electron. These atoms are isoelectronic with hydrogen. Examples of hydrogen-like atoms include, but are not limited to, hydrogen itself, all alkali metals such as Rb and Cs, singly ionized alkaline earth metals such as Ca+ and Sr+ and other ions such as He+, Li2+, and Be3+ and isotopes of any of the above. A hydrogen-like atom includes a positively charged core consisting of the atomic nucleus and any core electrons as well as a single valence electron. Because helium is common in the universe, the spectroscopy of singly ionized helium is important in EUV astronomy, for example, of DO white dwarf stars.

The non-relativistic Schrödinger equation and relativistic Dirac equation for the hydrogen atom can be solved analytically, owing to the simplicity of the two-particle physical system. The one-electron wave function solutions are referred to as hydrogen-like atomic orbitals. Hydrogen-like atoms are of importance because their corresponding orbitals bear similarity to the hydrogen atomic orbitals.

Other systems may also be referred to as "hydrogen-like atoms", such as muonium (an electron orbiting an antimuon), positronium (an electron and a positron), certain exotic atoms (formed with other particles), or Rydberg atoms (in which one electron is in such a high energy state that it sees the rest of the atom effectively as a point charge).

The Schrödinger equation of atoms or ions with more than one electron has not been solved analytically, because of the computational difficulty imposed by the Coulomb interaction between the electrons. Numerical methods must be applied in order to obtain (approximate) wavefunctions or other properties from quantum mechanical calculations. Due to the spherical symmetry (of the Hamiltonian), the total angular momentum J of an atom is a conserved quantity. Many numerical procedures start from products of atomic orbitals that are eigenfunctions of the one-electron operators L and Lz. The radial parts of these atomic orbitals are sometimes numerical tables or are sometimes Slater orbitals. By angular momentum coupling many-electron eigenfunctions of J2 (and possibly S2) are constructed.

In quantum chemical calculations hydrogen-like atomic orbitals cannot serve as an expansion basis, because they are not complete. The non-square-integrable continuum (E > 0) states must be included to obtain a complete set, i.e., to span all of one-electron Hilbert space.[1]

In the simplest model, the atomic orbitals of hydrogen-like atoms/ions are solutions to the Schrödinger equation in a spherically symmetric potential. In this case, the potential term is the potential given by Coulomb's law: [math]\displaystyle{ V(r) = -\frac{1}{4 \pi \varepsilon_0} \frac{Ze^2}{r} }[/math] where 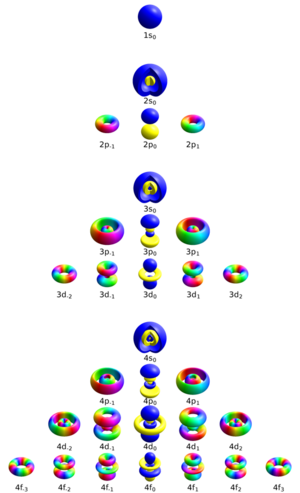 Complete set of [math]\displaystyle{ \psi_{nlm} }[/math] eigenfunctions up to n = 4. The solid orbitals enclose the volume above a certain probability density threshold. The colors depict the complex phase.

The projection of this vector onto an arbitrary direction is quantized. If the arbitrary direction is called z, the quantization is given by: [math]\displaystyle{ \hat{L}_z Y_{\ell m} = \hbar m Y_{\ell m}, }[/math] where m is restricted as described above. Note that L2 and Lz commute and have a common eigenstate, which is in accordance with Heisenberg's uncertainty principle. Since Lx and Ly do not commute with Lz, it is not possible to find a state that is an eigenstate of all three components simultaneously. Hence the values of the x and y components are not sharp, but are given by a probability function of finite width. The fact that the x and y components are not well-determined, implies that the direction of the angular momentum vector is not well determined either, although its component along the z-axis is sharp.

These relations do not give the total angular momentum of the electron. For that, electron spin must be included.

This quantization of angular momentum closely parallels that proposed by Niels Bohr (see Bohr model) in 1913, with no knowledge of wavefunctions.

In a real atom, the spin of a moving electron can interact with the electric field of the nucleus through relativistic effects, a phenomenon known as spin–orbit interaction. When one takes this coupling into account, the spin and the orbital angular momentum are no longer conserved, which can be pictured by the electron precessing. Therefore, one has to replace the quantum numbers l, m and the projection of the spin ms by quantum numbers that represent the total angular momentum (including spin), j and mj, as well as the quantum number of parity.

See the next section on the Dirac equation for a solution that includes the coupling.

In 1928 in England Paul Dirac found an equation that was fully compatible with special relativity. The equation was solved for hydrogen-like atoms the same year (assuming a simple Coulomb potential around a point charge) by the German Walter Gordon. Instead of a single (possibly complex) function as in the Schrödinger equation, one must find four complex functions that make up a bispinor. The first and second functions (or components of the spinor) correspond (in the usual basis) to spin "up" and spin "down" states, as do the third and fourth components.

The terms "spin up" and "spin down" are relative to a chosen direction, conventionally the z direction. An electron may be in a superposition of spin up and spin down, which corresponds to the spin axis pointing in some other direction. The spin state may depend on location.

An electron in the vicinity of a nucleus necessarily has non-zero amplitudes for the third and fourth components. Far from the nucleus these may be small, but near the nucleus they become large.

These can be additionally labeled with a subscript giving m. There are 2n2 states with principal quantum number n, 4j+2 of them with any allowed j except the highest (j=n−1/2) for which there are only 2j+1. Since the orbitals having given values of n and j have the same energy according to the Dirac equation, they form a basis for the space of functions having that energy.

(The energy of course depends on the zero-point used.) Note that if Z were able to be more than 137 (higher than any known element) then we would have a negative value inside the square root for the S1/2 and P1/2 orbitals, which means they would not exist. The Schrödinger solution corresponds to replacing the inner bracket in the second expression by 1. The accuracy of the energy difference between the lowest two hydrogen states calculated from the Schrödinger solution is about 9 ppm (90 μeV too low, out of around 10 eV), whereas the accuracy of the Dirac equation for the same energy difference is about 3 ppm (too high). The Schrödinger solution always puts the states at slightly higher energies than the more accurate Dirac equation. The Dirac equation gives some levels of hydrogen quite accurately (for instance the 4P1/2 state is given an energy only about 2×10−10 eV too high), others less so (for instance, the 2S1/2 level is about 4×10−6 eV too low).[2] The modifications of the energy due to using the Dirac equation rather than the Schrödinger solution is of the order of α2, and for this reason α is called the fine-structure constant.

The solution to the Dirac equation for quantum numbers n, k, and m, is:

Here is the behavior of some of these angular functions. The normalization factor is left out to simplify the expressions.

where A is a normalization constant involving the gamma function:

Notice that because of the factor Zα, f(r) is small compared to g(r). Also notice that in this case, the energy is given by

and the radial decay constant C by

with A now defined as

Again f is small compared to g (except at very small r) because when k is positive the first terms dominate, and α is big compared to γ−k, whereas when k is negative the second terms dominate and α is small compared to γ−k. Note that the dominant term is quite similar to corresponding the Schrödinger solution – the upper index on the Laguerre polynomial is slightly less (2γ+1 or 2γ−1 rather than 2ℓ+1, which is the nearest integer), as is the power of ρ (γ or γ−1 instead of ℓ, the nearest integer). The exponential decay is slightly faster than in the Schrödinger solution.

The normalization factor makes the integral over all space of the square of the absolute value equal to 1.

Here is the 1S1/2 orbital, spin up, without normalization:

Note that γ is a little less than 1, so the top function is similar to an exponentially decreasing function of r except that at very small r it theoretically goes to infinity. But the value of the [math]\displaystyle{ r^{\gamma-1} }[/math] only surpasses 10 at a value of r smaller than [math]\displaystyle{ 10^{1/(\gamma-1)}, }[/math] which is a very small number (much less than the radius of a proton) unless Z is very large.

The 1S1/2 orbital, spin down, without normalization, comes out as:

We can mix these in order to obtain orbitals with the spin oriented in some other direction, such as:

which corresponds to the spin and angular momentum axis pointing in the x direction. Adding i times the "down" spin to the "up" spin gives an orbital oriented in the y direction.

To give another example, the 2P1/2 orbital, spin up, is proportional to:

(Remember that [math]\displaystyle{ \rho=2rC }[/math]. C is about half what it is for the 1S orbital, but γ is still the same.)

Now the first component is S-like and there is a radius near ρ = 2 where it goes to zero, whereas the bottom two-component part is P-like.

In addition to bound states, in which the energy is less than that of an electron infinitely separated from the nucleus, there are solutions to the Dirac equation at higher energy, corresponding to an unbound electron interacting with the nucleus. These solutions are not normalizable, but solutions can be found which tend toward zero as r goes to infinity (which is not possible when [math]\displaystyle{ |E|\lt \mu c^2 }[/math] except at the above-mentioned bound-state values of E). There are similar solutions with [math]\displaystyle{ E\lt -\mu c^2. }[/math] These negative-energy solutions are just like positive-energy solutions having the opposite energy but for a case in which the nucleus repels the electron instead of attracting it, except that the solutions for the top two components switch places with those for the bottom two.

Negative-energy solutions to Dirac's equation exist even in the absence of a Coulomb force exerted by a nucleus. Dirac hypothesized that we can consider almost all of these states to be already filled. If one of these negative-energy states is not filled, this manifests itself as though there is an electron which is repelled by a positively-charged nucleus. This prompted Dirac to hypothesize the existence of positively-charged electrons, and his prediction was confirmed with the discovery of the positron.

Beyond Gordon's solution to the Dirac equation

The Dirac equation with a simple Coulomb potential generated by a point-like non-magnetic nucleus was not the last word, and its predictions differ from experimental results as mentioned earlier. More accurate results include the Lamb shift (radiative corrections arising from quantum electrodynamics)[3] and hyperfine structure.