Short description: Notation for conserved quantities in physics and chemistry 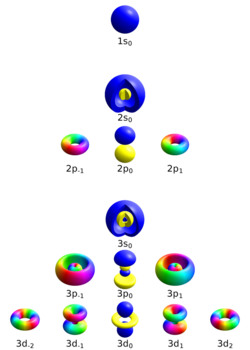 Single electron orbitals for hydrogen-like atoms with quantum numbers n = 1, 2, 3 (blocks), ℓ (rows) and m (columns). The spin s is not visible, because it has no spatial dependence.

In quantum physics and chemistry, quantum numbers describe values of conserved quantities in the dynamics of a quantum system. Quantum numbers correspond to eigenvalues of operators that commute with the Hamiltonian—quantities that can be known with precision at the same time as the system's energy[note 1]—and their corresponding eigenspaces. Together, a specification of all of the quantum numbers of a quantum system fully characterize a basis state of the system, and can in principle be measured together.

An important aspect of quantum mechanics is the quantization of many observable quantities of interest.[note 2] In particular, this leads to quantum numbers that take values in discrete sets of integers or half-integers; although they could approach infinity in some cases. This distinguishes quantum mechanics from classical mechanics where the values that characterize the system such as mass, charge, or momentum, all range continuously. Quantum numbers often describe specifically the energy levels of electrons in atoms, but other possibilities include angular momentum, spin, etc. An important family is flavour quantum numbers – internal quantum numbers which determine the type of a particle and its interactions with other particles through the fundamental forces. Any quantum system can have one or more quantum numbers; it is thus difficult to list all possible quantum numbers.

Quantum numbers needed for a given system

Electron in an atom

Four quantum numbers can describe an electron in an atom completely:

The spin–orbital interaction, however, relates these numbers. Thus, a complete description of the system can be given with fewer quantum numbers, if orthogonal choices are made for these basis vectors.

Different electrons in a system will have different quantum numbers. For example, the highest occupied orbital electron, the actual differentiating electron (i.e. the electron that differentiates an element from the previous one); , r the differentiating electron according to the aufbau approximation. In lanthanum, as a further illustration, the electrons involved are in the 6s; 5d; and 4f orbitals, respectively. In this case the principal quantum numbers are 6, 5, and 4.

The principal quantum number describes the electron shell, or energy level, of an electron. The value of n ranges from 1 to the shell containing the outermost electron of that atom, that is[1]

For example, in caesium (Cs), the outermost valence electron is in the shell with energy level 6, so an electron in caesium can have an n value from 1 to 6.

For particles in a time-independent potential (see Schrödinger equation), it also labels the nth eigenvalue of Hamiltonian (H), that is, the energy E, with the contribution due to angular momentum (the term involving J2) left out. So this number depends only on the distance between the electron and the nucleus (that is, the radial coordinate r). The average distance increases with n. Hence quantum states with different principal quantum numbers are said to belong to different shells.

Shape of orbital is also given by azimuthal quantum number.

The magnetic quantum number describes the specific orbital (or "cloud") within that subshell, and yields the projection of the orbital angular momentum along a specified axis:

In general, the values of ms range from −s to s, where s is the spin quantum number, associated with the particle's intrinsic spin angular momentum:[3]

An electron has spin number s = 1/2, consequently ms will be ±1/2, referring to "spin up" and "spin down" states. Each electron in any individual orbital must have different quantum numbers because of the Pauli exclusion principle, therefore an orbital never contains more than two electrons.

There are no universal fixed values for mℓ and ms. Rather, the mℓ and ms values are arbitrary. The only restrictions on the choices for these constants is that the naming schematic used within a particular set of calculations or descriptions must be consistent (e.g. the orbital occupied by the first electron in a p orbital could be described as mℓ = −1 or mℓ = 0 or mℓ = 1, but the mℓ value of the next unpaired electron in that orbital must be different; yet, the mℓ assigned to electrons in other orbitals again can be mℓ = −1 or mℓ = 0 or mℓ = 1).

These rules are summarized as follows:

Results from spectroscopy indicated that up to two electrons can occupy a single orbital. However two electrons can never have the same exact quantum state nor the same set of quantum numbers according to Hund's rules, which addresses the Pauli exclusion principle. A fourth quantum number, which represented spin with two possible values, was added as an ad hoc assumption to resolve the conflict; this supposition would later be explained in detail by relativistic quantum mechanics and from the results of the renowned Stern–Gerlach experiment.

Many different models have been proposed throughout the history of quantum mechanics, but the most prominent system of nomenclature spawned from the Hund-Mulliken molecular orbital theory of Friedrich Hund, Robert S. Mulliken, and contributions from Schrödinger, Slater and John Lennard-Jones. This system of nomenclature incorporated Bohr energy levels, Hund-Mulliken orbital theory, and observations on electron spin based on spectroscopy and Hund's rules.[4]

Total angular momentum of a particle

When one takes the spin–orbit interaction into consideration, the L and S operators no longer commute with the Hamiltonian, and their eigenvalues therefore change over time. Thus another set of quantum numbers should be used. This set includes[5][6]

For example, consider the following 8 states, defined by their quantum numbers:

The quantum states in the system can be described as linear combination of these 8 states. However, in the presence of spin–orbit interaction, if one wants to describe the same system by 8 states that are eigenvectors of the Hamiltonian (i.e. each represents a state that does not mix with others over time), we should consider the following 8 states:

Note: The orbital angular momenta of the nuclear (and atomic) states are all integer multiples of ħ while the intrinsic angular momentum of the neutron and proton are half-integer multiples. It should be immediately apparent that the combination of the intrinsic spins of the nucleons with their orbital motion will always give half-integer values for the total spin, I, of any odd-A nucleus and integer values for any even-A nucleus.

Parity with the number I is used to label nuclear angular momentum states, examples for some isotopes of hydrogen (H), carbon (C), and sodium (Na) are;[7]

The reason for the unusual fluctuations in I, even by differences of just one nucleon, are due to the odd and even numbers of protons and neutrons – pairs of nucleons have a total angular momentum of zero (just like electrons in orbitals), leaving an odd or even number of unpaired nucleons. The property of nuclear spin is an important factor for the operation of NMR spectroscopy in organic chemistry,[6] and MRI in nuclear medicine,[7] due to the nuclear magnetic moment interacting with an external magnetic field.