In the general theory of relativity, the Einstein field equations (EFE; also known as Einstein's equations) relate the geometry of spacetime to the distribution of matter within it.[1]

Analogously to the way that electromagnetic fields are related to the distribution of charges and currents via Maxwell's equations, the EFE relate the spacetime geometry to the distribution of mass–energy, momentum and stress, that is, they determine the metric tensor of spacetime for a given arrangement of stress–energy–momentum in the spacetime. The relationship between the metric tensor and the Einstein tensor allows the EFE to be written as a set of nonlinear partial differential equations when used in this way. The solutions of the EFE are the components of the metric tensor. The inertial trajectories of particles and radiation (geodesics) in the resulting geometry are then calculated using the geodesic equation.

As well as implying local energy–momentum conservation, the EFE reduce to Newton's law of gravitation in the limit of a weak gravitational field and velocities that are much less than the speed of light.[4]

Exact solutions for the EFE can only be found under simplifying assumptions such as symmetry. Special classes of exact solutions are most often studied since they model many gravitational phenomena, such as rotating black holes and the expanding universe. Further simplification is achieved in approximating the spacetime as having only small deviations from flat spacetime, leading to the linearized EFE. These equations are used to study phenomena such as gravitational waves.

The Einstein field equations (EFE) may be written in the form:[5][1]

EFE on a wall in Leiden

The Einstein tensor is defined as [math]\displaystyle{ G_{\mu \nu} = R_{\mu \nu} - \frac{1}{2} R g_{\mu \nu}, }[/math] where Rμν is the Ricci curvature tensor, and R is the scalar curvature. This is a symmetric second-degree tensor that depends on only the metric tensor and its first and second derivatives.

In standard units, each term on the left has units of 1/length2.

These equations, together with the geodesic equation,[8] which dictates how freely falling matter moves through spacetime, form the core of the mathematical formulation of general relativity.

The EFE is a tensor equation relating a set of symmetric 4 × 4 tensors. Each tensor has 10 independent components. The four Bianchi identities reduce the number of independent equations from 10 to 6, leaving the metric with four gauge-fixing degrees of freedom, which correspond to the freedom to choose a coordinate system.

The equations are more complex than they appear. Given a specified distribution of matter and energy in the form of a stress–energy tensor, the EFE are understood to be equations for the metric tensor [math]\displaystyle{ g_{\mu \nu} }[/math], since both the Ricci tensor and scalar curvature depend on the metric in a complicated nonlinear manner. When fully written out, the EFE are a system of ten coupled, nonlinear, hyperbolic-elliptic partial differential equations.[10]

The above form of the EFE is the standard established by Misner, Thorne, and Wheeler (MTW).[11] The authors analyzed conventions that exist and classified these according to three signs ([S1] [S2] [S3]):

Reversing the trace again would restore the original EFE. The trace-reversed form may be more convenient in some cases (for example, when one is interested in weak-field limit and can replace [math]\displaystyle{ g_{\mu \nu} }[/math] in the expression on the right with the Minkowski metric without significant loss of accuracy).

Einstein then abandoned Λ, remarking to George Gamow "that the introduction of the cosmological term was the biggest blunder of his life".[17]

The inclusion of this term does not create inconsistencies. For many years the cosmological constant was almost universally assumed to be zero. More recent astronomical observations have shown an accelerating expansion of the universe, and to explain this a positive value of Λ is needed.[18][19] The cosmological constant is negligible at the scale of a galaxy or smaller.

Einstein thought of the cosmological constant as an independent parameter, but its term in the field equation can also be moved algebraically to the other side and incorporated as part of the stress–energy tensor: [math]\displaystyle{ T_{\mu \nu}^\mathrm{(vac)} = - \frac{\Lambda}{\kappa} g_{\mu \nu} \,. }[/math]

This tensor describes a vacuum state with an energy density ρvac and isotropic pressure pvac that are fixed constants and given by [math]\displaystyle{ \rho_\mathrm{vac} = - p_\mathrm{vac} = \frac{\Lambda}{\kappa}, }[/math] where it is assumed that Λ has SI unit m−2 and κ is defined as above.

Conservation of energy and momentum

The antisymmetry of the Riemann tensor allows the second term in the above expression to be rewritten:

which expresses the local conservation of stress–energy. This conservation law is a physical requirement. With his field equations Einstein ensured that general relativity is consistent with this conservation condition.

The nonlinearity of the EFE distinguishes general relativity from many other fundamental physical theories. For example, Maxwell's equations of electromagnetism are linear in the electric and magnetic fields, and charge and current distributions (i.e. the sum of two solutions is also a solution); another example is Schrödinger's equation of quantum mechanics, which is linear in the wavefunction.

The EFE reduce to Newton's law of gravity by using both the weak-field approximation and the slow-motion approximation. In fact, the constant G appearing in the EFE is determined by making these two approximations.

Derivation of Newton's law of gravity

Our simplifying assumptions make the squares of Γ disappear together with the time derivatives [math]\displaystyle{ R_{0 0} \approx \Gamma^i_{0 0 , i} \,. }[/math] 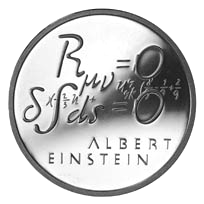 The solutions to the vacuum field equations are called vacuum solutions. Flat Minkowski space is the simplest example of a vacuum solution. Nontrivial examples include the Schwarzschild solution and the Kerr solution.

Additionally, the covariant Maxwell equations are also applicable in free space: [math]\displaystyle{ \begin{align} {F^{\alpha\beta}}_{;\beta} &= 0 \\ F_{[\alpha\beta;\gamma]}&=\tfrac{1}{3}\left(F_{\alpha\beta;\gamma} + F_{\beta\gamma;\alpha}+F_{\gamma\alpha;\beta}\right)=\tfrac{1}{3}\left(F_{\alpha\beta,\gamma} + F_{\beta\gamma,\alpha}+F_{\gamma\alpha,\beta}\right)= 0. \end{align} }[/math] where the semicolon represents a covariant derivative, and the brackets denote anti-symmetrization. The first equation asserts that the 4-divergence of the 2-form F is zero, and the second that its exterior derivative is zero. From the latter, it follows by the Poincaré lemma that in a coordinate chart it is possible to introduce an electromagnetic field potential Aα such that [math]\displaystyle{ F_{\alpha\beta} = A_{\alpha;\beta} - A_{\beta;\alpha} = A_{\alpha,\beta} - A_{\beta,\alpha} }[/math] in which the comma denotes a partial derivative. This is often taken as equivalent to the covariant Maxwell equation from which it is derived.[20] However, there are global solutions of the equation that may lack a globally defined potential.[21]

The solutions of the Einstein field equations are metrics of spacetime. These metrics describe the structure of the spacetime including the inertial motion of objects in the spacetime. As the field equations are non-linear, they cannot always be completely solved (i.e. without making approximations). For example, there is no known complete solution for a spacetime with two massive bodies in it (which is a theoretical model of a binary star system, for example). However, approximations are usually made in these cases. These are commonly referred to as post-Newtonian approximations. Even so, there are several cases where the field equations have been solved completely, and those are called exact solutions.[9]

The study of exact solutions of Einstein's field equations is one of the activities of cosmology. It leads to the prediction of black holes and to different models of evolution of the universe.

The nonlinearity of the EFE makes finding exact solutions difficult. One way of solving the field equations is to make an approximation, namely, that far from the source(s) of gravitating matter, the gravitational field is very weak and the spacetime approximates that of Minkowski space. The metric is then written as the sum of the Minkowski metric and a term representing the deviation of the true metric from the Minkowski metric, ignoring higher-power terms. This linearization procedure can be used to investigate the phenomena of gravitational radiation.

Substituting this definition of the inverse of the metric into the equations then multiplying both sides by a suitable power of det(g) to eliminate it from the denominator results in polynomial equations in the metric tensor and its first and second derivatives. The action from which the equations are derived can also be written in polynomial form by suitable redefinitions of the fields.[26]