Spodumene is a pyroxene mineral consisting of lithium aluminium inosilicate, LiAl(SiO3)2, and is a source of lithium. It occurs as colorless to yellowish, purplish, or lilac kunzite (see below), yellowish-green or emerald-green hiddenite, prismatic crystals, often of great size. Single crystals of 14.3 m (47 ft) in size are reported from the Black Hills of South Dakota, United States .[6][7]

The naturally-occurring low-temperature form α-spodumene is in the monoclinic system , and the high-temperature β-spodumene crystallizes in the tetragonal system. α-spodumene converts to β-spodumene at temperatures above 900 °C.[4] Crystals are typically heavily striated parallel to the principal axis. Crystal faces are often etched and pitted with triangular markings.

Spodumene was first described in 1800 for an occurrence in the type locality in Utö, Södermanland, Sweden. It was discovered by Brazilian naturalist Jose Bonifacio de Andrada e Silva. The name is derived from the Greek spodumenos (σποδούμενος), meaning "burnt to ashes", owing to the opaque ash-grey appearance of material refined for use in industry.[1] 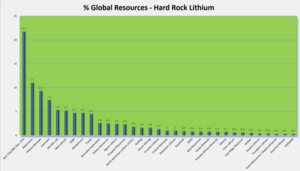 Transparent material has long been used as a gemstone with varieties kunzite and hiddenite noted for their strong pleochroism. Source localities include Democratic Republic of Congo, Afghanistan, Australia , Brazil , Madagascar (see mining), Pakistan , Québec in Canada , and North Carolina and California in the United States

Since 2018, the Democratic Republic of Congo (DRC) has been known to have the largest lithium spodumene hard rock deposit in the world, with mining operations occurring in the central DRC territory of Manono, Tanganyika Province.[8] The total resource of the deposit located in Manono has the potential to be in the magnitude of 1.5 billion tons of high-grade low-impurities lithium spodumene hard-rock. The two largest pegmatites (known as the Carriere de l'Este Pegmatite and the Roche Dure Pegmatite) are each of similar size or larger than the famous Greenbushes Pegmatite in Western Australia. By 2023, theDemocratic Republic of Congo is expected to be a significant supplier of lithium to the world by means of its high-grade and low-impurity spodumene. As of 2021, the Australia n company AVZ Minerals[9] is developing the Manono Lithium and Tin project and has a resource size of 400 million tonnes of high grade low impurities at 1.65% lithium oxide (Li2O)[10] spodumene hard-rock based on studies and drilling of Roche Dure, one of several pegmatites in the deposit.

Spodumene is an important source of lithium, for use in ceramics, mobile phone and automotive batteries, medicine, Pyroceram and as a fluxing agent. As of 2019, around half of lithium is extracted from mineral ores, which mainly consist of spodumene. Lithium is extracted from spodumene by fusing in acid after roasting to convert it to the more reactive β-spodumene. The advantage of spodumene as a lithium source compared to brine sources is the higher lithium concentration, at the expense of a higher extraction cost.[11]

World production of lithium via spodumene was around 80,000 metric tonnes per annum in 2018, primarily from the Greenbushes pegmatite of Western Australia and from some China and Chile an sources. The Talison mine in Greenbushes, Western Australia, is reported to be the 2nd largest and to have the highest grade of ore at 2.4% Li2O (2012 figures).[15]

In 2020, Australia expanded spodumene mining to become the leading lithium producing country in the world.[16]

Extraction of lithium from spodumene is challenging due to the tight binding of lithium in the crystal structure. Processing methods rely on roasting at high temperature with various reagents. At temperatures in excess of 800 °C (1,470 °F), the spodumene is converted from the alpha structure to a more open beta structure from which the lithium is more easily extracted by the reagents. Suitable extraction reagents include alkali metal sulfates, such as sodium sulfate; sodium carbonate; chlorine; or hydrofluoric acid.[17]

An important economic concentrate of spodumene, known as spodumene concentrate 6 or SC6, is a high-purity lithium ore with approximately 6 percent lithium content being produced as a raw material for the subsequent production of lithium-ion batteries for electric vehicles.[18][19]

Kunzite is a purple-colored gemstone, a variety of spodumene, with the color coming from minor to trace amounts of manganese. Some (but not all) kunzite used for gemstones has been heated to enhance its color. It is also frequently irradiated to enhance the color. Exposure to sunlight will fade its color.[21]

Kunzite was discovered in 1902, and was named after George Frederick Kunz, Tiffany & Co's chief jeweler at the time, and a noted mineralogist.[21] It has been found in Brazil , the U.S., Canada , CIS, Mexico, Sweden, Western Australia, Afghanistan and Pakistan .[21]

Triphane is the name used for yellowish varieties of spodumene.[22]