A sound wave in a transmission medium causes a deviation (sound pressure, a dynamic pressure) in the local ambient pressure, a static pressure.

In a sound wave, the complementary variable to sound pressure is the particle velocity. Together, they determine the sound intensity of the wave.

Sound intensity, denoted I and measured in W·m−2 in SI units, is defined by [math]\displaystyle{ \mathbf I = p \mathbf v, }[/math] where

When measuring the sound pressure created by a sound source, it is important to measure the distance from the object as well, since the sound pressure of a spherical sound wave decreases as 1/r from the centre of the sphere (and not as 1/r2, like the sound intensity):[3] [math]\displaystyle{ p(r) \propto \frac{1}{r}. }[/math]

This relationship is an inverse-proportional law.

The sound pressure may vary in direction from the centre of the sphere as well, so measurements at different angles may be necessary, depending on the situation. An obvious example of a sound source whose spherical sound wave varies in level in different directions is a bullhorn.

The commonly used reference sound pressure in air is[6]

which is often considered as the threshold of human hearing (roughly the sound of a mosquito flying 3 m away). The proper notations for sound pressure level using this reference are Lp/(20 μPa) or Lp (re 20 μPa), but the suffix notations dB SPL, dB(SPL), dBSPL, or dBSPL are very common, even if they are not accepted by the SI.[7]

Most sound-level measurements will be made relative to this reference, meaning 1 Pa will equal an SPL of 94 dB. In other media, such as underwater, a reference level of 1 μPa is used.[8] These references are defined in ANSI S1.1-2013.[9]

The main instrument for measuring sound levels in the environment is the sound level meter. Most sound level meters provide readings in A, C, and Z-weighted decibels and must meet international standards such as IEC 61672-2013.

The lower limit of audibility is defined as SPL of 0 dB, but the upper limit is not as clearly defined. While 1 atm (194 dB peak or 191 dB SPL)[10][11] is the largest pressure variation an undistorted sound wave can have in Earth's atmosphere (i.e. if the thermodynamic properties of the air are disregarded, in reality the sound waves become progressively non-linear starting over 150 dB), larger sound waves can be present in other atmospheres or other media, such as underwater or through the Earth.[12] 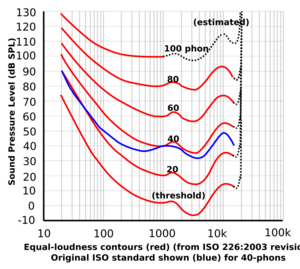 Ears detect changes in sound pressure. Human hearing does not have a flat spectral sensitivity (frequency response) relative to frequency versus amplitude. Humans do not perceive low- and high-frequency sounds as well as they perceive sounds between 3,000 and 4,000 Hz, as shown in the equal-loudness contour. Because the frequency response of human hearing changes with amplitude, three weightings have been established for measuring sound pressure: A, B and C.

The distance of the measuring microphone from a sound source is often omitted when SPL measurements are quoted, making the data useless, due to the inherent effect of the inverse proportional law. In the case of ambient environmental measurements of "background" noise, distance need not be quoted, as no single source is present, but when measuring the noise level of a specific piece of equipment, the distance should always be stated. A distance of one metre (1 m) from the source is a frequently used standard distance. Because of the effects of reflected noise within a closed room, the use of an anechoic chamber allows sound to be comparable to measurements made in a free field environment.[12]