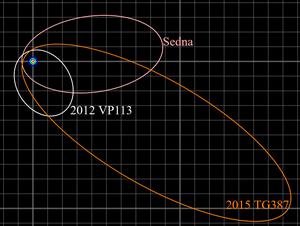 The orbits of the three known sednoids with Neptune's 30 AU circular orbit in blue. 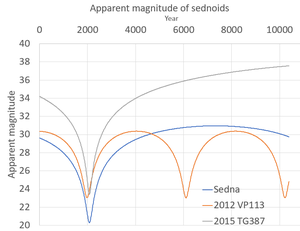 The apparent magnitudes of the three known sednoids.

Discovery image of Sedna, the eponymous and first known sednoid

A sednoid is a trans-Neptunian object with a perihelion well beyond the Kuiper cliff at 47.8 astronomical unit|AU. Only three objects are known from this population: 90377 Sedna, 2012 VP113, and 541132 Leleākūhonua (2015 TG387), but it is suspected that there are many more. All three have perihelia greater than 64 AU.[1] These objects lie outside an apparently nearly empty gap in the Solar System and have no significant interaction with the planets. They are usually grouped with the detached objects. Some astronomers, such as Scott Sheppard,[2] consider the sednoids to be inner Oort cloud objects (OCOs), though the inner Oort cloud, or Hills cloud, was originally predicted to lie beyond 2,000 AU, beyond the aphelia of the three known sednoids.

The sednoids' orbits cannot be explained by perturbations from the giant planets,[7] nor by interaction with the galactic tides.[3] If they formed in their current locations, their orbits must originally have been circular; otherwise accretion (the coalescence of smaller bodies into larger ones) would not have been possible because the large relative velocities between planetesimals would have been too disruptive.[8] Their present elliptical orbits can be explained by several hypotheses:

The three published sednoids, like all of the more extreme detached objects (objects with semi-major axes > 150 AU and perihelia > 30 AU; the orbit of Neptune), have a similar orientation (argument of perihelion) of ≈ 0° (338°±38°). This is not due to an observational bias and is unexpected, because interaction with the giant planets should have randomized their arguments of perihelion (ω),[3] with precession periods between 40 Myr and 650 Myr and 1.5 Gyr for Sedna.[13] This suggests that one[3] or more[17] undiscovered massive perturbers may exist in the outer Solar System. A super-Earth at 250 AU would cause these objects to librate around ω = 0°±60° for billions of years. There are multiple possible configurations and a low-albedo super-Earth at that distance would have an apparent magnitude below the current all-sky-survey detection limits. This hypothetical super-Earth has been dubbed Planet Nine. Larger, more-distant perturbers would also be too faint to be detected.[3]

In late 2015, V774104 was announced at the Division for Planetary Science conference as a further candidate sednoid, but its observation arc was too short to know whether its perihelion was even outside Neptune's influence.[19] The talk about V774104 was probably meant to refer to Leleākūhonua (2015 TG387) even though V774104 is the internal designation for non-sednoid 2015 TH367.

Sednoids might constitute a proper dynamical class, but they may have a heterogeneous origin; the spectral slope of 2012 VP113 is very different from that of 90377 Sedna.[20]

Each of the proposed mechanisms for Sedna's extreme orbit would leave a distinct mark on the structure and dynamics of any wider population. If a trans-Neptunian planet were responsible, all such objects would share roughly the same perihelion (≈80 AU). If Sedna had been captured from another planetary system that rotated in the same direction as the Solar System, then all of its population would have orbits on relatively low inclinations and have semi-major axes ranging from 100–500 AU. If it rotated in the opposite direction, then two populations would form, one with low and one with high inclinations. The perturbations from passing stars would produce a wide variety of perihelia and inclinations, each dependent on the number and angle of such encounters.[21]

Acquiring a larger sample of such objects would therefore help in determining which scenario is most likely.[22] "I call Sedna a fossil record of the earliest Solar System", said Brown in 2006. "Eventually, when other fossil records are found, Sedna will help tell us how the Sun formed and the number of stars that were close to the Sun when it formed."[23] A 2007–2008 survey by Brown, Rabinowitz and Schwamb attempted to locate another member of Sedna's hypothetical population. Although the survey was sensitive to movement out to 1,000 AU and discovered the likely dwarf planet Gonggong, it detected no new sednoids.[22] Subsequent simulations incorporating the new data suggested about 40 Sedna-sized objects probably exist in this region, with the brightest being about Eris's magnitude (−1.0).[22]

Following the discovery of Leleākūhonua, Sheppard et al. concluded that it implies a population of about 2 million Inner Oort Cloud objects larger than 40 km, with a total mass in the range of 1×1022 kg, about the mass of Pluto and several times the mass of the asteroid belt.[24]