Cycads in South Africa
For the insect, see Cicada.

Cycads /ˈsaɪkædz/ are seed plants with a very long fossil history that were formerly more abundant and more diverse than they are today. They typically have a stout and woody (ligneous) trunk with a crown of large, hard and stiff, evergreen leaves. They usually have pinnate leaves. The species are dioecious, therefore the individual plants of a species are either male or female. Cycads vary in size from having trunks only a few centimeters to several meters tall. They typically grow very slowly[3] and live very long, with some specimens known to be as much as 1,000 years old. Because of their superficial resemblance, they are sometimes mistaken for palms or ferns, but they are not closely related to either group.

Cycads are gymnosperms (naked seeded), meaning their unfertilized seeds are open to the air to be directly fertilized by pollination, as contrasted with angiosperms, which have enclosed seeds with more complex fertilization arrangements. Cycads have very specialized pollinators, usually a specific species of beetle. They have been reported to fix nitrogen in association with various cyanobacteria living in the roots (the "coralloid" roots).[4] These photosynthetic bacteria produce a neurotoxin called BMAA that is found in the seeds of cycads. This neurotoxin may enter a human food chain as the cycad seeds may be eaten directly as a source of flour by humans or by wild or feral animals such as bats, and humans may eat these animals. It is hypothesized that this is a source of some neurological diseases in humans.[5][6]

Cycads all over the world are in decline, with four species on the brink of extinction and seven species having fewer than 100 plants left in the wild.[7] 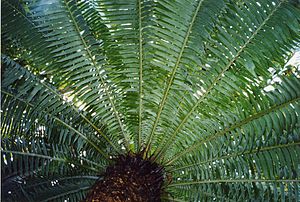 Cycads have a rosette of pinnate leaves around cylindrical trunk

Cycads have a cylindrical trunk which usually does not branch. Leaves grow directly from the trunk, and typically fall when older, leaving a crown of leaves at the top. The leaves grow in a rosette form, with new foliage emerging from the top and center of the crown. The trunk may be buried, so the leaves appear to be emerging from the ground, so the plant appears to be a basal rosette. The leaves are generally large in proportion to the trunk size, and sometimes even larger than the trunk.

The leaves are pinnate (in the form of bird feathers, pinnae), with a central leaf stalk from which parallel "ribs" emerge from each side of the stalk, perpendicular to it. The leaves are typically either compound (the leaf stalk has leaflets emerging from it as "ribs"), or have edges (margins) so deeply cut (incised) so as to appear compound. Some species have leaves that are bipinnate, which means the leaflets each have their own subleaflets, growing in the same form on the leaflet as the leaflets grow on the stalk of the leaf (self-similar geometry).

Due to superficial similarities in foliage and plant structure between cycads and palms they are often confused with each other. They also can occur in similar climates. In reality, they belong to completely different phyla, and are not closely related at all. The similar structure is evidence of convergent evolution.

Beyond those superficial resemblances, there are a number of differences between cycads and palms. For one, both male and female cycads bear cones (strobili), while palms are angiosperms and so flower and bear fruit. The mature foliage looks very similar between both groups, but the young emerging leaves of a cycad resemble a fiddlehead fern before they unfold and take their place in the rosette, while the leaves of palms are never coiled up and instead are just small versions of the mature frond. Another difference is in the stem. Both plants leave some scars on the stem below the rosette where there used to be leaves, but the scars of a cycad are helically arranged and small, while the scars of palms are a circle that wraps around the whole stem. The stems of cycads are also in general rougher and shorter than those of palms.[8] 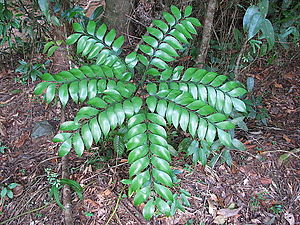 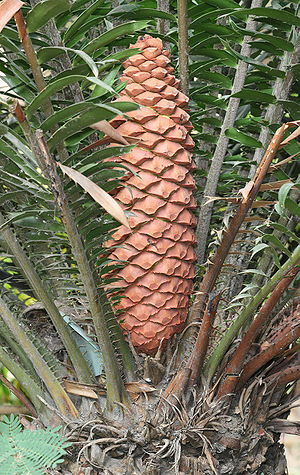 The three extant families of cycads all belong to the order Cycadales, and are Cycadaceae, Stangeriaceae, and Zamiaceae. These cycads have changed little since the Jurassic, compared to some major evolutionary changes in other plant divisions. Five additional families belonging to the Medullosales became extinct by the end of the Paleozoic Era.

Based on genetic studies, cycads are thought to be more closely related to Ginkgo than other living gymnosperms.[9]

Classification of the Cycadophyta to the rank of family.

Relationships between the extant genera, according to Nagalingum et al. (2011):[10]

The probable former range of cycads can be inferred from their global distribution. For example, the family Stangeriaceae only contains three extant species in Africa and Australia. Diverse fossils of this family have been dated to 135 mya, indicating that diversity may have been much greater before the Jurassic and late Triassic mass extinction events. However, the cycad fossil record is generally poor and little can be deduced about the effects of each mass extinction event on their diversity.

Instead, correlations can be made between the number of extant gymnosperms and angiosperms. It is likely that cycad diversity was affected more by the great angiosperm radiation in the mid-Cretaceous than by extinctions. Very slow cambial growth was first used to define cycads, and because of this characteristic the group could not compete with the rapidly growing, relatively short-lived angiosperms, which now number over 250,000 species, compared to the 1080 remaining gymnosperms.[11]

The cycad fossil record dates to the early Permian, 280 million years ago (mya). (citation?) There is controversy over older cycad fossils that date to the late Carboniferous period, 300–325  mya. This clade probably diversified extensively within its first few million years, although the extent to which it radiated is unknown because relatively few fossil specimens have been found. The regions to which cycads are restricted probably indicate their former distribution in the Pangea supercontinent before the supercontinents Laurasia and Gondwana separated.[12] Recent studies have indicated the common perception of existing cycad species as living fossils is largely misplaced, with only Bowenia dating to the Cretaceous or earlier. Although the cycad lineage itself is ancient, most extant species have evolved in the last 12 million years.[10] Though the Mesozoic is sometimes called the "Age of Cycads", the foliage of cycads is very similar to other groups of extinct seed plants, such as Bennettitales and Nilssoniales, that are not closely related, and cycads were probably only a minor component of mid-Mesozoic floras.[13] 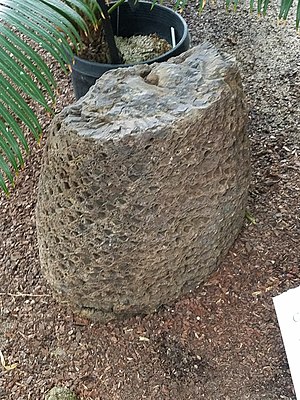 The family Stangeriaceae (named for Dr. William Stanger, 1811–1854), consisting of only three extant species, is thought to be of Gondwanan origin, as fossils have been found in Lower Cretaceous deposits in Argentina , dating to 70–135 mya. The family Zamiaceae is more diverse, with a fossil record extending from the middle Triassic to the Eocene (54–200 mya) in North and South America, Europe, Australia, and Antarctica, implying the family was present before the break-up of Pangea. The family Cycadaceae is thought to be an early offshoot from other cycads, with fossils from Eocene deposits (38–54 mya) in Japan , China , and North America,[14] indicating this family originated in Laurasia. Cycas is the only genus in the family and contains 99 species, the most of any cycad genus. Molecular data have recently shown Cycas species in Australasia and the east coast of Africa are recent arrivals, suggesting adaptive radiation may have occurred. The current distribution of cycads may be due to radiations from a few ancestral types sequestered on Laurasia and Gondwana, or could be explained by genetic drift following the separation of already evolved genera. Both explanations account for the strict endemism across present continental lines.

The living cycads are found across much of the subtropical and tropical parts of the world. The greatest diversity occurs in South and Central America.(citation?) They are also found in Mexico, the Antilles, southeastern United States of America , Australia , Melanesia, Micronesia, Japan , China , Southeast Asia, India , Sri Lanka, Madagascar , and southern and tropical Africa, where at least 65 species occur. Some can survive in harsh desert or semi-desert climates (xerophytic),[15] others in wet rain forest conditions,[16] and some in both.[17] Some can grow in sand or even on rock, some in oxygen-poor, swampy, bog-like soils rich in organic material.(citation?) Some are able to grow in full sun, some in full shade, and some in both.(citation?) Some are salt tolerant (halophytes).(citation?)

Species diversity of the extant cycads peaks at 17˚ 15"N and 28˚ 12"S, with a minor peak at the equator. There is therefore not a latitudinal diversity gradient towards the equator but towards the Tropic of Cancer and the Tropic of Capricorn. However, the peak near the northern tropic is largely due to Cycas in Asia and Zamia in the New World, whereas the peak near the southern tropic is due to Cycas again, and also to the diverse genus Encephalartos in southern and central Africa, and Macrozamia in Australia. Thus, the distribution pattern of cycad species with latitude appears to be an artifact of the geographical isolation of the remaining cycad genera and their species, and perhaps because they are partly xerophytic rather than simply tropical. Notes: The distribution area on the map should be expanded to include the range of Macrozamia macdonnelliana in the central region of Australia, Zamia boliviana in Bolivia and Mato Grosso, Brazil, Cycas thouarsii on Comoros and Seychelles, and Cycas micronesica on the islands of Guam, Palau, Rota, & Yap. Also, the depiction of cycad distribution in Africa, particularly the western boundary, should be improved to show the actual range limits, rather than national borders.

In Vanuatu, the cycad is known as namele and is an important symbol of traditional culture. It serves as a powerful taboo sign,[18] and a pair of namele leaves appears on the national flag and coat of arms. Together with the nanggaria plant, another symbol of Vanuatu culture, the namele also gives its name to Nagriamel, an indigenous political movement.