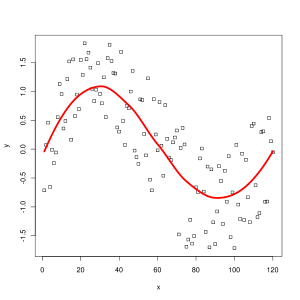 LOESS curve fitted to a population sampled from a sine wave with uniform noise added. The LOESS curve approximates the original sine wave.

LOESS and LOWESS thus build on "classical" methods, such as linear and nonlinear least squares regression. They address situations in which the classical procedures do not perform well or cannot be effectively applied without undue labor. LOESS combines much of the simplicity of linear least squares regression with the flexibility of nonlinear regression. It does this by fitting simple models to localized subsets of the data to build up a function that describes the deterministic part of the variation in the data, point by point. In fact, one of the chief attractions of this method is that the data analyst is not required to specify a global function of any form to fit a model to the data, only to fit segments of the data.

The trade-off for these features is increased computation. Because it is so computationally intensive, LOESS would have been practically impossible to use in the era when least squares regression was being developed. Most other modern methods for process modeling are similar to LOESS in this respect. These methods have been consciously designed to use our current computational ability to the fullest possible advantage to achieve goals not easily achieved by traditional approaches.

In 1964, Savitsky and Golay proposed a method equivalent to LOESS, which is commonly referred to as Savitzky–Golay filter. William S. Cleveland rediscovered the method in 1979 and gave it a distinct name. The method was further developed by Cleveland and Susan J. Devlin (1988). LOWESS is also known as locally weighted polynomial regression.

At each point in the range of the data set a low-degree polynomial is fitted to a subset of the data, with explanatory variable values near the point whose response is being estimated. The polynomial is fitted using weighted least squares, giving more weight to points near the point whose response is being estimated and less weight to points further away. The value of the regression function for the point is then obtained by evaluating the local polynomial using the explanatory variable values for that data point. The LOESS fit is complete after regression function values have been computed for each of the [math]\displaystyle{ n }[/math] data points. Many of the details of this method, such as the degree of the polynomial model and the weights, are flexible. The range of choices for each part of the method and typical defaults are briefly discussed next.

The subsets of data used for each weighted least squares fit in LOESS are determined by a nearest neighbors algorithm. A user-specified input to the procedure called the "bandwidth" or "smoothing parameter" determines how much of the data is used to fit each local polynomial. The smoothing parameter, [math]\displaystyle{ \alpha }[/math], is the fraction of the total number n of data points that are used in each local fit. The subset of data used in each weighted least squares fit thus comprises the [math]\displaystyle{ n\alpha }[/math] points (rounded to the next largest integer) whose explanatory variables' values are closest to the point at which the response is being estimated.[7]

The local polynomials fit to each subset of the data are almost always of first or second degree; that is, either locally linear (in the straight line sense) or locally quadratic. Using a zero degree polynomial turns LOESS into a weighted moving average. Higher-degree polynomials would work in theory, but yield models that are not really in the spirit of LOESS. LOESS is based on the ideas that any function can be well approximated in a small neighborhood by a low-order polynomial and that simple models can be fit to data easily. High-degree polynomials would tend to overfit the data in each subset and are numerically unstable, making accurate computations difficult.

where d is the distance of a given data point from the point on the curve being fitted, scaled to lie in the range from 0 to 1.[7]

However, any other weight function that satisfies the properties listed in Cleveland (1979) could also be used. The weight for a specific point in any localized subset of data is obtained by evaluating the weight function at the distance between that point and the point of estimation, after scaling the distance so that the maximum absolute distance over all of the points in the subset of data is exactly one.

A typical choice for [math]\displaystyle{ w(x,z) }[/math] is the Gaussian weight

As discussed above, the biggest advantage LOESS has over many other methods is the process of fitting a model to the sample data does not begin with the specification of a function. Instead the analyst only has to provide a smoothing parameter value and the degree of the local polynomial. In addition, LOESS is very flexible, making it ideal for modeling complex processes for which no theoretical models exist. These two advantages, combined with the simplicity of the method, make LOESS one of the most attractive of the modern regression methods for applications that fit the general framework of least squares regression but which have a complex deterministic structure.

Although it is less obvious than for some of the other methods related to linear least squares regression, LOESS also accrues most of the benefits typically shared by those procedures. The most important of those is the theory for computing uncertainties for prediction and calibration. Many other tests and procedures used for validation of least squares models can also be extended to LOESS models .

Another disadvantage of LOESS is the fact that it does not produce a regression function that is easily represented by a mathematical formula. This can make it difficult to transfer the results of an analysis to other people. In order to transfer the regression function to another person, they would need the data set and software for LOESS calculations. In nonlinear regression, on the other hand, it is only necessary to write down a functional form in order to provide estimates of the unknown parameters and the estimated uncertainty. Depending on the application, this could be either a major or a minor drawback to using LOESS. In particular, the simple form of LOESS can not be used for mechanistic modelling where fitted parameters specify particular physical properties of a system.

Finally, as discussed above, LOESS is a computationally intensive method (with the exception of evenly spaced data, where the regression can then be phrased as a non-causal finite impulse response filter). LOESS is also prone to the effects of outliers in the data set, like other least squares methods. There is an iterative, robust version of LOESS [Cleveland (1979)] that can be used to reduce LOESS' sensitivity to outliers, but too many extreme outliers can still overcome even the robust method.