An exotic atom is an otherwise normal atom in which one or more sub-atomic particles have been replaced by other particles of the same charge. For example, electrons may be replaced by other negatively charged particles such as muons (muonic atoms) or pions (pionic atoms).[1][2] Because these substitute particles are usually unstable, exotic atoms typically have very short lifetimes and no exotic atom observed so far can persist under normal conditions. 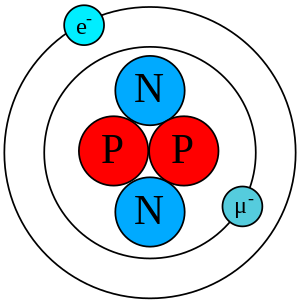 In a muonic atom (previously called a mu-mesic atom, now known to be a misnomer as muons are not mesons),[3] an electron is replaced by a muon, which, like the electron, is a lepton. Since leptons are only sensitive to weak, electromagnetic and gravitational forces, muonic atoms are governed to very high precision by the electromagnetic interaction.

Muon-catalyzed fusion is a technical application of muonic atoms.

The symbol 4.1H (Hydrogen-4.1) has been used to describe the exotic atom muonic helium (4He-μ), which is like helium-4 in having 2 protons and 2 neutrons.[4] However one of its electrons is replaced by a muon, which also has charge –1. Because the muon's orbital radius is less than 1/200th the electron's orbital radius (due to the mass ratio), the muon can be considered as a part of the nucleus. The atom then has a nucleus with 2 protons, 2 neutrons and 1 muon, with total nuclear charge +1 (from 2 protons and 1 muon) and only one electron outside, so that it is effectively an isotope of hydrogen instead of an isotope of helium. A muon's weight is approximately 0.1 amu so the isotopic mass is 4.1. Since there is only one electron outside the nucleus, the hydrogen-4.1 atom can react with other atoms. Its chemical behavior is that of a hydrogen atom and not a noble helium atom.[5] The only radioactive part of the atom is the muon. Therefore, the atom decays with the muon's half-life, 1.52 microseconds (1.52×10−6 seconds).

A hadronic atom is an atom in which one or more of the orbital electrons are replaced by a negatively charged hadron.[6] Possible hadrons include mesons such as the pion or kaon, yielding a pionic atom[7] or a kaonic atom (see Kaonic hydrogen), collectively called mesonic atoms; antiprotons, yielding an antiprotonic atom; and the Sigma- particle, yielding a Σ− or sigmaonic atom.[8][9][10]

Unlike leptons, hadrons can interact via the strong force, so the orbitals of hadronic atoms are influenced by nuclear forces between the nucleus and the hadron. Since the strong force is a short-range interaction, these effects are strongest if the atomic orbital involved is close to the nucleus, when the energy levels involved may broaden or disappear because of the absorption of the hadron by the nucleus.[2][9] Hadronic atoms, such as pionic hydrogen and kaonic hydrogen, thus provide experimental probes of the theory of strong interactions, quantum chromodynamics.[11]

An onium (plural: onia) is the bound state of a particle and its antiparticle. The classic onium is positronium, which consists of an electron and a positron bound together as a metastable state, with a relatively long lifetime of 142 ns in the triplet state.[12] Positronium has been studied since the 1950s to understand bound states in quantum field theory. A recent development called non-relativistic quantum electrodynamics (NRQED) used this system as a proving ground.

The true analogs of positronium in the theory of strong interactions, however, are not exotic atoms but certain mesons, the quarkonium states, which are made of a heavy quark such as the charm or bottom quark and its antiquark. (Top quarks are so heavy that they decay through the weak force before they can form bound states.) Exploration of these states through non-relativistic quantum chromodynamics (NRQCD) and lattice QCD are increasingly important tests of quantum chromodynamics.

Muonium, despite its name, is not an onium containing a muon and an antimuon, because IUPAC assigned that name to the system of an antimuon bound with an electron. However, the production of a muon–antimuon bound state, which is an onium (called true muonium), has been theorized.[13]

Atoms may be composed of electrons orbiting a hypernucleus that includes strange particles called hyperons. Such hypernuclear atoms are generally studied for their nuclear behaviour, falling into the realm of nuclear physics rather than atomic physics.

In condensed matter systems, specifically in some semiconductors, there are states called excitons, which are bound states of an electron and an electron hole.

An exotic molecule contains one or more exotic atoms.

"Exotic molecule" can also refer to a molecule having some other uncommon property such as a pyramidal hexamethylbenzene#Dication and a Rydberg atom.