Short description: Bound state of an electron and positron 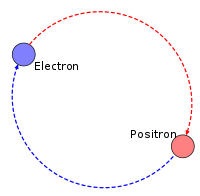 An electron and positron orbiting around their common centre of mass. An s state has zero angular momentum, so orbiting around each other would mean going straight at each other until the pair of particles is either scattered or annihilated, whichever occurs first. This is a bound quantum state known as positronium.

Positronium (Ps) is a system consisting of an electron and its anti-particle, a positron, bound together into an exotic atom, specifically an onium. The system is unstable: the two particles annihilate each other to predominantly produce two or three gamma-rays, depending on the relative spin states. The energy levels of the two particles are similar to that of the hydrogen atom (which is a bound state of a proton and an electron). However, because of the reduced mass, the frequencies of the spectral lines are less than half of those for the corresponding hydrogen lines.

However more accurate calculations with corrections to O(α2) yield a value of 7.040 μs−1 for the decay rate, corresponding to a lifetime of 142 ns.[4][5]

Positronium in the 2S state is metastable having a lifetime of 1100 ns against annihilation.[6] The positronium created in such an excited state will quickly cascade down to the ground state, where annihilation will occur more quickly.

Annihilation can proceed via a number of channels, each producing gamma rays with total energy of 1022 keV (sum of the electron and positron mass-energy), usually 2 or 3, with up to 5 gamma ray photons recorded from a single annihilation.

The annihilation into a neutrino–antineutrino pair is also possible, but the probability is predicted to be negligible. The branching ratio for o-Ps decay for this channel is 6.2×10−18 (electron neutrino–antineutrino pair) and 9.5×10−21 (for other flavour)[3] in predictions based on the Standard Model, but it can be increased by non-standard neutrino properties, like relatively high magnetic moment. The experimental upper limits on branching ratio for this decay (as well as for a decay into any "invisible" particles) are <4.3×10−7 for p-Ps and <4.2×10−7 for o-Ps.[2]

Thus, for positronium, its reduced mass only differs from the electron by a factor of 2. This causes the energy levels to also roughly be half of what they are for the hydrogen atom.

The lowest energy level of positronium (n = 1) is −6.8 eV. The next level is −1.7 eV. The negative sign is a convention that implies a bound state. Positronium can also be considered by a particular form of the two-body Dirac equation; Two particles with a Coulomb interaction can be exactly separated in the (relativistic) center-of-momentum frame and the resulting ground-state energy has been obtained very accurately using finite element methods of Janine Shertzer[9] and confirmed more recently.[10] The Dirac equation whose Hamiltonian comprises two Dirac particles and a static Coulomb potential is not relativistically invariant. But if one adds the 1/c2n (or α2n, where α is the fine-structure constant) terms, where n = 1,2..., then the result is relativistically invariant. Only the leading term is included. The α2 contribution is the Breit term; workers rarely go to α4 because at α3 one has the Lamb shift, which requires quantum electrodynamics.[9]

Formation and decay in materials

After a radioactive atom in a material undergoes a β+ decay (positron emission), the resulting high-energy positron slows down by colliding with atoms, and eventually annihilates with one of the many electrons in the material. It may however first form positronium before the annihilation event. The understanding of this process is of some importance in positron emission tomography. Approximately:[11][12]

The Positronium Beam at University College London, a lab used to study the properties of positronium.[13]

Stjepan Mohorovičić predicted the existence of positronium in a 1934 article published in Astronomische Nachrichten, in which he called it the "electrum".[14] Other sources incorrectly credit Carl Anderson as having predicted its existence in 1932 while at Caltech.[15] It was experimentally discovered by Martin Deutsch at MIT in 1951 and became known as positronium.[15] Many subsequent experiments have precisely measured its properties and verified predictions of quantum electrodynamics. There was a discrepancy known as the ortho-positronium lifetime puzzle that persisted for some time, but was eventually resolved with further calculations and measurements.[16] Measurements were in error because of the lifetime measurement of unthermalised positronium, which was only produced at a small rate. This had yielded lifetimes that were too long. Also calculations using relativistic quantum electrodynamics are difficult to perform, so they had been done to only the first order. Corrections that involved higher orders were then calculated in a non-relativistic quantum electrodynamics.[4]

Molecular bonding was predicted for positronium.[17] Molecules of positronium hydride (PsH) can be made.[18] Positronium can also form a cyanide and can form bonds with halogens or lithium.[19]

The first observation of di-positronium (Ps
2) molecules—molecules consisting of two positronium atoms—was reported on 12 September 2007 by David Cassidy and Allen Mills from University of California, Riverside.[20][21]

The events in the early universe leading to baryon asymmetry predate the formation of atoms (including exotic varieties such as positronium) by around a third of a million years, so no positronium atoms occurred then.

Likewise, the naturally occurring positrons in the present day result from high-energy interactions such as in cosmic ray–atmosphere interactions, and so are too hot (thermally energetic) to form electrical bonds before annihilation.

Positronium in very weakly bound (extremely large n) states has been predicted to be the dominant form of atomic matter in the universe in the far future if proton decay occurs.[22][23] Although any positrons and electrons left over from the decay of matter would be initially moving far too fast to bind together, the expansion of the universe slows free particles, so much so that eventually (in 1085 years, when electrons and positrons are typically 1 quintillion parsecs apart) their kinetic energy will actually fall below the Coulomb attraction potential, and thus they will be weakly bound (positronium). The resulting weakly bound electron and positron spiral inwards and eventually annihilate, with an estimated lifetime of 10141 years.[23]