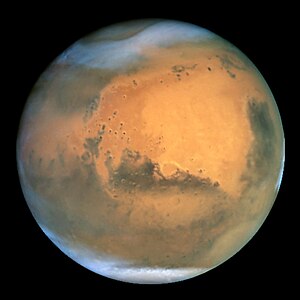 A flag design showing Mars, as a way station between Earth and the stars.

Thomas O. Paine, who served as the third Administrator of NASA, designed a Mars flag in 1984.[1] Paine's Mars flag includes a sliver of Earth near the hoist side of the flag "as a reminder of where we came from, and a star near to the other side, to remind us of where we are going. In the center of the field is a representation of Mars itself, with an arrow pointing out to the star, acknowledging that Mars is not our destination, merely a way station on a journey that has no ending".[2]

Paine's flag design was illustrated by artist Carter Emmart. That illustration was published on the cover of a periodical titled The Planetary Report. According to Emmart, Paine "created the Mars flag as an award to the person or organization that he felt had contributed most to advancing the human exploration of Mars".[3]

On November 12, 2005, Ray Bradbury received a Mars flag as a part of the "Thomas O. Paine Award for the Advancement of Human Exploration of Mars". The award was presented to Bradbury during The Planetary Society's 25th Anniversary Awards Dinner.[4]

Pascal Lee, a former NASA research engineer designed a tricolor flag for Mars in 1999. It was flown into space on STS-103 by astronaut John M. Grunsfeld. The sequence of colors, from red, to green, and finally blue, represent the transformation of Mars from a lifeless planet to one teeming with life, as inspired by Kim Stanley Robinson's Mars trilogy of novels. It is also flown at the Flashline Mars Arctic Research Station, on behalf of the Mars Society.[5]

The Flag of the Martian Congressional Republic as depicted in The Expanse television series.

In The Expanse television series, based on The Expanse series of novels by James S. A. Corey, the Martian Congressional Republic is the governing body that rules over the inhabitants of Mars and is one of the two human superpowers in the series. Its flag is reminiscent of Mars and its two moons, Phobos and Deimos, with the blue crescent symbolizing the terraforming effort.

Flag of the Federal Republic of Mars, as described in Moving Mars

In his 1994 science-fiction novel Moving Mars, Greg Bear describes the flag of the fictional Federal Republic of Mars as follows: "red Mars and two moons in blue field above a diagonal, white below".[6]

Stranger in a Strange Land

Flag of Mars as described in Stranger in a Strange Land

In Robert A. Heinlein's 1961 science-fiction novel Stranger in a Strange Land, a flag of Mars is hastily improvised, consisting of "the field in white and the sigil of Mars in red".[7]