Astronomy:Transit of Deimos from Mars

Short description: Transit of a Moon of Mars 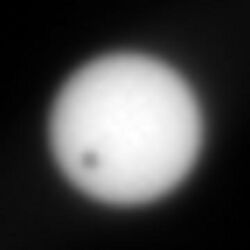 Deimos transits the Sun, as viewed by the Mars Opportunity rover (4 March 2004).

A transit of Deimos from Mars lasts a maximum of about two minutes, due to its relatively rapid orbital period of about 30.3 hours.

Because they orbit Mars in low-inclination equatorial orbits, the shadows of Phobos or Deimos projected onto the surface of Mars exhibit a seasonal variation in latitude. At any given geographical location on the surface of Mars, there are two intervals in a Martian year when the shadows of Phobos or Deimos are passing through its latitude. During each such interval, no or one transit of Deimos can be seen by observers at that geographical location (compared to about half a dozen transits of Phobos).

Because it orbits relatively close to Mars, Deimos cannot be seen north of 82.7°N or south of 82.7°S; such latitudes will obviously not see transits either.

The data in the tables below is generated using JPL Horizons. There is some discrepancy of a minute or two with the times reported for the series of images above. This may be due to imprecision in the ephemeris data used by JPL Horizons; also the JPL Horizons data gives local apparent solar time while the times reported above are probably some form of mean solar time (and therefore some of the discrepancy would be due to the Martian equivalent of the equation of time).

Note: the data below is valid for the original landing sites. To the extent that the rovers have moved around on the surface, the parameters of the transits as actually observed may be slightly different.

Near misses are in italics.

A transit lightcurve of Deimos was obtained [1] in 2020 using the solar array currents measured by the InSight lander. The light drop was about 0.9% (possibly less than the predicted geometric obstruction of 1% due to light scattering by atmospheric dust outside the shadow). The transit lasted between 116 and 124 seconds.