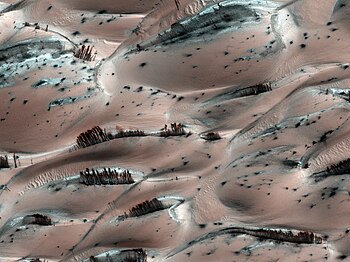 Tree-like dunes on Mars. Groups of dark brown streaks have been photographed by the Mars Reconnaissance Orbiter on melting pinkish sand dunes covered with light frost. The image was taken near the North Pole of Mars, spring 2010. Objects about 25 centimetres across are resolved on this image, which is about one kilometre wide. Close ups of some parts of this image show billowing plumes indicating that the sand slides were occurring at the time of the photo; see center left.

This is a list of dune fields not on Earth which have been given official names by the International Astronomical Union. Dune fields are named according to the IAU's rules of planetary nomenclature. The relevant descriptor term is undae. As of now, the only two Solar System planets, besides Earth, with named dune fields are Venus and Mars. Dune fields have also been discovered on Saturn's moon Titan,[1] Pluto[2][3] and comet 67P/Churyumov–Gerasimenko.[4]

There are three officially named dune fields on Venus. They are named after desert goddesses, as per the IAU's rules. They are listed below.

Dunes in Abalos Undae, Mars appear blueish due to basalt, while the reddish-white areas may be dust.

There are six officially named dune fields on Mars, which are named after nearby classical albedo features in accordance with the IAU's rules. Five of them lie between 75°N to 85°N, between Planum Boreum and Vastitas Borealis. These dune fields span over 200 degrees of longitude. The sixth, Ogygis Undae, lies on the southern hemisphere of Mars. They are listed below.

Detail of the dunes of the Hagal Dune Field

There are five officially named dune fields on Titan, which are named after Greek gods, goddesses or personifications of wind. They are listed below:[12]

Analysis of high resolution photos from New Horizons taken on 14 July 2015 of Pluto's Sputnik Planum region in 2018 has confirmed the presence of transverse dunes (perpendicular to the wind streaks) within the cellular nitrogen plains, spaced about 0.4 to 1 km apart, that are thought to be composed of 200-300 μm diameter particles of methane ice believed to be derived from the nearby Al-Idrisi Montes.[2][3] These features are yet to be formally named.

A large portion of this article was sourced from the Gazetteer of Planetary Nomenclature, the official IAU database of planetary names.