This Mars climate model is a complex 3-dimensional (height, latitude, longitude) model, which represents the processes of atmospheric heating by gases and ground-air heat transfer, as well as large-scale atmospheric motions.[1]

The current model has not been modified for use with distributed computing systems like BOINC. 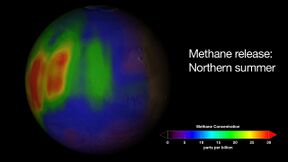 The source of Mars methane is unknown; its detection is shown here 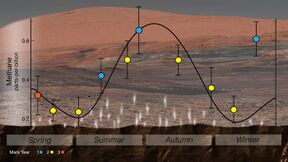 The Martian atmosphere contains 10 nmol/mol methane (CH4).[2] In 2014, NASA reported that the Curiosity rover detected a tenfold increase ('spike') in methane in the atmosphere around it in late 2013 and early 2014. Four measurements taken over two months in this period averaged 7.2 ppb, implying that Mars is episodically producing or releasing methane from an unknown source.[3] Before and after that, readings averaged around one-tenth that level.[4][5][3] On 7 June 2018, NASA announced a cyclical seasonal variation in the background level of atmospheric methane.[6][7][8]

The principal candidates for the origin of Mars' methane include non-biological processes such as water-rock reactions, radiolysis of water, and pyrite formation, all of which produce H2 that could then generate methane and other hydrocarbons via Fischer–Tropsch synthesis with CO and CO2.[9] It has also been shown that methane could be produced by a process involving water, carbon dioxide, and the mineral olivine, which is known to be common on Mars.[10]

Living microorganisms, such as methanogens, are another possible source, but no evidence for the presence of such organisms has been found on Mars.[11][12][13]

There are global climate simulation models that have been written for Jupiter, Saturn, Neptune and Venus.[14]