A period 7 element is one of the chemical elements in the seventh row (or period) of the periodic table of the chemical elements. The periodic table is laid out in rows to illustrate recurring (periodic) trends in the chemical behavior of the elements as their atomic number increases: a new row is begun when chemical behavior begins to repeat, meaning that elements with similar behavior fall into the same vertical columns. The seventh period contains 32 elements, tied for the most with period 6, beginning with francium and ending with oganesson, the heaviest element currently discovered. As a rule, period 7 elements fill their 7s shells first, then their 5f, 6d, and 7p shells in that order, but there are exceptions, such as uranium.

All elements of period 7 are radioactive. This period contains the actinides, which includes plutonium, the naturally occurring element with the heaviest nucleus; subsequent elements must be created artificially. While the first five of these synthetic elements (americium through einsteinium) are now available in macroscopic quantities, most are extremely rare, having only been prepared in microgram amounts or less. The later transactinide elements have only been identified in laboratories in batches of a few atoms at a time.

Although the rarity of many of these elements means that experimental results are not very extensive, their periodic and group trends are less well defined than other periods. Whilst francium and radium do show typical properties of their respective groups, actinides display a much greater variety of behavior and oxidation states than the lanthanides. These peculiarities are due to a variety of factors, including a large degree of spin–orbit coupling and relativistic effects, ultimately caused by the very high positive electrical charge from their massive atomic nuclei. Periodicity mostly holds throughout the 6d series, and is predicted also for moscovium and livermorium, but the other four 7p elements, nihonium, flerovium, tennessine, and oganesson, are predicted to have very different properties from those expected for their groups.

(*) Exception to the Madelung rule.

It is generally agreed by reliable sources focusing on the matter that the f-block begins at actinium.[1] However, many textbooks still give Ac and Rf–Cn as d-block elements, and the f-block as Th–Lr splitting the d-block in two. A 2021 IUPAC provisional report on the question suggested that the format shown here is better, but it has not yet become the official IUPAC table.[2]

Francium and radium make up the s-block elements of the 7th period.

Francium is a chemical element with symbol Fr and atomic number 87. It was formerly known as eka-caesium and actinium K.[note 1] It is one of the two least electronegative elements, the other being caesium. Francium is a highly radioactive metal that decays into astatine, radium, and radon. As an alkali metal, it has one valence electron. Francium was discovered by Marguerite Perey in France (from which the element takes its name) in 1939. It was the last element discovered in nature, rather than by synthesis.[note 2] Outside the laboratory, francium is extremely rare, with trace amounts found in uranium and thorium ores, where the isotope francium-223 continually forms and decays. As little as 20–30 g (one ounce) exists at any given time throughout the Earth's crust; the other isotopes are entirely synthetic. The largest amount produced in the laboratory was a cluster of more than 300,000 atoms.[3]

Radium is a chemical element with atomic number 88, represented by the symbol Ra. Radium is an almost pure-white alkaline earth metal, but it readily oxidizes, reacting with nitrogen (rather than oxygen) on exposure to air, becoming black in color. All isotopes of radium are highly radioactive, with the most stable isotope being radium-226, which has a half-life of 1601 years and decays into radon gas. Because of such instability, radium is luminescent, glowing a faint blue. Radium, in the form of radium chloride, was discovered by Marie Skłodowska-Curie and Pierre Curie in 1898. They extracted the radium compound from uraninite and published the discovery at the French Academy of Sciences five days later. Radium was isolated in its metallic state by Marie Curie and André-Louis Debierne through the electrolysis of radium chloride in 1910. Since its discovery, it has given names such as radium A and radium C2 to several isotopes of other elements that are decay products of radium-226. In nature, radium is found in uranium ores in trace amounts as small as a seventh of a gram per ton of uraninite. Radium is not necessary for living organisms, and adverse health effects are likely when it is incorporated into biochemical processes because of its radioactivity and chemical reactivity. 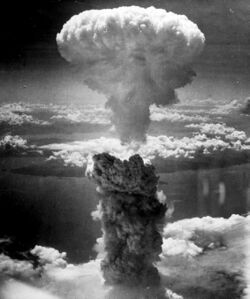 The atomic bomb dropped on Nagasaki had a plutonium charge.[4]

The actinide or actinoid (IUPAC nomenclature) series encompasses the 15 metallic chemical elements with atomic numbers from 89 to 103, actinium through lawrencium.[5][6][7][8]

Of the actinides, thorium and uranium occur naturally in substantial, primordial, quantities. The radioactive decay of uranium produces transient amounts of actinium, protactinium and plutonium, and atoms of neptunium are occasionally produced from transmutation reactions in uranium ores. The other actinides are purely synthetic elements, although the first six actinides after plutonium would have been produced during the Oklo phenomenon (and long since decayed away), and curium almost certainly previously existed in nature as an extinct radionuclide.[5][9] Nuclear weapons tests have released at least six actinides heavier than plutonium into the environment; analysis of debris from a 1952 hydrogen bomb explosion showed the presence of americium, curium, berkelium, californium, einsteinium and fermium.[10]

All actinides are radioactive and release energy upon radioactive decay; naturally occurring uranium and thorium, and synthetically produced plutonium are the most abundant actinides on Earth. These are used in nuclear reactors and nuclear weapons. Uranium and thorium also have diverse current or historical uses, and americium is used in the ionization chambers of most modern smoke detectors.

In presentations of the periodic table, the lanthanides and the actinides are customarily shown as two additional rows below the main body of the table,[5] with placeholders or else a selected single element of each series (either lanthanum or lutetium, and either actinium or lawrencium, respectively) shown in a single cell of the main table, between barium and hafnium, and radium and rutherfordium, respectively. This convention is entirely a matter of aesthetics and formatting practicality; a rarely used wide-formatted periodic table (32 columns) shows the lanthanide and actinide series in their proper columns, as parts of the table's sixth and seventh rows (periods).

Transactinide elements (also, transactinides, or super-heavy elements) are the chemical elements with atomic numbers greater than those of the actinides, the heaviest of which is lawrencium (103).[11][12] All transactinides of period 7 have been discovered, up to oganesson (element 118).

Transactinides are radioactive and have only been obtained synthetically in laboratories. None of these elements has ever been collected in a macroscopic sample. Transactinide elements are all named after nuclear physicists and chemists or important locations involved in the synthesis of the elements.

IUPAC defines an element to exist if its lifetime is longer than 10−14 seconds, the time needed for the nucleus to form an electronic cloud.[13]