In electronics, a multiplexer (or mux; spelled sometimes as multiplexor), also known as a data selector, is a device that selects between several analog or digital input signals and forwards it to a single output line.[1] A multiplexer of [math]2^n[/math] inputs has [math]n[/math] select lines, which are used to select which input line to send to the output.[2] Multiplexers are mainly used to increase the amount of data that can be sent over the network within a certain amount of time and bandwidth.[1] Multiplexers can also be used to implement Boolean functions of multiple variables.

An electronic multiplexer makes it possible for several signals to share one device or resource, for example, one analog-to-digital converter or one communications transmission medium, instead of having one device per input signal.

Conversely, a demultiplexer (or demux) is a device taking a single input and selecting signals of the output of the compatible mux, which is connected to the single input, and a shared selection line. A multiplexer is often used with a complementary demultiplexer on the receiving end.[1]

An electronic multiplexer can be considered as a multiple-input, single-output switch, and a demultiplexer as a single-input, multiple-output switch.[3] The schematic symbol for a multiplexer is an isosceles trapezoid with the longer parallel side containing the input pins and the short parallel side containing the output pin.[4] The schematic on the right shows a 2-to-1 multiplexer on the left and an equivalent switch on the right. The [math]sel[/math] wire connects the desired input to the output.

At the receiving end of the data link a complementary demultiplexer is usually required to break the single data stream back down into the original streams. In some cases, the far end system may have functionality greater than a simple demultiplexer; and while the demultiplexing still occurs technically, it may never be implemented discretely. This would be typical when: a multiplexer serves a number of IP network users; and then feeds directly into a router, which immediately reads the content of the entire link into its routing processor; and then does the demultiplexing in memory from where it will be converted directly into IP sections.

Often, a multiplexer and demultiplexer are combined together into a single piece of equipment, which is conveniently referred to as a "multiplexer". Both circuit elements are needed at both ends of a transmission link because most communications systems transmit in both directions.

In analog circuit design, a multiplexer is a special type of analog switch that connects one signal selected from several inputs to a single output. 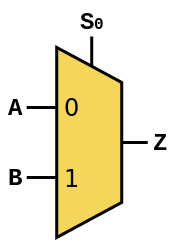 Which can be expressed as a truth table:

Or, in simpler notation:

Larger multiplexers are also common and, as stated above, require [math]\scriptstyle \left \lceil \log_2(n) \right \rceil[/math] selector pins for [math]n[/math] inputs. Other common sizes are 4-to-1, 8-to-1, and 16-to-1. Since digital logic uses binary values, powers of 2 are used (4, 8, 16) to maximally control a number of inputs for the given number of selector inputs.

The boolean equation for a 4-to-1 multiplexer is:

The following 4-to-1 multiplexer is constructed from 3-state buffers and AND gates (the AND gates are acting as the decoder): 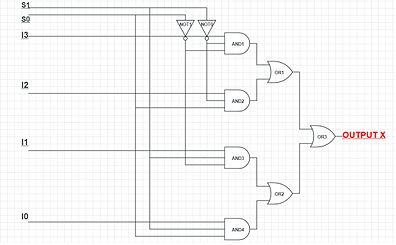 A 4:1 MUX circuit using 3 input AND and other gates 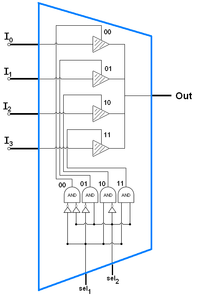 The subscripts on the [math]\scriptstyle I_n[/math] inputs indicate the decimal value of the binary control inputs at which that input is let through.

The 7400 series has several ICs that contain multiplexers:

If X is the input and S is the selector, and A and B are the outputs: 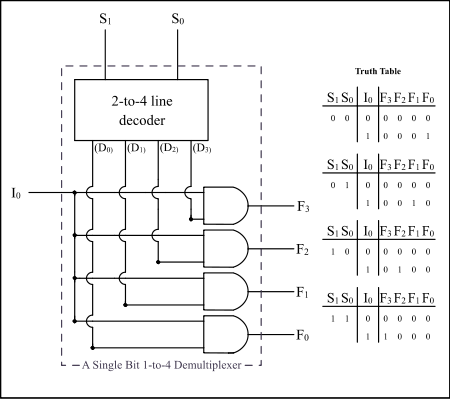 The 7400 series has several ICs that contain demultiplexers: