Each of these classic scalar RISC designs fetches and tries to execute one instruction per cycle. The main common concept of each design is a five-stage execution instruction pipeline. During operation, each pipeline stage works on one instruction at a time. Each of these stages consists of a set of flip-flops to hold state, and combinational logic that operates on the outputs of those flip-flops.

The instructions reside in memory that takes one cycle to read. This memory can be dedicated SRAM, or an Instruction Cache. The term "latency" is used in computer science often, and means the time from when an operation starts until it completes. Thus, instruction fetch has a latency of one clock cycle (if using single cycle SRAM or if the instruction was in the cache). Thus, during the Instruction Fetch stage, a 32-bit instruction is fetched from the instruction memory.

At the same time the register file is read, instruction issue logic in this stage determines if the pipeline is ready to execute the instruction in this stage. If not, the issue logic causes both the Instruction Fetch stage and the Decode stage to stall. On a stall cycle, the input flip flops do not accept new bits, thus no new calculations take place during that cycle.

If the instruction decoded is a branch or jump, the target address of the branch or jump is computed in parallel with reading the register file. The branch condition is computed in the following cycle (after the register file is read), and if the branch is taken or if the instruction is a jump, the PC in the first stage is assigned the branch target, rather than the incremented PC that has been computed. Some architectures made use of the ALU in the Execute stage, at the cost of slightly decreased instruction throughput.

The decode stage ended up with quite a lot of hardware: MIPS has the possibility of branching if two registers are equal, so a 32-bit-wide AND tree runs in series after the register file read, making a very long critical path through this stage (which means fewer cycles per second). Also, the branch target computation generally required a 16 bit add and a 14 bit incrementer. Resolving the branch in the decode stage made it possible to have just a single-cycle branch mis-predict penalty. Since branches were very often taken (and thus mis-predicted), it was very important to keep this penalty low.

The Execute stage is where the actual computation occurs. Typically this stage consists of an Arithmetic and Logic Unit, and also a bit shifter. It may also include a multiple cycle multiplier and divider.

The Arithmetic and Logic Unit is responsible for performing boolean operations (and, or, not, nand, nor, xor, xnor) and also for performing integer addition and subtraction. Besides the result, the ALU typically provides status bits such as whether or not the result was 0, or if an overflow occurred.

The bit shifter is responsible for shift and rotations.

Instructions on these simple RISC machines can be divided into three latency classes according to the type of the operation:

If data memory needs to be accessed, it is done so in this stage.

During this stage, single cycle latency instructions simply have their results forwarded to the next stage. This forwarding ensures that both one and two cycle instructions always write their results in the same stage of the pipeline so that just one write port to the register file can be used, and it is always available.

For direct mapped and virtually tagged data caching, the simplest by far of the numerous data cache organizations, two SRAMs are used, one storing data and the other storing tags.

Hennessy and Patterson coined the term hazard for situations where instructions in a pipeline would produce wrong answers.

Structural hazards occur when two instructions might attempt to use the same resources at the same time. Classic RISC pipelines avoided these hazards by replicating hardware. In particular, branch instructions could have used the ALU to compute the target address of the branch. If the ALU were used in the decode stage for that purpose, an ALU instruction followed by a branch would have seen both instructions attempt to use the ALU simultaneously. It is simple to resolve this conflict by designing a specialized branch target adder into the decode stage.

Data hazards occur when an instruction, scheduled blindly, would attempt to use data before the data is available in the register file.

In the classic RISC pipeline, Data hazards are avoided in one of two ways:

Suppose the CPU is executing the following piece of code:

The instruction fetch and decode stages send the second instruction one cycle after the first. They flow down the pipeline as shown in this diagram: 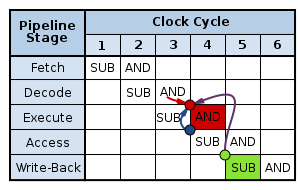 In a naive pipeline, without hazard consideration, the data hazard progresses as follows:

In cycle 3, the SUB instruction calculates the new value for r10. In the same cycle, the AND operation is decoded, and the value of r10 is fetched from the register file. However, the SUB instruction has not yet written its result to r10. Write-back of this normally occurs in cycle 5 (green box). Therefore, the value read from the register file and passed to the ALU (in the Execute stage of the AND operation, red box) is incorrect.

Instead, we must pass the data that was computed by SUB back to the Execute stage (i.e. to the red circle in the diagram) of the AND operation before it is normally written-back. The solution to this problem is a pair of bypass multiplexers. These multiplexers sit at the end of the decode stage, and their flopped outputs are the inputs to the ALU. Each multiplexer selects between:

Note that the data can only be passed forward in time - the data cannot be bypassed back to an earlier stage if it has not been processed yet. In the case above, the data is passed forward (by the time the AND is ready for the register in the ALU, the SUB has already computed it).

However, consider the following instructions:

The data read from the address adr is not present in the data cache until after the Memory Access stage of the LD instruction. By this time, the AND instruction is already through the ALU. To resolve this would require the data from memory to be passed backwards in time to the input to the ALU. This is not possible. The solution is to delay the AND instruction by one cycle. The data hazard is detected in the decode stage, and the fetch and decode stages are stalled - they are prevented from flopping their inputs and so stay in the same state for a cycle. The execute, access, and write-back stages downstream see an extra no-operation instruction (NOP) inserted between the LD and AND instructions.

This NOP is termed a pipeline bubble since it floats in the pipeline, like an air bubble, occupying resources but not producing useful results. The hardware to detect a data hazard and stall the pipeline until the hazard is cleared is called a pipeline interlock.

A pipeline interlock does not have to be used with any data forwarding, however. The first example of the SUB followed by AND and the second example of LD followed by AND can be solved by stalling the first stage by three cycles until write-back is achieved, and the data in the register file is correct, causing the correct register value to be fetched by the AND's Decode stage. This causes quite a performance hit, as the processor spends a lot of time processing nothing, but clock speeds can be increased as there is less forwarding logic to wait for.

This data hazard can be detected quite easily when the program's machine code is written by the compiler. The Stanford MIPS machine relied on the compiler to add the NOP instructions in this case, rather than having the circuitry to detect and (more taxingly) stall the first two pipeline stages. Hence the name MIPS: Microprocessor without Interlocked Pipeline Stages. It turned out that the extra NOP instructions added by the compiler expanded the program binaries enough that the instruction cache hit rate was reduced. The stall hardware, although expensive, was put back into later designs to improve instruction cache hit rate, at which point the acronym no longer made sense.

Control hazards are caused by conditional and unconditional branching. The classic RISC pipeline resolves branches in the decode stage, which means the branch resolution recurrence is two cycles long. There are three implications:

There are four schemes to solve this performance problem with branches:

Delayed branches have been criticized[by whom?] as a poor short-term choice in ISA design:

Suppose a 32-bit RISC processes an ADD instruction that adds two large numbers, and the result does not fit in 32 bits. What happens?

But the programmer, especially if programming in a language supporting large integers (e.g. Lisp or Scheme), may not want wrapping arithmetic. Some architectures (e.g. MIPS), define special addition operations that branch to special locations on overflow, rather than wrapping the result. Software at the target location is responsible for fixing the problem. This special branch is called an exception. Exceptions differ from regular branches in that the target address is not specified by the instruction itself, and the branch decision is dependent on the outcome of the instruction.

The most common kind of software-visible exception on one of the classic RISC machines is a TLB miss (see virtual memory).

Exceptions are different from branches and jumps, because those other control flow changes are resolved in the decode stage. Exceptions are resolved in the writeback stage. When an exception is detected, the following instructions (earlier in the pipeline) are marked as invalid, and as they flow to the end of the pipe their results are discarded. The program counter is set to the address of a special exception handler, and special registers are written with the exception location and cause.

To take precise exceptions, the CPU must commit changes to the software visible state in the program order. This in-order commit happens very naturally in the classic RISC pipeline. Most instructions write their results to the register file in the writeback stage, and so those writes automatically happen in program order. Store instructions, however, write their results to the Store Data Queue in the access stage. If the store instruction takes an exception, the Store Data Queue entry is invalidated so that it is not written to the cache data SRAM later.

Occasionally, either the data or instruction cache does not contain a required datum or instruction. In these cases, the CPU must suspend operation until the cache can be filled with the necessary data, and then must resume execution. The problem of filling the cache with the required data (and potentially writing back to memory the evicted cache line) is not specific to the pipeline organization, and is not discussed here.

There are two strategies to handle the suspend/resume problem. The first is a global stall signal. This signal, when activated, prevents instructions from advancing down the pipeline, generally by gating off the clock to the flip-flops at the start of each stage. The disadvantage of this strategy is that there are a large number of flip flops, so the global stall signal takes a long time to propagate. Since the machine generally has to stall in the same cycle that it identifies the condition requiring the stall, the stall signal becomes a speed-limiting critical path.