In computer architecture, a transport triggered architecture (TTA) is a kind of processor design in which programs directly control the internal transport buses of a processor. Computation happens as a side effect of data transports: writing data into a triggering port of a functional unit triggers the functional unit to start a computation. This is similar to what happens in a systolic array. Due to its modular structure, TTA is an ideal processor template for application-specific instruction-set processors (ASIP) with customized datapath but without the inflexibility and design cost of fixed function hardware accelerators.

Typically a transport triggered processor has multiple transport buses and multiple functional units connected to the buses, which provides opportunities for instruction level parallelism. The parallelism is statically defined by the programmer. In this respect (and obviously due to the large instruction word width), the TTA architecture resembles the very long instruction word (VLIW) architecture. A TTA instruction word is composed of multiple slots, one slot per bus, and each slot determines the data transport that takes place on the corresponding bus. The fine-grained control allows some optimizations that are not possible in a conventional processor. For example, software can transfer data directly between functional units without using registers.

Transport triggering exposes some microarchitectural details that are normally hidden from programmers. This greatly simplifies the control logic of a processor, because many decisions normally done at run time are fixed at compile time. However, it also means that a binary compiled for one TTA processor will not run on another one without recompilation if there is even a small difference in the architecture between the two. The binary incompatibility problem, in addition to the complexity of implementing a full context switch, makes TTAs more suitable for embedded systems than for general purpose computing.

Benefits in comparison to VLIW architectures

TTAs can be seen as "exposed datapath" VLIW architectures. While VLIW is programmed using operations, TTA splits the operation execution to multiple move operations. The low level programming model enables several benefits in comparison to the standard VLIW. For example, a TTA architecture can provide more parallelism with simpler register files than with VLIW. As the programmer is in control of the timing of the operand and result data transports, the complexity (the number of input and output ports) of the register file (RF) need not be scaled according to the worst case issue/completion scenario of the multiple parallel instructions.

An important unique software optimization enabled by the transport programming is called software bypassing. In case of software bypassing, the programmer bypasses the register file write back by moving data directly to the next functional unit's operand ports. When this optimization is applied aggressively, the original move that transports the result to the register file can be eliminated completely, thus reducing both the register file port pressure and freeing a general purpose register for other temporary variables. The reduced register pressure, in addition simplifying the required complexity of the RF hardware, can lead to significant CPU energy savings, an important benefit especially in mobile embedded systems.[1] [2]

TTA processors are built of independent function units and register files, which are connected with transport buses and sockets. 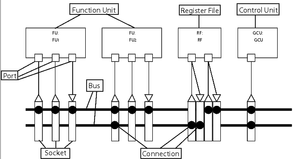 Each function unit implements one or more operations, which implement functionality ranging from a simple addition of integers to a complex and arbitrary user-defined application-specific computation. Operands for operations are transferred through function unit ports.

Each function unit may have an independent pipeline. In case a function unit is fully pipelined, a new operation that takes multiple clock cycles to finish can be started in every clock cycle. On the other hand, a pipeline can be such that it does not always accept new operation start requests while an old one is still executing.

Data memory access and communication to outside of the processor is handled by using special function units. Function units that implement memory accessing operations and connect to a memory module are often called load/store units.

Interconnect architecture consists of transport buses which are connected to function unit ports by means of sockets. Due to expense of connectivity, it is usual to reduce the number of connections between units (function units and register files). A TTA is said to be fully connected in case there is a path from each unit output port to every unit's input ports.

Sockets provide means for programming TTA processors by allowing to select which bus-to-port connections of the socket are enabled at any time instant. Thus, data transports taking place in a clock cycle can be programmed by defining the source and destination socket/port connection to be enabled for each bus.

Like all other operations on a TTA machine, these instructions are implemented as "move" instructions to a special function unit.

TTA implementations that support conditional execution, such as the sTTAck and the first MOVE prototype, can implement most of these control flow instructions as a conditional move to the program counter.[3][4]

In more traditional processor architectures, a processor is usually programmed by defining the executed operations and their operands. For example, an addition instruction in a RISC architecture could look like the following.

This example operation adds the values of general-purpose registers r1 and r2 and stores the result in register r3. Coarsely, the execution of the instruction in the processor probably results in translating the instruction to control signals which control the interconnection network connections and function units. The interconnection network is used to transfer the current values of registers r1 and r2 to the function unit that is capable of executing the add operation, often called ALU as in Arithmetic-Logic Unit. Finally, a control signal selects and triggers the addition operation in ALU, of which result is transferred back to the register r3.

An addition operation can be executed in a TTA processor as follows:

The second move, a write to the second operand of the function unit called ALU, triggers the addition operation. This makes the result of addition available in the output port 'result' after the execution latency of the 'add'.

The ports associated with the ALU may act as an accumulator, allowing creation of macro instructions that abstract away the underlying TTA:

The leading philosophy of TTAs is to move complexity from hardware to software. Due to this, several additional hazards are introduced to the programmer. One of them is delay slots, the programmer visible operation latency of the function units. Timing is completely the responsibility of the programmer. The programmer has to schedule the instructions such that the result is neither read too early nor too late. There is no hardware detection to lock up the processor in case a result is read too early. Consider, for example, an architecture that has an operation add with latency of 1, and operation mul with latency of 3. When triggering the add operation, it is possible to read the result in the next instruction (next clock cycle), but in case of mul, one has to wait for two instructions before the result can be read. The result is ready for the 3rd instruction after the triggering instruction.

Reading a result too early results in reading the result of a previously triggered operation, or in case no operation was triggered previously in the function unit, the read value is undefined. On the other hand, result must be read early enough to make sure the next operation result does not overwrite the yet unread result in the output port.

Due to the abundance of programmer-visible processor context which practically includes, in addition to register file contents, also function unit pipeline register contents and/or function unit input and output ports, context saves required for external interrupt support can become complex and expensive to implement in a TTA processor. Therefore, interrupts are usually not supported by TTA processors, but their task is delegated to an external hardware (e.g., an I/O processor) or their need is avoided by using an alternative synchronization/communication mechanism such as polling.