In computer architecture, 256-bit integers, memory addresses, or other data units are those that are 256 bits (32 octets) wide. Also, 256-bit CPU and ALU architectures are those that are based on registers, address buses, or data buses of that size. There are currently no mainstream general-purpose processors built to operate on 256-bit integers or addresses, though a number of processors do operate on 256-bit data. CPUs feature SIMD instruction sets (Advanced Vector Extensions and the FMA instruction set etc.) where 256-bit vector registers are used to store several smaller numbers, such as eight 32-bit floating-point numbers, and a single instruction can operate on all these values in parallel. However, these processors do not operate on individual numbers that are 256 binary digits in length, only their registers have the size of 256-bits. Binary digits are found together in 128-bit collections. 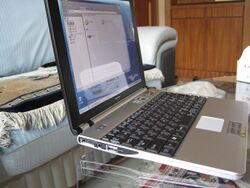