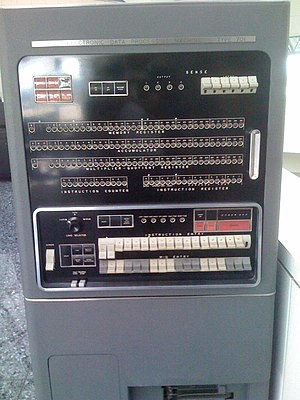 Front panel of an IBM 701 computer introduced in 1952. Lights in the middle display the contents of various registers. The instruction counter is at the lower left.

Usually, the PC is incremented after fetching an instruction, and holds the memory address of ("points to") the next instruction that would be executed.[4][nb 2]

Processors usually fetch instructions sequentially from memory, but control transfer instructions change the sequence by placing a new value in the PC. These include branches (sometimes called jumps), subroutine calls, and returns. A transfer that is conditional on the truth of some assertion lets the computer follow a different sequence under different conditions.

In a simple central processing unit (CPU), the PC is a digital counter (which is the origin of the term "program counter") that may be one of several hardware registers. The instruction cycle[6] begins with a fetch, in which the CPU places the value of the PC on the address bus to send it to the memory. The memory responds by sending the contents of that memory location on the data bus. (This is the stored-program computer model, in which a single memory space contains both executable instructions and ordinary data.[7]) Following the fetch, the CPU proceeds to execution, taking some action based on the memory contents that it obtained. At some point in this cycle, the PC will be modified so that the next instruction executed is a different one (typically, incremented so that the next instruction is the one starting at the memory address immediately following the last memory location of the current instruction).

Like other processor registers, the PC may be a bank of binary latches, each one representing one bit of the value of the PC.[8] The number of bits (the width of the PC) relates to the processor architecture. For instance, a “32-bit” CPU may use 32 bits to be able to address 232 units of memory. On some processors, the width of program counter instead depends on the addressable memory; for example, some AVR controllers have a PC which wraps around after 12 bits.[9]

If the PC is a binary counter, it may increment when a pulse is applied to its COUNT UP input, or the CPU may compute some other value and load it into the PC by a pulse to its LOAD input.[10]

To identify the current instruction, the PC may be combined with other registers that identify a segment or page. This approach permits a PC with fewer bits by assuming that most memory units of interest are within the current vicinity.

Use of a PC that normally increments assumes that what a computer does is execute a usually linear sequence of instructions. Such a PC is central to the von Neumann architecture. Thus programmers write a sequential control flow even for algorithms that do not have to be sequential. The resulting “von Neumann bottleneck” led to research into parallel computing,[11] including non-von Neumann or dataflow models that did not use a PC; for example, rather than specifying sequential steps, the high-level programmer might specify desired function and the low-level programmer might specify this using combinatory logic.

Modern high-level programming languages still follow the sequential-execution model and, indeed, a common way of identifying programming errors is with a “procedure execution” in which the programmer's finger identifies the point of execution as a PC would. The high-level language is essentially the machine language of a virtual machine,[12] too complex to be built as hardware but instead emulated or interpreted by software.

Vendors use different characters to symbolize the program counter in assembly language programs. While the usage of a "$" character is prevalent in Intel, Zilog, Texas Instruments, Toshiba, NEC, Siemens and AMD processor documentation, Motorola, Rockwell Semiconductor, Microchip Technology and Hitachi instead use a "*" character,[9] whereas SGS-Thomson Microelectronics uses "PC".[9]