Sterile neutrinos (or inert neutrinos) are hypothetical particles (neutral leptons – neutrinos) that are believed to interact only via gravity and not via any of the other fundamental interactions of the Standard Model.[1] The term sterile neutrino is used to distinguish them from the known active neutrinos in the Standard Model, which carry an isospin charge of ±+1/ 2  under the weak interaction. It typically refers to neutrinos with right-handed chirality (see right-handed neutrino), which may be added to the Standard Model. Particles that possess the quantum numbers of sterile neutrinos and masses great enough such that they do not interfere with the current theory of Big Bang Nucleosynthesis are often called neutral heavy leptons (NHLs) or heavy neutral leptons (HNLs).[2]

The existence of right-handed neutrinos is theoretically well-motivated, because the known active neutrinos are left-handed and all other known fermions have been observed with both left and right chirality.[3] They could also explain in a natural way the small active neutrino masses inferred from neutrino oscillation.[3] The mass of the right-handed neutrinos themselves is unknown and could have any value between 1015 GeV and less than 1 eV.[4] To comply with theories of leptogenesis and dark matter, there must be at least 3 types of sterile neutrinos (if they exist).[5] This is in contrast to the number of active neutrino types required to ensure the electroweak interaction is free of anomalies, which must be exactly 3: the number of charged leptons and quark generations.

The search for sterile neutrinos is an active area of particle physics. If they exist and their mass is smaller than the energies of particles in the experiment, they can be produced in the laboratory, either by mixing between active and sterile neutrinos or in high energy particle collisions. If they are heavier, the only directly observable consequence of their existence would be the observed active neutrino masses. They may, however, be responsible for a number of unexplained phenomena in physical cosmology and astrophysics, including dark matter, baryogenesis or hypothetical dark radiation.[4] In May 2018, physicists of the MiniBooNE experiment reported a stronger neutrino oscillation signal than expected, a possible hint of sterile neutrinos.[6][7] However, results of the MicroBooNE experiment showed no evidence of sterile neutrinos in October 2021.[8]

Experimental results show that all produced and observed neutrinos have left-handed helicities (spin antiparallel to momentum), and all antineutrinos have right-handed helicities, within the margin of error.[3] In the massless limit, it means that only one of two possible chiralities is observed for either particle. These are the only helicities (and chiralities) allowed in the Standard Model of particle interactions; particles with the contrary helicities are explicitly excluded from the formulas.[9]

Recent experiments such as neutrino oscillation, however, have shown that neutrinos have a non-zero mass, which is not predicted by the Standard Model and suggests new, unknown physics.[10] This unexpected mass explains neutrinos with right-handed helicity and antineutrinos with left-handed helicity: Since they do not move at the speed of light, their helicity is not relativistic invariant (it is possible to move faster than them and observe the opposite helicity).[11] Yet all neutrinos have been observed with left-handed chirality, and all antineutrinos right-handed. (See Chirality for the difference.)

Chirality is a fundamental property of particles and is relativistically invariant: It is the same regardless of the particle's speed and mass in every inertial reference frame.[12] However, a particle with mass that starts out with left-handed chirality can develop a right-handed component as it travels – unless it is massless, chirality is not conserved during the propagation of a free particle through space.

Such particles would belong to a singlet representation with respect to the strong interaction and the weak interaction, having zero electric charge, zero weak hypercharge, zero weak isospin, and, as with the other leptons, zero color charge, although they are conventionally represented to have a B − L quantum number of −1.[13] If the standard model is embedded in a hypothetical SO(10) grand unified theory, they can be assigned an X charge of −5. The left-handed anti-neutrino has a B − L of +1 and an X charge of +5.

Due to the lack of electric charge, hypercharge, and color charge, sterile neutrinos would not interact electromagnetically, weakly, or strongly, making them extremely difficult to detect. They have Yukawa interactions with ordinary leptons and Higgs bosons, which via the Higgs mechanism leads to mixing with ordinary neutrinos.

In experiments involving energies larger than their mass, sterile neutrinos would participate in all processes in which ordinary neutrinos take part, but with a quantum mechanical probability that is suppressed by a small mixing angle. That makes it possible to produce them in experiments, if they are light enough to be within the reach of current particle accelerators.

They would also interact gravitationally due to their mass, and if they are heavy enough, could explain cold dark matter or warm dark matter. In some grand unification theories, such as SO(10), they also interact via gauge interactions which are extremely suppressed at ordinary energies because their SO(10)-derived gauge boson is extremely massive. They do not appear at all in some other GUTs, such as the Georgi–Glashow model ( i.e., all its SU(5) charges or quantum numbers are zero).

All particles are initially massless under the Standard Model, since there are no Dirac mass terms in the Standard Model's Lagrangian. The only mass terms are generated by the Higgs mechanism, which produces non-zero Yukawa couplings between the left-handed components of fermions, the Higgs field, and their right-handed components. This occurs when the SU(2) doublet Higgs field [math]\displaystyle{ \phi }[/math] acquires its non-zero vacuum expectation value, [math]\displaystyle{ \nu }[/math], spontaneously breaking its SU(2)L × U(1) symmetry, and thus yielding non-zero Yukawa couplings:

Such is the case for charged leptons, like the electron, but within the standard model the right-handed neutrino does not exist. So absent the sterile right chiral neutrinos to pair up with the left chiral neutrinos, even with Yukawa coupling the active neutrinos remain massless. In other words, there are no mass-generating terms for neutrinos under the Standard Model: For each generation, the model only contains a left-handed neutrino and its antiparticle, a right-handed antineutrino, each of which is produced in weak eigenstates during weak interactions; the "sterile" neutrinos are omitted. (See neutrino masses in the Standard Model for a detailed explanation.)

In the seesaw mechanism, the model is extended to include the missing right-handed neutrinos and left-handed antineutrinos; one of the eigenvectors of the neutrino mass matrix is then hypothesized to be remarkably heavier than the other.

A sterile (right-chiral) neutrino would have the same weak hypercharge, weak isospin, and electric charge as its antiparticle, because all of these are zero and hence are unaffected by sign reversal.[lower-alpha 1]

Sterile neutrinos allow the introduction of a Dirac mass term as usual. This can yield the observed neutrino mass, but it requires that the strength of the Yukawa coupling be much weaker for the electron neutrino than the electron, without explanation. Similar problems (although less severe) are observed in the quark sector, where the top and bottom masses differ by a factor of 40.

Unlike for the left-handed neutrino, a Majorana mass term can be added for a sterile neutrino without violating local symmetries (weak isospin and weak hypercharge) since it has no weak charge. However, this would still violate total lepton number.

It is possible to include both Dirac and Majorana terms: this is done in the seesaw mechanism (below). In addition to satisfying the Majorana equation, if the neutrino were also its own antiparticle, then it would be the first Majorana fermion. In that case, it could annihilate with another neutrino, allowing neutrinoless double beta decay.[14] The other case is that it is a Dirac fermion, which is not its own antiparticle.

In addition to the left-handed neutrino, which couples to its family charged lepton in weak charged currents, if there is also a right-handed sterile neutrino partner (a weak isosinglet with zero charge) then it is possible to add a Majorana mass term without violating electroweak symmetry.[15] Both neutrinos have mass and handedness is no longer preserved (thus "left or right-handed neutrino" means that the state is mostly left or right-handed). To get the neutrino mass eigenstates, we have to diagonalize the general mass matrix [math]\displaystyle{ M_{\nu} }[/math]:

Apart from empirical evidence, there is also a theoretical justification for the seesaw mechanism in various extensions to the Standard Model. Both Grand Unification Theories (GUTs) and left-right symmetrical models predict the following relation:

According to GUTs and left-right models, the right-handed neutrino is extremely heavy: [math]\displaystyle{ M_\text{NHL}\approx }[/math] 105 to 1012 GeV, while the smaller eigenvalue is approximately equal to[16]

The production and decay of sterile neutrinos could happen through the mixing with virtual ("off mass shell") neutrinos. There were several experiments set up to discover or observe NHLs, for example the NuTeV (E815) experiment at Fermilab or LEP-L3 at CERN. They all led to establishing limits to observation, rather than actual observation of those particles. If they are indeed a constituent of dark matter, sensitive X-ray detectors would be needed to observe the radiation emitted by their decays.[21] 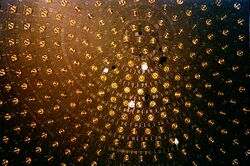 The interior of the MiniBooNE detector at Fermilab. This detector was created to measure the oscillation of neutrinos.

Sterile neutrinos may mix with ordinary neutrinos via a Dirac mass after electroweak symmetry breaking, in analogy to quarks and charged leptons.[22] Sterile neutrinos and (in more-complicated models) ordinary neutrinos may also have Majorana masses. In the type 1 seesaw mechanism both Dirac and Majorana masses are used to drive ordinary neutrino masses down and make the sterile neutrinos much heavier than the Standard Model's interacting neutrinos. In GUT scale seesaw models the heavy neutrinos can be as heavy as the GUT scale (≈1015 GeV).[23] In other models, such as the νMSM model where their masses are in the keV to GeV range, they could be lighter than the weak gauge bosons W and Z.[24] A light (with the mass ≈1 eV) sterile neutrino was suggested as a possible explanation of the results of the Liquid Scintillator Neutrino Detector experiment. On 11 April 2007, researchers at the MiniBooNE experiment at Fermilab announced that they had not found any evidence supporting the existence of such a sterile neutrino.[25] More-recent results and analysis have provided some support for the existence of the sterile neutrino.[26]

Two separate detectors near a nuclear reactor in France found 3% of anti-neutrinos missing. They suggested the existence of a fourth neutrino with a mass of 1.2 eV.[27] Sterile neutrinos are also candidates for dark radiation. Daya Bay has also searched for a light sterile neutrino and excluded some mass regions.[28] Daya Bay Collaboration measured the anti-neutrino energy spectrum, and found that anti-neutrinos at an energy of around 5 MeV are in excess relative to theoretical expectations. It also recorded 6% missing anti-neutrinos.[29] This could suggest either that sterile neutrinos exist or that our understanding of some other aspect of neutrinos is incomplete.

The number of neutrinos and the masses of the particles can have large-scale effects that shape the appearance of the cosmic microwave background. The total number of neutrino species, for instance, affects the rate at which the cosmos expanded in its earliest epochs: More neutrinos means a faster expansion. The Planck Satellite 2013 data release is compatible with the existence of a sterile neutrino. The implied mass range is from 0–3 eV.[30] In 2016, scientists at the IceCube Neutrino Observatory did not find any evidence for the sterile neutrino.[31] However, in May 2018, physicists of the MiniBooNE experiment reported a stronger neutrino oscillation signal than expected, a possible hint of sterile neutrinos.[6][7] Since then, in October 2021, the MicroBooNE experiment's first results showed no hints of sterile neutrinos, rather finding the results aligning with the standard model's three neutrino flavours.[32] This result had not found an explanation for MiniBooNE's anomalous results, however.

In June 2022, the BEST experiment released two paper observing a 20-24% deficit in the production of the isotope germanium expected from the reaction 71Ga[math]\displaystyle{ + \nu_e \rightarrow e^{-}+ }[/math]71Ge, summing evidence for the so called "Gallium anomaly" pointing that a sterile neutrino explanation can be consistent with the data.[33][34][35]