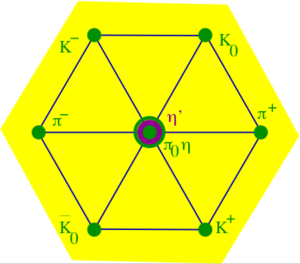 Figure 1: The pseudoscalar meson nonet. Members of the original meson "octet" are shown in green, the singlet in magenta. Although these mesons are now grouped into a nonet, the Eightfold Way name derives from the patterns of eight for the mesons and baryons in the original classification scheme.

In particle physics, the quark model is a classification scheme for hadrons in terms of their valence quarks—the quarks and antiquarks which give rise to the quantum numbers of the hadrons. The quark model underlies "flavor SU(3)", or the Eightfold Way, the successful classification scheme organizing the large number of lighter hadrons that were being discovered starting in the 1950s and continuing through the 1960s. It received experimental verification beginning in the late 1960s and is a valid effective classification of them to date. The model was independently proposed by physicists Murray Gell-Mann,Cite error: Closing </ref> missing for <ref> tag

Instead, six months later, Moo-Young Han and Yoichiro Nambu suggested the existence of three triplets of quarks to solve this problem, but flavor and color intertwined in that model: They did not commute.[1]

The modern concept of color completely commuting with all other charges and providing the strong force charge was articulated in 1973, by William Bardeen, Harald Fritzsch, and Murray Gell-Mann.[2][3]

States outside the quark model

While the quark model is derivable from the theory of quantum chromodynamics, the structure of hadrons is more complicated than this model allows. The full quantum mechanical wave function of any hadron must include virtual quark pairs as well as virtual gluons, and allows for a variety of mixings. There may be hadrons which lie outside the quark model. Among these are the glueballs (which contain only valence gluons), hybrids (which contain valence quarks as well as gluons) and "exotic hadrons" (such as tetraquarks or pentaquarks).