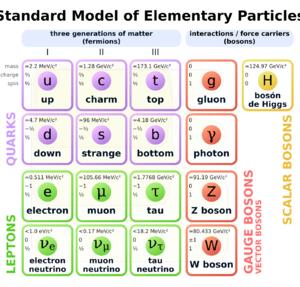 The Standard Model of elementary particles, with the gauge bosons in the fourth column in red

Gauge bosons are different from the other kinds of bosons: first, fundamental scalar bosons (the Higgs boson); second, mesons, which are composite bosons, made of quarks; third, larger composite, non-force-carrying bosons, such as certain atoms.

Gauge bosons in the Standard Model

Isolated gluons do not occur because they are colour-charged and subject to colour confinement.

Gauge invariance requires that gauge bosons are described mathematically by field equations for massless particles. Otherwise, the mass terms add non-zero additional terms to the lagrangian under gauge transformations, violating gauge symmetry. Therefore, at a naïve theoretical level, all gauge bosons are required to be massless, and the forces that they describe are required to be long-ranged. The conflict between this idea and experimental evidence that the weak and strong interactions have a very short range requires further theoretical insight.

According to the Standard Model, the W and Z bosons gain mass via the Higgs mechanism. In the Higgs mechanism, the four gauge bosons (of SU(2)×U(1) symmetry) of the unified electroweak interaction couple to a Higgs field. This field undergoes spontaneous symmetry breaking due to the shape of its interaction potential. As a result, the universe is permeated by a nonzero Higgs vacuum expectation value (VEV). This VEV couples to three of the electroweak gauge bosons (the Ws and Z), giving them mass; the remaining gauge boson remains massless (the photon). This theory also predicts the existence of a scalar Higgs boson, which has been observed in experiments at the LHC.[4]

Beyond the Standard Model

The Georgi–Glashow model predicts additional gauge bosons named X and Y bosons. The hypothetical X and Y bosons mediate interactions between quarks and leptons, hence violating conservation of baryon number and causing proton decay. Such bosons would be even more massive than W and Z bosons due to symmetry breaking. Analysis of data collected from such sources as the Super-Kamiokande neutrino detector has yielded no evidence of X and Y bosons.

The fourth fundamental interaction, gravity, may also be carried by a boson, called the graviton. In the absence of experimental evidence and a mathematically coherent theory of quantum gravity, it is unknown whether this would be a gauge boson or not. The role of gauge invariance in general relativity is played by a similar[clarification needed] symmetry: diffeomorphism invariance.