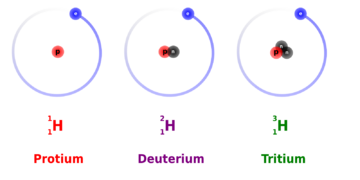 Hydrogen is the only element whose isotopes have different names that remain in common use today: the 2H (or hydrogen-2) isotope is deuterium[5] and the 3H (or hydrogen-3) isotope is tritium.[6] The symbols D and T are sometimes used for deuterium and tritium. The IUPAC accepts the D and T symbols, but recommends using standard isotopic symbols (2H and 3H) instead to avoid confusion in the alphabetic sorting of chemical formulas.[7] The isotope 1H, with no neutrons, is sometimes called protium.[8] (During the early study of radioactivity, some other heavy radioactive isotopes were given names, but such names are rarely used today.) 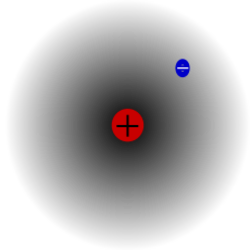 Protium, the most common isotope of hydrogen, consists of one proton and one electron. Unique among all stable isotopes, it has no neutrons. (see diproton for a discussion of why others do not exist)

1H (atomic mass 1.007825031898(14) Da) is the most common hydrogen isotope with an abundance of more than 99.98%. Because the nucleus of this isotope consists of only a single proton, it is given the formal name protium.

The proton has never been observed to decay, and hydrogen-1 is therefore considered a stable isotope. Some grand unified theories proposed in the 1970s predict that proton decay can occur with a half-life between 1028 and 1036 years.[10] If this prediction is found to be true, then hydrogen-1 (and indeed all nuclei now believed to be stable) are only observationally stable. To date, experiments have shown that the minimum mean lifetime of the proton is in excess of 3.6×1029 years.[11] 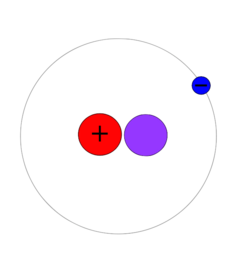 A deuterium atom contains one proton, one neutron, and one electron.

2H (atomic mass 2.014101777844(15) Da), the other stable hydrogen isotope, is known as deuterium and contains one proton and one neutron in its nucleus. The nucleus of deuterium is called a deuteron. Deuterium comprises 0.0026–0.0184% (by population, not by mass) of hydrogen samples on Earth, with the lower number tending to be found in samples of hydrogen gas and the higher enrichment (0.015% or 150 ppm) typical of ocean water. Deuterium on Earth has been enriched with respect to its initial concentration in the Big Bang and the outer solar system (about 27 ppm, by atom fraction) and its concentration in older parts of the Milky Way galaxy (about 23 ppm). Presumably the differential concentration of deuterium in the inner solar system is due to the lower volatility of deuterium gas and compounds, enriching deuterium fractions in comets and planets exposed to significant heat from the Sun over billions of years of solar system evolution.

Deuterium is not radioactive, and does not represent a significant toxicity hazard. Water enriched in molecules that include deuterium instead of protium is called heavy water. Deuterium and its compounds are used as a non-radioactive label in chemical experiments and in solvents for 1H-nuclear magnetic resonance spectroscopy. Heavy water is used as a neutron moderator and coolant for nuclear reactors. Deuterium is also a potential fuel for commercial nuclear fusion. 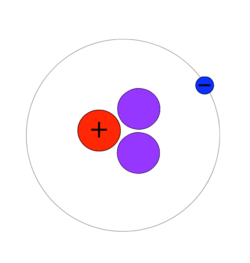 A tritium atom contains one proton, two neutrons, and one electron.

3H (atomic mass 3.016049281320(81) Da) is known as tritium and contains one proton and two neutrons in its nucleus. It is radioactive, decaying into helium-3 through β− decay with a half-life of 12.32(2) years.[nb 1][2] Trace amounts of tritium occur naturally because of the interaction of cosmic rays with atmospheric gases. Tritium has also been released during nuclear weapons tests. It is used in thermonuclear fusion weapons, as a tracer in isotope geochemistry, and specialized in self-powered lighting devices.

The most common method of producing tritium is by bombarding a natural isotope of lithium, lithium-6, with neutrons in a nuclear reactor.

Tritium was once used routinely in chemical and biological labeling experiments as a radioactive tracer. This has become less common, but still happens.[12] D-T nuclear fusion uses tritium as its main reactant, along with deuterium, liberating energy through the loss of mass when the two nuclei collide and fuse at high temperatures.

4H (atomic mass 4.02643(11)) contains one proton and three neutrons in its nucleus. It is a highly unstable isotope of hydrogen. It has been synthesized in the laboratory by bombarding tritium with fast-moving deuterium nuclei.[13] In this experiment, the tritium nucleus captured a neutron from the fast-moving deuterium nucleus. The presence of the hydrogen-4 was deduced by detecting the emitted protons. It decays through neutron emission into hydrogen-3 (tritium) with a half-life of 139(10) ys (or 1.39(10)×10−22 s).

In the 1955 satirical novel The Mouse That Roared, the name quadium was given to the hydrogen-4 isotope that powered the Q-bomb that the Duchy of Grand Fenwick captured from the United States.

5H (atomic mass 5.03531(10)) is a highly unstable isotope of hydrogen. The nucleus consists of a proton and four neutrons. It has been synthesized in the laboratory by bombarding tritium with fast-moving tritium nuclei.[13][14] In this experiment, one tritium nucleus captures two neutrons from the other, becoming a nucleus with one proton and four neutrons. The remaining proton may be detected, and the existence of hydrogen-5 deduced. It decays through double neutron emission into hydrogen-3 (tritium) and has a half-life of 86(6) ys (8.6(6)×10−23 s) - the shortest half-life of any known nuclide.[2]

7H (atomic mass 7.05275(108)) consists of a proton and six neutrons. It was first synthesized in 2003 by a group of Russian, Japanese and French scientists at RIKEN's Radioactive Isotope Beam Factory by bombarding hydrogen with helium-8 atoms. In the resulting reaction, all six of the helium-8 neutrons were donated to the hydrogen's nucleus. The two remaining protons were detected by the "RIKEN telescope", a device composed of several layers of sensors, positioned behind the target of the RI Beam cyclotron.[4] Hydrogen-7 has a half life of 652(558) ys (6.52(5.58)×10−22 s).[2]

Decay times are in yoctoseconds (10−24 s) for all these isotopes except 3H, which is expressed in years.