A radionuclide (radioactive nuclide, radioisotope or radioactive isotope) is a nuclide that has excess nuclear energy, making it unstable. This excess energy can be used in one of three ways: emitted from the nucleus as gamma radiation; transferred to one of its electrons to release it as a conversion electron; or used to create and emit a new particle (alpha particle or beta particle) from the nucleus. During those processes, the radionuclide is said to undergo radioactive decay.[1] These emissions are considered ionizing radiation because they are powerful enough to liberate an electron from another atom. The radioactive decay can produce a stable nuclide or will sometimes produce a new unstable radionuclide which may undergo further decay. Radioactive decay is a random process at the level of single atoms: it is impossible to predict when one particular atom will decay.[2][3][4][5] However, for a collection of atoms of a single nuclide the decay rate, and thus the half-life (t1/2) for that collection, can be calculated from their measured decay constants. The range of the half-lives of radioactive atoms has no known limits and spans a time range of over 55 orders of magnitude.

Unplanned exposure to radionuclides generally has a harmful effect on living organisms including humans, although low levels of exposure occur naturally without harm. The degree of harm will depend on the nature and extent of the radiation produced, the amount and nature of exposure (close contact, inhalation or ingestion), and the biochemical properties of the element; with increased risk of cancer the most usual consequence. However, radionuclides with suitable properties are used in nuclear medicine for both diagnosis and treatment. An imaging tracer made with radionuclides is called a radioactive tracer. A pharmaceutical drug made with radionuclides is called a radiopharmaceutical.

Many of these radionuclides exist only in trace amounts in nature, including all cosmogenic nuclides. Secondary radionuclides will occur in proportion to their half-lives, so short-lived ones will be very rare. For example, polonium can be found in uranium ores at about 0.1 mg per metric ton (1 part in 1010).[7][8] Further radionuclides may occur in nature in virtually undetectable amounts as a result of rare events such as spontaneous fission or uncommon cosmic ray interactions.

Radionuclides are produced as an unavoidable result of nuclear fission and thermonuclear explosions. The process of nuclear fission creates a wide range of fission products, most of which are radionuclides. Further radionuclides can be created from irradiation of the nuclear fuel (creating a range of actinides) and of the surrounding structures, yielding activation products. This complex mixture of radionuclides with different chemistries and radioactivity makes handling nuclear waste and dealing with nuclear fallout particularly problematic.

Radionuclides are used in two major ways: either for their radiation alone (irradiation, nuclear batteries) or for the combination of chemical properties and their radiation (tracers, biopharmaceuticals).

The following table lists properties of selected radionuclides illustrating the range of properties and uses.

Americium-241 container in a smoke detector. 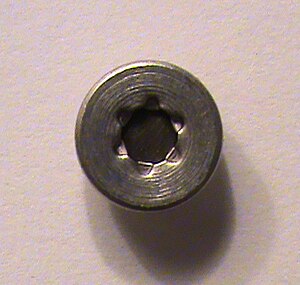 Americium-241 capsule as found in smoke detector. The circle of darker metal in the center is americium-241; the surrounding casing is aluminium.

Radionuclides are present in many homes as they are used inside the most common household smoke detectors. The radionuclide used is americium-241, which is created by bombarding plutonium with neutrons in a nuclear reactor. It decays by emitting alpha particles and gamma radiation to become neptunium-237. Smoke detectors use a very small quantity of 241Am (about 0.29 micrograms per smoke detector) in the form of americium dioxide. 241Am is used as it emits alpha particles which ionize the air in the detector's ionization chamber. A small electric voltage is applied to the ionized air which gives rise to a small electric current. In the presence of smoke, some of the ions are neutralized, thereby decreasing the current, which activates the detector's alarm.[13][14]

Radionuclides that find their way into the environment may cause harmful effects as radioactive contamination. They can also cause damage if they are excessively used during treatment or in other ways exposed to living beings, by radiation poisoning. Potential health damage from exposure to radionuclides depends on a number of factors, and "can damage the functions of healthy tissue/organs. Radiation exposure can produce effects ranging from skin redness and hair loss, to radiation burns and acute radiation syndrome. Prolonged exposure can lead to cells being damaged and in turn lead to cancer. Signs of cancerous cells might not show up until years, or even decades, after exposure."[15]

Summary table for classes of nuclides, stable and radioactive

Following is a summary table for the list of 989 nuclides with half-lives greater than one hour. A total of 252 nuclides have never been observed to decay, and are classically considered stable. Of these, 90 are believed to be absolutely stable except to proton decay (which has never been observed), while the rest are "observationally stable" and theoretically can undergo radioactive decay with extremely long half-lives.

The remaining tabulated radionuclides have half-lives longer than 1 hour, and are well-characterized (see list of nuclides for a complete tabulation). They include 30 nuclides with measured half-lives longer than the estimated age of the universe (13.8 billion years[16]), and another four nuclides with half-lives long enough (> 100 million years) that they are radioactive primordial nuclides, and may be detected on Earth, having survived from their presence in interstellar dust since before the formation of the solar system, about 4.6 billion years ago. Another 60+ short-lived nuclides can be detected naturally as daughters of longer-lived nuclides or cosmic-ray products. The remaining known nuclides are known solely from artificial nuclear transmutation.

Numbers are not exact, and may change slightly in the future, as "stable nuclides" are observed to be radioactive with very long half-lives.

This is a summary table[17] for the 989 nuclides with half-lives longer than one hour (including those that are stable), given in list of nuclides.

This list covers common isotopes, most of which are available in very small quantities to the general public in most countries. Others that are not publicly accessible are traded commercially in industrial, medical, and scientific fields and are subject to government regulation.