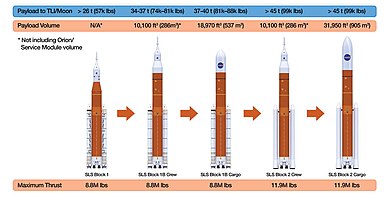 Configurations of the Space Launch System – Block 1 with the ICPS, Block 1B with the EUS, and Block 2 with upgraded boosters and larger payload fairing

As of 2019[update], four flights of the Space Launch System (SLS) – a Shuttle-derived, super heavy-lift expendable launch vehicle – are planned for the 2020s. The current launch manifest includes three flights in support of the Artemis program, a human spaceflight project aimed at establishing a permanent human presence on the Moon, and the launch of the Europa Clipper to Jupiter. The flights will launch from the vehicle's dedicated pad at Kennedy Space Center's Launch Complex 39B, and will use either its Block 1 configuration with a modified Delta Cryogenic Second Stage known as the Interim Cryogenic Propulsion Stage (ICPS), or its Block 1B configuration with the Exploration Upper Stage (EUS).

A proposed Europa Lander would launch aboard an SLS vehicle

In early 2019, then-Associate Administrator for Human Exploration William H. Gerstenmaier drafted a proposal for five more launches of SLS Block 1B launch vehicles between 2024 and 2028 in support of the Artemis program. These include four crewed launches of the Orion spacecraft.[1][2] In 2012, Skylab II was proposed by an engineer working with NASA's Marshall Space Flight Center. It would use the EUS hydrogen tank to build a 21st-century version of Skylab.[3][4][5] The SLS has been proposed as the launch vehicle for the future Large UV Optical Infrared Surveyor (LUVOIR) space telescope, which will have a main segmented mirror between 8 and 16 meters in diameter,[6] making it 300 times more powerful than Hubble Space Telescope.[7] It would be deployed at the Earth-Sun L2 point[6][8] in 2035.[9] Proposals by Bigelow Aerospace, Boeing, Lockheed Martin, Orbital ATK, Sierra Nevada Corporation, Space Systems Loral, and NanoRacks to build the Deep Space Habitat – a spacecraft with a large enough living space for humans to travel to destinations such as Mars, near Earth asteroids, or cislunar space – all envisioned a launch aboard an SLS vehicle.[10]

The proposed Europa Lander, which had formerly been a part of the Europa Clipper mission, is now proposed to be launched aboard an SLS in the mid-2020s.[11] The joint NASA-ESA Titan Saturn System Mission proposal envisioned the SLS as an option for launch.[12][13] The SLS has also been proposed by Boeing as a launch vehicle for a Uranus probe concept developed by NASA. The rocket would "deliver a small payload into orbit around Uranus and a shallow probe into the planet's atmosphere." The mission would study the Uranian atmosphere, magnetic and thermal characteristics, gravitational harmonics, as well as do flybys of Uranian moons.[8][14] In addition, a 2017 study suggested that a single SLS Block 1B launch vehicle could launch two spacecraft, one to each ice giant, with launch dates suggested from 2024 to 2037 followed by a four-year transit time.[15]