Valence shell electron pair repulsion (VSEPR) theory (/ˈvɛspər, vəˈsɛpər/ VESP-ər,[1]:410 və-SEP-ər[2]), is a model used in chemistry to predict the geometry of individual molecules from the number of electron pairs surrounding their central atoms.[3] It is also named the Gillespie-Nyholm theory after its two main developers, Ronald Gillespie and Ronald Nyholm.

The premise of VSEPR is that the valence electron pairs surrounding an atom tend to repel each other and will, therefore, adopt an arrangement that minimizes this repulsion. This in turn decreases the molecule's energy and increases its stability, which determines the molecular geometry. Gillespie has emphasized that the electron-electron repulsion due to the Pauli exclusion principle is more important in determining molecular geometry than the electrostatic repulsion.[4]

The insights of VSEPR theory are derived from topological analysis of the electron density of molecules. Such quantum chemical topology (QCT) methods include the electron localization function (ELF) and the quantum theory of atoms in molecules (AIM or QTAIM).[4][5] Hence, VSEPR is unrelated to wave function-based methods such as orbital hybridisation in valence bond theory.[6]

The idea of a correlation between molecular geometry and number of valence electron pairs (both shared and unshared pairs) was originally proposed in 1939 by Ryutaro Tsuchida in Japan,[7] and was independently presented in a Bakerian Lecture in 1940 by Nevil Sidgwick and Herbert Powell of the University of Oxford.[8] In 1957, Ronald Gillespie and Ronald Sydney Nyholm of University College London refined this concept into a more detailed theory, capable of choosing between various alternative geometries.[9][10]

VSEPR theory is used to predict the arrangement of electron pairs around central atoms in molecules, especially simple and symmetric molecules. A central atom is defined in this theory as an atom which is bonded to two or more other atoms, while a terminal atom is bonded to only one other atom.[1]:398 For example in the molecule methyl isocyanate (H3C-N=C=O), the two carbons and one nitrogen are central atoms, and the three hydrogens and one oxygen are terminal atoms.[1]:416 The geometry of the central atoms and their non-bonding electron pairs in turn determine the geometry of the larger whole molecule.

As a tool in predicting the geometry adopted with a given number of electron pairs, an often used physical demonstration of the principle of minimal electron pair repulsion utilizes inflated balloons. Through handling, balloons acquire a slight surface electrostatic charge that results in the adoption of roughly the same geometries when they are tied together at their stems as the corresponding number of electron pairs. For example, five balloons tied together adopt the trigonal bipyramidal geometry, just as do the five bonding pairs of a PCl5 molecule. 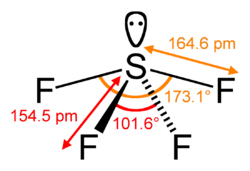 Sulfur tetrafluoride has a steric number of 5.

The overall geometry is further refined by distinguishing between bonding and nonbonding electron pairs. The bonding electron pair shared in a sigma bond with an adjacent atom lies further from the central atom than a nonbonding (lone) pair of that atom, which is held close to its positively charged nucleus. VSEPR theory therefore views repulsion by the lone pair to be greater than the repulsion by a bonding pair. As such, when a molecule has 2 interactions with different degrees of repulsion, VSEPR theory predicts the structure where lone pairs occupy positions that allow them to experience less repulsion. Lone pair–lone pair (lp–lp) repulsions are considered stronger than lone pair–bonding pair (lp–bp) repulsions, which in turn are considered stronger than bonding pair–bonding pair (bp–bp) repulsions, distinctions that then guide decisions about overall geometry when 2 or more non-equivalent positions are possible.[1]:410–417 For instance, when 5 valence electron pairs surround a central atom, they adopt a trigonal bipyramidal molecular geometry with two collinear axial positions and three equatorial positions. An electron pair in an axial position has three close equatorial neighbors only 90° away and a fourth much farther at 180°, while an equatorial electron pair has only two adjacent pairs at 90° and two at 120°. The repulsion from the close neighbors at 90° is more important, so that the axial positions experience more repulsion than the equatorial positions; hence, when there are lone pairs, they tend to occupy equatorial positions as shown in the diagrams of the next section for steric number five.[11]

The difference between lone pairs and bonding pairs may also be used to rationalize deviations from idealized geometries. For example, the H2O molecule has four electron pairs in its valence shell: two lone pairs and two bond pairs. The four electron pairs are spread so as to point roughly towards the apices of a tetrahedron. However, the bond angle between the two O–H bonds is only 104.5°, rather than the 109.5° of a regular tetrahedron, because the two lone pairs (whose density or probability envelopes lie closer to the oxygen nucleus) exert a greater mutual repulsion than the two bond pairs.[1]:410–417[11]

Based on the steric number and distribution of Xs and Es, VSEPR theory makes the predictions in the following tables.

For main-group elements, there are stereochemically active lone pairs E whose number can vary between 0 to 3. Note that the geometries are named according to the atomic positions only and not the electron arrangement. For example, the description of AX2E1 as a bent molecule means that the three atoms AX2 are not in one straight line, although the lone pair helps to determine the geometry.

The lone pairs on transition metal atoms are usually stereochemically inactive, meaning that their presence does not change the molecular geometry. For example, the hexaaquo complexes M(H2O)6 are all octahedral for M = V3+, Mn3+, Co3+, Ni2+ and Zn2+, despite the fact that the electronic configurations of the central metal ion are d2, d4, d6, d8 and d10 respectively.[14]:542 The Kepert model ignores all lone pairs on transition metal atoms, so that the geometry around all such atoms corresponds to the VSEPR geometry for AXn with 0 lone pairs E.[16][14]:542 This is often written MLn, where M = metal and L = ligand. The Kepert model predicts the following geometries for coordination numbers of 2 through 9:

The methane molecule (CH4) is tetrahedral because there are four pairs of electrons. The four hydrogen atoms are positioned at the vertices of a tetrahedron, and the bond angle is cos−1(−​1⁄3) ≈ 109° 28′.[17][18] This is referred to as an AX4 type of molecule. As mentioned above, A represents the central atom and X represents an outer atom.[1]:410–417

The ammonia molecule (NH3) has three pairs of electrons involved in bonding, but there is a lone pair of electrons on the nitrogen atom.[1]:392–393 It is not bonded with another atom; however, it influences the overall shape through repulsions. As in methane above, there are four regions of electron density. Therefore, the overall orientation of the regions of electron density is tetrahedral. On the other hand, there are only three outer atoms. This is referred to as an AX3E type molecule because the lone pair is represented by an E.[1]:410–417 By definition, the molecular shape or geometry describes the geometric arrangement of the atomic nuclei only, which is trigonal-pyramidal for NH3.[1]:410–417

There are groups of compounds where VSEPR fails to predict the correct geometry.

One example of the AX2E2 geometry is molecular lithium oxide, Li2O, a linear rather than bent structure, which is ascribed to its bonds being essentially ionic and the strong lithium-lithium repulsion that results.[23] Another example is O(SiH3)2 with an Si–O–Si angle of 144.1°, which compares to the angles in Cl2O (110.9°), (CH3)2O (111.7°), and N(CH3)3 (110.9°).[24] Gillespie and Robinson rationalize the Si–O–Si bond angle based on the observed ability of a ligand's lone pair to most greatly repel other electron pairs when the ligand electronegativity is greater than or equal to that of the central atom.[24] In O(SiH3)2, the central atom is more electronegative, and the lone pairs are less localized and more weakly repulsive. The larger Si–O–Si bond angle results from this and strong ligand-ligand repulsion by the relatively large -SiH3 ligand.[24] Burford et al showed through X-ray diffraction studies that Cl3Al–O–PCl3 has a linear Al–O–P bond angle and is therefore a non-VSEPR molecule. 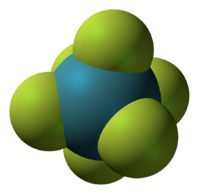 Xenon hexafluoride, which has a distorted octahedral geometry.

Some AX6E1 molecules, e.g. xenon hexafluoride (XeF6) and the Te(IV) and Bi(III) anions, TeCl2−6, TeBr2−6, BiCl3−6, BiBr3−6 and BiI3−6, are octahedral, rather than pentagonal pyramids, and the lone pair does not affect the geometry to the degree predicted by VSEPR.[25] Similarly, the octafluoroxenate ion (XeF2−8) in nitrosonium octafluoroxenate(VI)[14]:498[26][27] is a square antiprism with minimal distortion, despite having a lone pair. One rationalization is that steric crowding of the ligands allows little or no room for the non-bonding lone pair;[24] another rationalization is the inert pair effect.[14]:214

The Kepert model predicts that ML4 transition metal molecules are tetrahedral in shape, and it cannot explain the formation of square planar complexes.[14]:542 The majority of such complexes exhibit a d8 configuration as for the tetrachloroplatinate (PtCl2−4) ion. The explanation of the shape of square planar complexes involves electronic effects and requires the use of crystal field theory.[14]:562–4 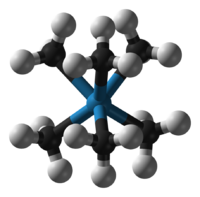 Hexamethyltungsten, a transition metal complex whose geometry is different from main-group coordination.

Some transition metal complexes with low d electron count have unusual geometries, which can be ascribed to d subshell bonding interaction.[28] Gillespie found that this interaction produces bonding pairs that also occupy the respective antipodal points (ligand opposed) of the sphere.[29][4] This phenomenon is an electronic effect resulting from the bilobed shape of the underlying sdx hybrid orbitals.[30][31] The repulsion of these bonding pairs leads to a different set of shapes.

Relativistic effects on the electron orbitals of superheavy elements is predicted to influence the molecular geometry of some compounds. For instance, the 6d5/2 electrons in nihonium play an unexpectedly strong role in bonding, so NhF3 should assume a T-shaped geometry, instead of a trigonal planar geometry like its lighter congener BF3.[36] In contrast, the extra stability of the 7p1/2 electrons in tennessine are predicted to make TsF3 trigonal planar, unlike the T-shaped geometry observed for IF3 and predicted for AtF3;[37] similarly, OgF4 should have a tetrahedral geometry, while XeF4 has a square planar geometry and RnF4 is predicted to have the same.[38]

The VSEPR theory can be extended to molecules with an odd number of electrons by treating the unpaired electron as a "half electron pair" — for example, Gillespie and Nyholm[9]:364–365 suggested that the decrease in the bond angle in the series NO+2 (180°), NO2 (134°), NO−2 (115°) indicates that a given set of bonding electron pairs exert a weaker repulsion on a single non-bonding electron than on a pair of non-bonding electrons. In effect, they considered nitrogen dioxide as an AX2E0.5 molecule, with a geometry intermediate between NO+2 and NO−2. Similarly, chlorine dioxide (ClO2) is an AX2E1.5 molecule, with a geometry intermediate between ClO+2 and ClO−2.

Finally, the methyl radical (CH3) is predicted to be trigonal pyramidal like the methyl anion (CH−3), but with a larger bond angle (as in the trigonal planar methyl cation (CH+3)). However, in this case, the VSEPR prediction is not quite true, as CH3 is actually planar, although its distortion to a pyramidal geometry requires very little energy.[39]