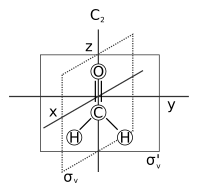 Molecular symmetry in chemistry describes the symmetry present in molecules and the classification of these molecules according to their symmetry. Molecular symmetry is a fundamental concept in chemistry, as it can be used to predict or explain many of a molecule's chemical properties, such as whether or not it has a dipole moment, as well as its allowed spectroscopic transitions. To do this it is necessary to use group theory. This involves classifying the states of the molecule using the irreducible representations from the character table of the symmetry group of the molecule. Symmetry is useful in the study of molecular orbitals, with applications to the Hückel method, to ligand field theory, and to the Woodward-Hoffmann rules. Many university level textbooks on physical chemistry, quantum chemistry, spectroscopy and inorganic chemistry discuss symmetry.[1][2][3][4][5][6] Another framework on a larger scale is the use of crystal systems to describe crystallographic symmetry in bulk materials.

There are many techniques for determining the symmetry of a given molecule, including X-ray crystallography and various forms of spectroscopy. Spectroscopic notation is based on symmetry considerations.

The point group symmetry of a molecule is described using 5 types of symmetry element.

XeF4, with square planar geometry, has 1 C4 axis and 4 C2 axes orthogonal to C4. These five axes plus the mirror plane perpendicular to the C4 axis define the D4h symmetry group of the molecule.

For linear molecules, either clockwise or counterclockwise rotation about the molecular axis by any angle Φ is a symmetry operation.

The symmetry operations of a molecule (or other object) form a group. In mathematics, a group is a set with a binary operation that satisfies the four properties listed below.

A symmetry group obeys the defining properties of any group.

The order of a group is the number of elements in the group. For groups of small orders, the group properties can be easily verified by considering its composition table, a table whose rows and columns correspond to elements of the group and whose entries correspond to their products.

Flowchart for determining the point group of a molecule

One can determine the symmetry operations of the point group for a particular molecule by considering the geometrical symmetry of its molecular model. However, when one uses a point group to classify molecular states, the operations in it are not to be interpreted in the same way. Instead the operations are interpreted as rotating and/or reflecting the vibronic (vibration-electronic) coordinates[10] and these operations commute with the vibronic Hamiltonian. They are "symmetry operations" for that vibronic Hamiltonian. The point group is used to classify by symmetry the vibronic eigenstates of a rigid molecule. The symmetry classification of the rotational levels, the eigenstates of the full (rotation-vibration-electronic) Hamiltonian, requires the use of the appropriate permutation-inversion group as introduced by Longuet-Higgins.[11] Point groups describe the geometrical symmetry of a molecule whereas permutation-inversion groups describe the energy-invariant symmetry.

Assigning each molecule a point group classifies molecules into categories with similar symmetry properties. For example, PCl3, POF3, XeO3, and NH3 all share identical symmetry operations.[12] They all can undergo the identity operation E, two different C3 rotation operations, and three different σv plane reflections without altering their identities, so they are placed in one point group, C3v, with order 6.[9] Similarly, water (H2O) and hydrogen sulfide (H2S) also share identical symmetry operations. They both undergo the identity operation E, one C2 rotation, and two σv reflections without altering their identities, so they are both placed in one point group, C2v, with order 4.[13] This classification system helps scientists to study molecules more efficiently, since chemically related molecules in the same point group tend to exhibit similar bonding schemes, molecular bonding diagrams, and spectroscopic properties.[9] Point group symmetry describes the symmetry of a molecule when fixed at its equilibrium configuration in a particular electronic state. It does not allow for tunneling between minima nor for the change in shape that can come about from the centrifugal distortion effects of molecular rotation.

The following table lists many of the point groups applicable to molecules, labelled using the Schoenflies notation, which is common in chemistry and molecular spectroscopy. The descriptions include common shapes of molecules, which can be explained by the VSEPR model. In each row, the descriptions and examples have no higher symmetries, meaning that the named point group captures all of the point symmetries.

The representations are labeled according to a set of conventions:

The tables also capture information about how the Cartesian basis vectors, rotations about them, and quadratic functions of them transform by the symmetry operations of the group, by noting which irreducible representation transforms in the same way. These indications are conventionally on the righthand side of the tables. This information is useful because chemically important orbitals (in particular p and d orbitals) have the same symmetries as these entities.

The character table for the C2v symmetry point group is given below:

Consider the example of water (H2O), which has the C2v symmetry described above. The 2px orbital of oxygen has B1 symmetry as in the fourth row of the character table above, with x in the sixth column). It is oriented perpendicular to the plane of the molecule and switches sign with a C2 and a σv'(yz) operation, but remains unchanged with the other two operations (obviously, the character for the identity operation is always +1). This orbital's character set is thus {1, −1, 1, −1}, corresponding to the B1 irreducible representation. Likewise, the 2pz orbital is seen to have the symmetry of the A1 irreducible representation (i.e.: none of the symmetry operations change it), 2py B2, and the 3dxy orbital A2. These assignments and others are noted in the rightmost two columns of the table.

Hans Bethe used characters of point group operations in his study of ligand field theory in 1929, and Eugene Wigner used group theory to explain the selection rules of atomic spectroscopy.[16] The first character tables were compiled by László Tisza (1933), in connection to vibrational spectra. Robert Mulliken was the first to publish character tables in English (1933), and E. Bright Wilson used them in 1934 to predict the symmetry of vibrational normal modes.[17] The complete set of 32 crystallographic point groups was published in 1936 by Rosenthal and Murphy.[18]

As discussed above in the section Point groups and permutation-inversion groups, point groups are useful for classifying the vibrational and electronic states of rigid molecules (sometimes called semi-rigid molecules) which undergo only small oscillations about a single equilibrium geometry. Longuet-Higgins introduced a more general type of symmetry group[11] suitable not only for classifying the vibrational and electronic states of rigid molecules but also for classifying their rotational and nuclear spin states. Further, such groups can be used to classify the states of non-rigid (or fluxional) molecules that tunnel between equivalent geometries (called versions[19]) and to allow for the distorting effects of molecular rotation. These groups are known as permutation-inversion groups, because the symmetry operations in them are energetically feasible permutations of identical nuclei, or inversion with respect to the center of mass (the parity operation), or a combination of the two.

For example, ethane (C2H6) has three equivalent staggered conformations. Tunneling between the conformations occurs at ordinary temperatures by internal rotation of one methyl group relative to the other. This is not a rotation of the entire molecule about the C3 axis. Although each conformation has D3d symmetry, as in the table above, description of the internal rotation and associated quantum states and energy levels requires the more complete permutation-inversion group G36.[20]

Similarly, ammonia (NH3) has two equivalent pyramidal (C3v) conformations which are interconverted by the process known as nitrogen inversion. This is not the point group inversion operation i used for centrosymmetric rigid molecules (i.e., the inversion of vibrational displacements and electronic coordinates in the nuclear center of mass) since NH3 has no inversion center and is not centrosymmetric. Rather, it is the inversion of the nuclear and electronic coordinates in the molecular center of mass (sometimes called the parity operation), which happens to be energetically feasible for this molecule. The appropriate permutation-inversion group to be used in this situation is D3h(M)[21] which is isomorphic with the point group D3h.

Additionally, as examples, the methane (CH4) and H3+ molecules have highly symmetric equilibrium structures with Td and D3h point group symmetries respectively; they lack permanent electric dipole moments but they do have very weak pure rotation spectra because of rotational centrifugal distortion.[22][23] The permutation-inversion groups required for the complete study of CH4 and H3+ are Td(M)[24] and D3h(M), respectively.

In its ground (N) electronic state the ethylene molecule C2H4 has D2h point group symmetry whereas in the excited (V) state it has D2d symmetry. To treat these two states together it is necessary to allow torsion and to use the double group of the permutation-inversion group G16.[25]

A second and less general approach to the symmetry of nonrigid molecules is due to Altmann.[26][27] In this approach the symmetry groups are known as Schrödinger supergroups and consist of two types of operations (and their combinations): (1) the geometric symmetry operations (rotations, reflections, inversions) of rigid molecules, and (2) isodynamic operations, which take a nonrigid molecule into an energetically equivalent form by a physically reasonable process such as rotation about a single bond (as in ethane) or a molecular inversion (as in ammonia).[27]