During 1944, Walter Baade categorized groups of stars within the Milky Way into stellar populations. In the abstract of the article by Baade, he recognizes that Jan Oort originally conceived this type of classification in 1926:[1]

The two types of stellar populations had been recognized among the stars of our own galaxy by Oort as early as 1926.

Baade noticed that bluer stars were strongly associated with the spiral arms, and yellow stars dominated near the central galactic bulge and within globular star clusters.[2] Two main divisions were defined as

with another newer division called

they are often simply abbreviated as Pop. I, Pop. II, and Pop. III.

Among the population types, significant differences were found with their individual observed stellar spectra. These were later shown to be very important and were possibly related to star formation, observed kinematics,[3] stellar age, and even galaxy evolution in both spiral or elliptical galaxies. These three simple population classes usefully divided stars by their chemical composition or metallicity.[4][3]

Observation of stellar spectra has revealed that stars older than the Sun have fewer heavy elements compared to the Sun.[3] This immediately suggests that metallicity has evolved through the generations of stars by the process of stellar nucleosynthesis.

Formation of the first stars

Under current cosmological models, all matter created in the Big Bang was mostly hydrogen (75%) and helium (25%), with only a very tiny fraction consisting of other light elements such as lithium and beryllium.[7] When the universe had cooled sufficiently, the first stars were born as population III stars, without any contaminating heavier metals. This is postulated to have affected their structure so that their stellar masses became hundreds of times more than that of the Sun. In turn, these massive stars also evolved very quickly, and their nucleosynthetic processes created the first 26 elements (up to iron in the periodic table).[8]

Many theoretical stellar models show that most high-mass population III stars rapidly exhausted their fuel and likely exploded in extremely energetic pair-instability supernovae. Those explosions would have thoroughly dispersed their material, ejecting metals into the interstellar medium (ISM), to be incorporated into the later generations of stars. Their destruction suggests that no galactic high-mass population III stars should be observable.[9] However, some population III stars might be seen in high-redshift galaxies whose light originated during the earlier history of the universe.[10] Scientists have found evidence of an extremely small ultra metal-poor star, slightly smaller than the Sun, found in a binary system of the spiral arms in the Milky Way. The discovery opens up the possibility of observing even older stars.[11]

Stars too massive to produce pair-instability supernovae would have likely collapsed into black holes through a process known as photodisintegration. Here some matter may have escaped during this process in the form of relativistic jets, and this could have distributed the first metals into the universe.[12][13][lower-alpha 1]

Formation of the observable stars

The oldest observed stars,[9] known as population II, have very low metallicities;[15][5] as subsequent generations of stars were born, they became more metal-enriched, as the gaseous clouds from which they formed received the metal-rich dust manufactured by previous generations. As those stars died, they returned metal-enriched material to the interstellar medium via planetary nebulae and supernovae, enriching further the nebulae, out of which the newer stars formed. These youngest stars, including the Sun, therefore have the highest metal content, and are known as population I stars.

Population I, or metal-rich, stars are young stars with the highest metallicity out of all three populations and are more commonly found in the spiral arms of the Milky Way galaxy. The Sun is an example of a metal-rich star and is considered as an intermediate population I star, while the solar-like Mu Arae is much richer in metals.[16]

Population I stars usually have regular elliptical orbits of the galactic centre, with a low relative velocity. It was earlier hypothesized that the high metallicity of population I stars makes them more likely to possess planetary systems than the other two populations, because planets, particularly terrestrial planets, are thought to be formed by the accretion of metals.[17] However, observations of the Kepler Space Telescope data have found smaller planets around stars with a range of metallicities, while only larger, potential gas giant planets are concentrated around stars with relatively higher metallicity—a finding that has implications for theories of gas-giant formation.[18] Between the intermediate population I and the population II stars comes the intermediary disc population. 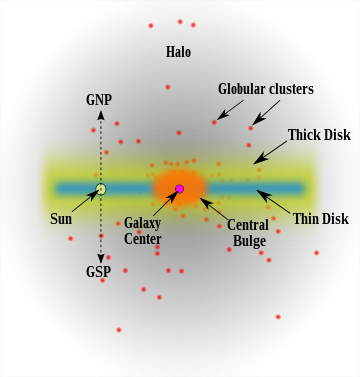 Schematic profile of the Milky Way. Population II stars appear in the galactic bulge and within the globular clusters

Population II, or metal-poor, stars are those with relatively little of the elements heavier than helium. These objects were formed during an earlier time of the universe. Intermediate population II stars are common in the bulge near the centre of the Milky Way, whereas population II stars found in the galactic halo are older and thus more metal-deficient. Globular clusters also contain high numbers of population II stars.[19]

A characteristic of population II stars is that despite their lower overall metallicity, they often have a higher ratio of "alpha elements" (elements produced by the alpha process, like O and Ne) relative to Fe as compared to population I stars; current theory suggests that this is the result of type II supernovas being more important contributors to the interstellar medium at the time of their formation, whereas type Ia supernova metal-enrichment came at a later stage in the universe's development.[20]

Scientists have targeted these oldest stars in several different surveys, including the HK objective-prism survey of Timothy C. Beers et al.[21] and the Hamburg-ESO survey of Norbert Christlieb et al.,[22] originally started for faint quasars. Thus far, they have uncovered and studied in detail about ten ultra-metal-poor (UMP) stars (such as Sneden's Star, Cayrel's Star, BD +17° 3248) and three of the oldest stars known to date: HE 0107-5240, HE 1327-2326 and HE 1523-0901. Caffau's star was identified as the most metal-poor star yet when it was found in 2012 using Sloan Digital Sky Survey data. However, in February 2014 the discovery of an even lower-metallicity star was announced, SMSS J031300.36-670839.3 located with the aid of SkyMapper astronomical survey data. Less extreme in their metal deficiency, but nearer and brighter and hence longer known, are HD 122563 (a red giant) and HD 140283 (a subgiant).

Population III stars[23] are a hypothetical population of extremely massive, luminous and hot stars with virtually no metals, except possibly for intermixing ejecta from other nearby population III supernovae. Such stars are likely to have existed in the very early universe (i.e., at high redshift) and may have started the production of chemical elements heavier than hydrogen, which are needed for the later formation of planets and life as we know it.[24][25]

The existence of population III stars is inferred from physical cosmology, but they have not yet been observed directly. Indirect evidence for their existence has been found in a gravitationally lensed galaxy in a very distant part of the universe.[26] Their existence may account for the fact that heavy elements – which could not have been created in the Big Bang – are observed in quasar emission spectra.[8] They are also thought to be components of faint blue galaxies. These stars likely triggered the universe's period of reionization, a major phase transition of the hydrogen gas composing most of the interstellar medium. Observations of the galaxy UDFy-38135539 suggest that it may have played a role in this reionization process. The European Southern Observatory discovered a bright pocket of early population stars in the very bright galaxy Cosmos Redshift 7 from the reionization period around 800 million years after the Big Bang, at z = 6.60. The rest of the galaxy has some later redder population II stars.[24][27] Some theories hold that there were two generations of population III stars.[28]

Artist's impression of the first stars, 400 million years after the Big Bang

Current theory is divided on whether the first stars were very massive or not. One possibility is that these stars were much larger than current stars: several hundred solar masses, and possibly up to 1,000 solar masses. Such stars would be very short lived and last only 2–5 million years.[29] Such large stars may have been possible due to the lack of heavy elements and a much warmer interstellar medium from the Big Bang. Conversely, theories proposed in 2009 and 2011 suggest that the first star groups might have consisted of a massive star surrounded by several smaller stars.[30][31][32] The smaller stars, if they remained in the birth cluster, would accumulate more gas and could not survive to the present day, but a 2017 study concluded that if a star of 0.8 solar masses (M☉) or less was ejected from its birth cluster before it accumulated more mass, it could survive to the present day, possibly even in our Milky Way galaxy.[33]

Analysis of data of extremely low-metallicity population II stars such as HE 0107-5240, which are thought to contain the metals produced by population III stars, suggest that these metal-free stars had masses of 20 to 130 solar masses.[34] On the other hand, analysis of globular clusters associated with elliptical galaxies suggests pair-instability supernovae, which are typically associated with very massive stars, were responsible for their metallic composition.[35] This also explains why there have been no low-mass stars with zero metallicity observed, although models have been constructed for smaller population III stars.[36] Clusters containing zero-metallicity red dwarfs or brown dwarfs (possibly created by pair-instability supernovae[15]) have been proposed as dark matter candidates,[37][38] but searches for these types of MACHOs through gravitational microlensing have produced negative results.