Short description: Accumulation of matter around a star

A circumstellar disc (or circumstellar disk) is a torus, pancake or ring-shaped accumulation of matter composed of gas, dust, planetesimals, asteroids, or collision fragments in orbit around a star. Around the youngest stars, they are the reservoirs of material out of which planets may form. Around mature stars, they indicate that planetesimal formation has taken place, and around white dwarfs, they indicate that planetary material survived the whole of stellar evolution. Such a disc can manifest itself in various ways.

According to the widely accepted model of star formation, sometimes referred to as the nebular hypothesis, a young star (protostar) is formed by the gravitational collapse of a pocket of matter within a giant molecular cloud. The infalling material possesses some amount of angular momentum, which results in the formation of a gaseous protoplanetary disc around the young, rotating star. The former is a rotating circumstellar disc of dense gas and dust that continues to feed the central star. It may contain a few percent of the mass of the central star, mainly in the form of gas which is itself mainly hydrogen. The main accretion phase lasts a few million years, with accretion rates typically between 10−7 and 10−9 solar masses per year (rates for typical systems presented in Hartmann et al.[2]).

The disc gradually cools in what is known as the T Tauri star stage. Within this disc, the formation of small dust grains made of rocks and ices can occur, and these can coagulate into planetesimals. If the disc is sufficiently massive, the runaway accretions begin, resulting in the appearance of planetary embryos. The formation of planetary systems is thought to be a natural result of star formation. A sun-like star usually takes around 100 million years to form.

Around the Solar System 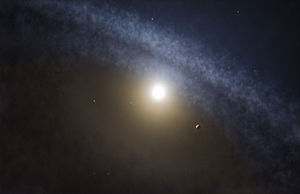 Artist's impression of a transitional disc around a young star.[3]

The circumbinary disk around AK Scorpii, a young system in the constellation Scorpius. The image of the disk was taken with ALMA.

Once a circumstellar disc has formed, spiral density waves are created within the circumstellar material via a differential torque due to the binary's gravity.[4] The majority of these discs form axissymmetric to the binary plane, but it is possible for processes such as the Bardeen-Petterson effect,[7] a misaligned dipole magnetic field[8] and radiation pressure[9] to produce a significant warp or tilt to an initially flat disc.

Strong evidence of tilted discs is seen in the systems Her X-1, SMC X-1, and SS 433 (among others), where a periodic line-of-sight blockage of X-ray emissions is seen on the order of 50–200 days; much slower than the systems' binary orbit of ~1 day.[10] The periodic blockage is believed to result from precession of a circumprimary or circumbinary disc, which normally occurs retrograde to the binary orbit as a result of the same differential torque which creates spiral density waves in an axissymmetric disc.

Evidence of tilted circumbinary discs can be seen through warped geometry within circumstellar discs, precession of protostellar jets, and inclined orbits of circumplanetary objects (as seen in the eclipsing binary TY CrA).[5] For discs orbiting a low secondary-to-primary mass ratio binary, a tilted circumbinary disc will undergo rigid precession with a period on the order of years. For discs around a binary with a mass ratio of one, differential torques will be strong enough to tear the interior of the disc apart into two or more separate, precessing discs.[5]

A study from 2020 using ALMA data showed that circumbinary disks around short period binaries are often aligned with the orbit of the binary. Binaries with a period longer than one month showed typically a misalignment of the disk with the binary orbit.[11]

Stages in circumstellar discs refer to the structure and the main composition of the disc at different times during its evolution. Stages include the phases when the disc is composed mainly of submicron-sized particles, the evolution of these particles into grains and larger objects, the agglomeration of larger objects into planetesimals, and the growth and orbital evolution of planetesimals into the planetary systems, like our Solar System or many other stars. 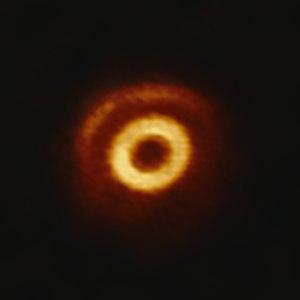 V1247 Orionis is a young, hot star surrounded by a dynamic ring of gas and dust.[16]

Dissipation process and its duration in each stage is not well understood. Several mechanisms, with different predictions for discs' observed properties, have been proposed to explain dispersion in circumstellar discs. Mechanisms like decreasing dust opacity due to grain growth,[19] photoevaporation of material by X-ray or UV photons from the central star (stellar wind),[20] or the dynamical influence of a giant planet forming within the disc[21] are some of the processes that have been proposed to explain dissipation.

Inner disc dissipation occurs at the inner part of the disc (< 0.05 – 0.1 AU). Since it is closest to the star, this region is also the hottest, thus material present there typically emits radiation in the near-infrared region of the electromagnetic spectrum. Study of the radiation emitted by the very hot dust present in that part of the disc indicates that there is an empirical connection between accretion from a disc onto the star and ejections in an outflow.

Mid-disc dissipation, occurs at the mid-disc region (1-5 AU) and is characterized for the presence of much more cooler material than in the inner part of the disc. Consequently, radiation emitted from this region has greater wavelength, indeed in the mid-infrared region, which makes it very difficult to detect and to predict the timescale of this region's dissipation. Studies made to determine the dissipation timescale in this region provide a wide range of values, predicting timescales from less than 10 up to 100 Myr.

Outer disc dissipation occurs in regions between 50 – 100 AU, where temperatures are much lower and emitted radiation wavelength increases to the millimeter region of the electromagnetic spectrum. Mean dust masses for this region has been reported to be ~ 10−5 solar masses.[23] Studies of older debris discs (107 - 109 yr) suggest dust masses as low as 10−8 solar masses, implying that diffusion in outer discs occurs on a very long timescale.[24]