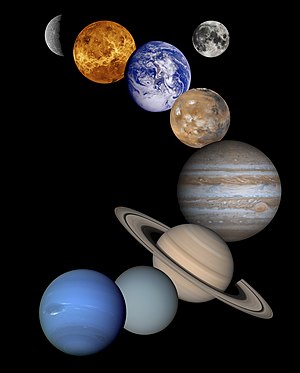 From top to bottom: Mercury, Venus without its atmosphere, Earth and the Moon, Mars, Jupiter, Saturn, Uranus, and Neptune (not to scale)

The following is a list of planet types by their mass, orbit, physical and chemical composition, or by another classification.

The IAU defines that a planet in the Solar System must orbit around the Sun, has enough mass to assume hydrostatic equilibrium, and has "cleared its neighborhood". There is currently no accepted definition for exoplanets.

Artist's impression of COROT-7b (in foreground), likely a lava exoplanet