Short description: A binary system where two planetary-mass objects share an orbital axis external to both

In astronomy, a double planet (also binary planet) is a binary satellite system where both objects are planets, or planetary-mass objects, that share an orbital axis external to both planetary bodies.

Although up to a third of the star systems in the Milky Way are binary,[1] double planets are expected to be much rarer given the typical planet to satellite mass ratio is around 1:10000, they are influenced heavily by the gravitational pull of the parent star[2] and according to the Giant-impact hypothesis and are gravitationally stable only under particular circumstances.

Binary asteroids with components of roughly equal mass are sometimes referred to as double minor planets. These include binary asteroids 69230 Hermes and 90 Antiope and binary Kuiper belt objects (KBOs) 79360 Sila–Nunam and 1998 WW31.

The Pluto–Charon system is closer to binary than the Earth–Moon system (distance not to scale). 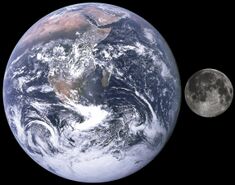 The Earth–Moon system is sometimes informally referred to as a double planet (masses are roughly proportional to volumes, not surface area).[3]

There is debate as to what criteria should be used to distinguish "double planet" from a "planet–moon system". The following are considerations.

At its 2006 General Assembly, the International Astronomical Union considered a proposal that Pluto and Charon be reclassified as a double planet,[4] but the proposal was abandoned in favor of the current IAU definition of planet. In promotional materials advertising the SMART-1 mission, the European Space Agency referred to the Earth–Moon system as a double planet.[3]

A definition proposed in the Astronomical Journal calls for both bodies to individually satisfy an orbit-clearing criterion in order to be called a double planet.[5]

One important consideration in defining "double planet" is the ratio of the masses of the two bodies. A mass ratio of 1 would indicate bodies of equal mass, and bodies with mass ratios closer to 1 are more attractive to label as "doubles". Using this definition, the satellites of Mars, Jupiter, Saturn, Uranus, and Neptune can all easily be excluded; they all have masses less than 0.00025 (​1⁄4000) of the planets around which they revolve. Some dwarf planets, too, have satellites substantially less massive than the dwarf planets themselves.

The most notable exception is the Pluto–Charon system. The Charon-to-Pluto mass ratio of 0.122 (≈ ​1⁄8) is close enough to 1 that Pluto and Charon have frequently been described by many scientists as "double dwarf planets" ("double planets" prior to the 2006 definition of "planet"). The International Astronomical Union (IAU) earlier classified Charon as a satellite of Pluto, but had also explicitly expressed the willingness to reconsider the bodies as double-dwarf planets in the future.[6] But a report[7] in 2006 classified Charon-Pluto as a double planet.

The Moon-to-Earth mass ratio of 0.01230 (≈ ​1⁄81) is also notably close to 1 when compared to all other satellite-to-planet ratios. Consequently, some scientists view the Earth-Moon system as a double planet as well, though this is a minority view. Eris's lone satellite, Dysnomia, has a radius somewhere around ​1⁄4 that of Eris; assuming similar densities (Dysnomia's compositional make-up may or may not differ substantially from Eris's), the mass ratio would be near ​1⁄40, a value intermediate to the Moon–Earth and Charon–Pluto ratios.

The next criteria both attempt to answer the question "How close to 1 must the mass ratio be?"

Pluto–Charon system: the barycenter lies outside of Pluto.

Currently, the most commonly proposed definition for a double-planet system is one in which the barycenter, around which both bodies orbit, lies outside both bodies. Under this definition, Pluto and Charon are double dwarf planets, since they orbit a point clearly outside of Pluto, as visible in animations created from images of the New Horizons space probe in June 2015.

Under this definition, the Earth–Moon system is not currently a double planet; although the Moon is massive enough to cause the Earth to make a noticeable revolution around this center of mass, this point nevertheless lies well within Earth. However, the Moon currently migrates outward from Earth at a rate of approximately 3.8 cm (1.5 in) per year; in a few billion years, the Earth–Moon system's center of mass will lie outside Earth, which would make it a double-planet system.

The center of mass of the Jupiter–Sun system lies outside the surface of the Sun, though arguing that Jupiter and the Sun are a double star is not analogous to arguing Pluto-Charon is a double dwarf planet. Jupiter is too light to be a fusor; were it thirteen times heavier, it would achieve deuterium fusion and become a brown dwarf.[8]

Asimov calculated tug-of-war values for several satellites of the planets. He showed that even the largest gas giant, Jupiter, had only a slightly better hold than the Sun on its outer captured satellites, some with tug-of-war values not much higher than one. In nearly every one of Asimov's calculations the tug-of-war value was found to be greater than one, so in those cases the Sun loses the tug-of-war with the planets. The one exception was Earth's Moon, where the Sun wins the tug-of-war with a value of 0.46, which means that Earth's hold on the Moon is less than half that of the Sun's. Asimov included this with his other arguments that Earth and the Moon should be considered a binary planet.[9]

We might look upon the Moon, then, as neither a true satellite of the Earth nor a captured one, but as a planet in its own right, moving about the Sun in careful step with the Earth. From within the Earth–Moon system, the simplest way of picturing the situation is to have the Moon revolve about the Earth; but if you were to draw a picture of the orbits of the Earth and Moon about the Sun exactly to scale, you would see that the Moon's orbit is everywhere concave toward the Sun. It is always "falling toward" the Sun. All the other satellites, without exception, "fall away" from the Sun through part of their orbits, caught as they are by the superior pull of their primary planets – but not the Moon.[9][10][Footnote 1]
— Isaac Asimov

See the Path of Earth and Moon around Sun section in the "Orbit of the Moon" article for a more detailed explanation.

This definition of double planet depends on the pair's distance from the Sun. If the Earth–Moon system happened to orbit farther away from the Sun than it does now, then Earth would win the tug of war. For example, at the orbit of Mars, the Moon's tug-of-war value would be 1.05. Also, several tiny moons discovered since Asimov's proposal would qualify as double planets by this argument. Neptune's small outer moons Neso and Psamathe, for example, have tug-of-war values of 0.42 and 0.44, less than that of Earth's Moon. Yet their masses are tiny compared to Neptune's, with an estimated ratio of 1.5×10−9 (​1⁄700,000,000) and 0.4×10−9 (​1⁄2,500,000,000).

Formation of the system

A final consideration is the way in which the two bodies came to form a system. Both the Earth-Moon and Pluto-Charon systems are thought to have been formed as a result of giant impacts: one body was impacted by a second body, resulting in a debris disk, and through accretion, either two new bodies formed or one new body formed, with the larger body remaining (but changed). However, a giant impact is not a sufficient condition for two bodies being "double planets" because such impacts can also produce tiny satellites, such as the four small outer satellites of Pluto.

A now-abandoned hypothesis for the origin of the Moon was actually called the "double-planet hypothesis"; the idea was that the Earth and the Moon formed in the same region of the Solar System's proto-planetary disk, forming a system under gravitational interaction. This idea, too, is a problematic condition for defining two bodies as "double planets" because planets can "capture" moons through gravitational interaction. For example, the moons of Mars (Phobos and Deimos) are thought to be asteroids captured long ago by Mars. Such a definition would also deem Neptune-Triton a double planet, since Triton was a Kuiper belt body the same size and of similar composition to Pluto, later captured by Neptune.