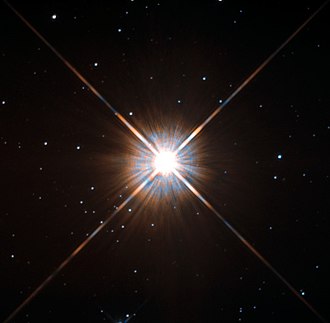 A red dwarf is the smallest and coolest kind of star on the main sequence. Red dwarfs are by far the most common type of star in the Milky Way, at least in the neighborhood of the Sun, but because of their low luminosity, individual red dwarfs cannot be easily observed. From Earth, not one star that fits the stricter definitions of a red dwarf is visible to the naked eye.[1] Proxima Centauri, the nearest star to the Sun, is a red dwarf, as are fifty of the sixty nearest stars. According to some estimates, red dwarfs make up three-quarters of the stars in the Milky Way.[2]

The coolest red dwarfs near the Sun have a surface temperature of ~2,000 K and the smallest have radii of ~9% that of the Sun, with masses about ~7.5% that of the Sun. These red dwarfs have spectral classes of L0 to L2. There is some overlap with the properties of brown dwarfs, since the most massive brown dwarfs at lower metallicity can be as hot as 3,600 K and have late M spectral types.

Definitions and usage of the term "red dwarf" vary on how inclusive they are on the hotter and more massive end. One definition is synonymous with stellar M dwarfs (M-type main sequence stars), yielding a maximum temperature of 3,900 K and 0.6 M☉. One includes all stellar M-type main-sequence and all K-type main-sequence stars (K dwarf), yielding a maximum temperature of 5,200 K and 0.8 M☉. Some definitions include any stellar M dwarf and part of the K dwarf classification. Other definitions are also in use (see definition). Many of the coolest, lowest mass M dwarfs are expected to be brown dwarfs, not true stars, and so those would be excluded from any definition of red dwarf.

Stellar models indicate that red dwarfs less than 0.35 M☉ are fully convective.[3] Hence, the helium produced by the thermonuclear fusion of hydrogen is constantly remixed throughout the star, avoiding helium buildup at the core, thereby prolonging the period of fusion. Low-mass red dwarfs therefore develop very slowly, maintaining a constant luminosity and spectral type for trillions of years, until their fuel is depleted. Because of the comparatively short age of the universe, no red dwarfs yet exist at advanced stages of evolution.

The term "red dwarf" when used to refer to a star does not have a strict definition. One of the earliest uses of the term was in 1915, used simply to contrast "red" dwarf stars from hotter "blue" dwarf stars.[4] It became established use, although the definition remained vague.[5] In terms of which spectral types qualify as red dwarfs, different researchers picked different limits, for example K8–M5[6] or "later than K5".[7] Dwarf M star, abbreviated dM, was also used, but sometimes it also included stars of spectral type K.[8]

In modern usage, the definition of a red dwarf still varies. When explicitly defined, it typically includes late K- and early to mid-M-class stars,[9] but in many cases it is restricted just to M-class stars.[10][11] In some cases all K stars are included as red dwarfs,[12] and occasionally even earlier stars.[13]

The most recent surveys place the coolest true main-sequence stars into spectral types L2 or L3. At the same time, many objects cooler than about M6 or M7 are brown dwarfs, insufficiently massive to sustain hydrogen-1 fusion.[14] This gives a significant overlap in spectral types for red and brown dwarfs. Objects in that spectral range can be difficult to categorize.

Red dwarfs are very-low-mass stars.[15] As a result, they have relatively low pressures, a low fusion rate, and hence, a low temperature. The energy generated is the product of nuclear fusion of hydrogen into helium by way of the proton–proton (PP) chain mechanism. Hence, these stars emit relatively little light, sometimes as little as ​1⁄10,000 that of the Sun, although this would still imply a power output on the order of 1022 watts (10 trillion gigawatts or 10 ZW). Even the largest red dwarfs (for example HD 179930, HIP 12961 and Lacaille 8760) have only about 10% of the Sun's luminosity.[16] In general, red dwarfs less than 0.35 M☉ transport energy from the core to the surface by convection. Convection occurs because of opacity of the interior, which has a high density compared to the temperature. As a result, energy transfer by radiation is decreased, and instead convection is the main form of energy transport to the surface of the star. Above this mass, a red dwarf will have a region around its core where convection does not occur.[17] 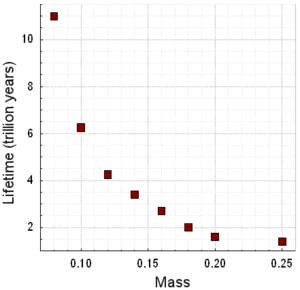 The predicted main-sequence lifetime of a red dwarf plotted against its mass relative to the Sun.[18]

Because low-mass red dwarfs are fully convective, helium does not accumulate at the core, and compared to larger stars such as the Sun, they can burn a larger proportion of their hydrogen before leaving the main sequence. As a result, red dwarfs have estimated lifespans far longer than the present age of the universe, and stars less than 0.8 M☉ have not had time to leave the main sequence. The lower the mass of a red dwarf, the longer the lifespan. It is believed that the lifespan of these stars exceeds the expected 10-billion-year lifespan of our Sun by the third or fourth power of the ratio of the solar mass to their masses; thus, a 0.1 M☉ red dwarf may continue burning for 10 trillion years.[15][19] As the proportion of hydrogen in a red dwarf is consumed, the rate of fusion declines and the core starts to contract. The gravitational energy released by this size reduction is converted into heat, which is carried throughout the star by convection.[20]

According to computer simulations, the minimum mass a red dwarf must have to eventually evolve into a red giant is 0.25 M☉; less massive objects, as they age, would increase their surface temperatures and luminosities becoming blue dwarfs and finally white dwarfs.[18]

The less massive the star, the longer this evolutionary process takes. It has been calculated that a 0.16 M☉ red dwarf (approximately the mass of the nearby Barnard's Star) would stay on the main sequence for 2.5 trillion years, followed by five billion years as a blue dwarf, during which the star would have one third of the Sun's luminosity (L☉) and a surface temperature of 6,500–8,500 kelvins.[18]

All observed red dwarfs contain "metals", which in astronomy are elements heavier than hydrogen and helium. The Big Bang model predicts that the first generation of stars should have only hydrogen, helium, and trace amounts of lithium, and hence would be of low metallicity. With their extreme lifespans, any red dwarfs that were a part of that first generation (population III stars) should still exist today. Low-metallicity red dwarfs, however, are rare. The accepted model for the chemical evolution of the universe anticipates such a scarcity of metal-poor dwarf stars because only giant stars are thought to have formed in the metal-poor environment of the early universe. As giant stars end their short lives in supernova explosions, they spew out the heavier elements needed to form smaller stars. Therefore, dwarfs became more common as the universe aged and became enriched in metals. While the basic scarcity of ancient metal-poor red dwarfs is expected, observations have detected even fewer than predicted. The sheer difficulty of detecting objects as dim as red dwarfs was thought to account for this discrepancy, but improved detection methods have only confirmed the discrepancy.[24]

The spectral standards for M type stars have changed slightly over the years, but settled down somewhat since the early 1990s. Part of this is due to the fact that even the nearest red dwarfs are fairly faint, and their colors do not register well on photographic emulsions used in the early to mid 20th century. The study of mid- to late-M dwarfs has significantly advanced only in the past few decades, primarily due to development of new astrographic and spectroscopic techniques, dispensing with photographic plates and progressing to charged-couple devices (CCDs) and infrared-sensitive arrays. 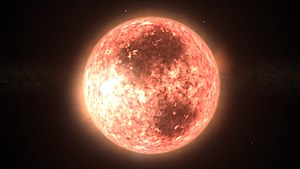 Many red dwarfs are orbited by exoplanets, but large Jupiter-sized planets are comparatively rare. Doppler surveys of a wide variety of stars indicate about 1 in 6 stars with twice the mass of the Sun are orbited by one or more of Jupiter-sized planets, versus 1 in 16 for Sun-like stars and the frequency of close-in giant planets (Jupiter size or larger) orbiting red dwarfs is only 1 in 40.[34] On the other hand, microlensing surveys indicate that long-orbital-period Neptune-mass planets are found around one in three red dwarfs.[35] Observations with HARPS further indicate 40% of red dwarfs have a "super-Earth" class planet orbiting in the habitable zone where liquid water can exist on the surface.[36] Computer simulations of the formation of planets around low-mass stars predict that Earth-sized planets are most abundant, but more than 90% of the simulated planets are at least 10% water by mass, suggesting that many Earth-sized planets orbiting red dwarf stars are covered in deep oceans.[37]

Gliese 581c and d are within the habitable zone of the host star, and are two of the most likely candidates for habitability of any exoplanets discovered so far.[38] Gliese 581g, detected September 2010,[39] has a near-circular orbit in the middle of the star's habitable zone. However, the planet's existence is contested.[40]

On 23 February 2017 NASA announced the discovery of seven Earth-sized planets orbiting the red dwarf star TRAPPIST-1 approximately 39 light-years away in the constellation Aquarius. The planets were discovered through the transit method, meaning we have mass and radius information for all of them. TRAPPIST-1e, f, and g appear to be within the habitable zone and may have liquid water on the surface.[41] 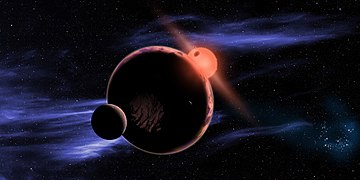 An artist's impression of a planet with two exomoons orbiting in the habitable zone of a red dwarf.

Modern evidence suggests that planets in red dwarf systems are extremely unlikely to be habitable. In spite of their great numbers and long lifespans, there are several factors which may make life difficult on planets around a red dwarf. First, planets in the habitable zone of a red dwarf would be so close to the parent star that they would likely be tidally locked. This would mean that one side would be in perpetual daylight and the other in eternal night. This could create enormous temperature variations from one side of the planet to the other. Such conditions would appear to make it difficult for forms of life similar to those on Earth to evolve. And it appears there is a great problem with the atmosphere of such tidally locked planets: the perpetual night zone would be cold enough to freeze the main gases of their atmospheres, leaving the daylight zone bare and dry. On the other hand though, a theory proposes that either a thick atmosphere or planetary ocean could potentially circulate heat around such a planet.[42]

Variability in stellar energy output may also have negative impacts on the development of life. Red dwarfs are often flare stars, which can emit gigantic flares, doubling their brightness in minutes. This variability makes it difficult for life to develop and persist near a red dwarf.[43] While it may be possible for a planet orbiting close to a red dwarf to keep its atmosphere even if the star flares, more-recent research suggests that these stars may be the source of constant high-energy flares and very large magnetic fields, diminishing the possibility of life as we know it.[44][45]