General structure of carbodiimides: The core functional group is shown in blue with attached R groups

Side-on view of the C(NC3)2 core of C(NCHPh2)2 as determined by X-ray crystallography.[4]

The N=C=N core is relatively linear and the C-N=C angles approach 120°. In the case of C(NCHPh2)2, the central N=C=N angle is 170° and the C-N=C angles are within 1° of 126°.[4] The C=N distances are short, nearly 120 pm, as is characteristic of double bonds. Carbodiimides are chiral, possessing C2-symmetry and therefore axial chirality.[5] However, due to the low energy barrier to the molecule rotating and thereby converting quickly between its isomers, the actual isolation of one optical isomer of a carbodiimide is extremely difficult. It has been demonstrated at least once, in the case of conformationally restricted cyclic carbodiimides; though there are other reports of one-handed axially chiral carbodiimides, their validity has since been called into question on experimental and computational grounds.[6][7]

The parent compound, methanediimine, (HN=C=NH), is a tautomer of cyanamide.

A classic route to carbodiimides involves dehydrosulfurization of thioureas. A typical reagent for this process is mercuric oxide:[8]

This reaction can often be conducted as stated, even though carbodiimides react with water. In some cases, a dehydrating agent is added to the reaction mixture.

Phosphorus pentoxide[9] and p-Toluenesulfonyl chloride have been used as a dehydrating agents.[10][11]

Isocyanates can be converted to carbodiimides with loss of carbon dioxide:[12][3]

Compared to other heteroallenes, carbodiimides are very weak electrophiles and only react with nucleophiles in the presence of catalysts, such as acids.[13] In this way, guanidines can be prepared.[2] As weak bases, carbodiimides bind to Lewis acids to give adducts.[8]

Carbodiimides are reagents for the Moffatt oxidation, a protocol for conversion of an alcohol to a carbonyl (ketone or aldehyde) using dimethyl sulfoxide as the oxidizing agent:[14]

Typically the sulfoxide and diimide are used in excess.[15] The reaction generates dimethyl sulfide and a urea as byproducts.

In organic synthesis, compounds containing the carbodiimide functionality are used as dehydration agents. Specifically they are often used to convert carboxylic acids to amides or esters. Additives, such as N-hydroxybenzotriazole or N-hydroxysuccinimide, are often added to increase yields and decrease side reactions.

Polycarbodiimides can also be used as crosslinkers for aqueous resins, such as polyurethane dispersions or acrylic dispersion. Here the polycarbodiimide reacts with carboxylic acids, whose functional groups are often present in such aqueous resins, to form N-acyl urea. The result is the formation of covalent bonds between the polymer chains, making them crosslinked.[16][17]

The formation of an amide using a carbodiimide is a common reaction, but carries the risk of several side reactions. The acid 1 will react with the carbodiimide to produce the key intermediate: the O-acylisourea 2, which can be viewed as a carboxylic ester with an activated leaving group. The O-acylisourea will react with amines to give the desired amide 3 and urea 4. 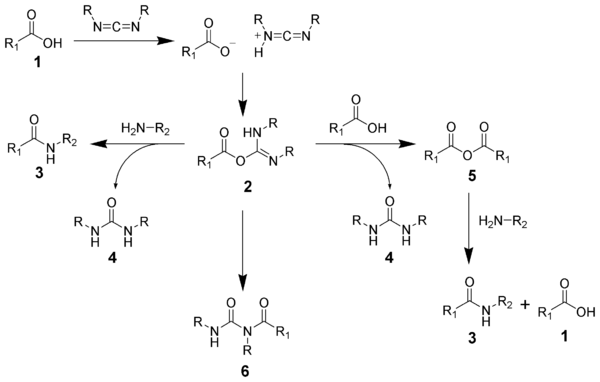 DCC (acronym for N,N'-dicyclohexylcarbodiimide) was one of the first carbodiimides developed as a reagent. It is widely used for amide and ester formation, especially for solid-phase synthesis of peptides. DCC has achieved popularity mainly because of its high-yielding amide coupling reactions and the fact that it is quite inexpensive.

However, DCC does have some serious drawbacks, and its use is often avoided for several reasons:

EDC is a water-soluble carbodiimide reagent used for a wide range of purposes. Apart from uses similar to those of DCC and DIC, it is also used for various biochemical purposes as a crosslinker or chemical probe.

1-cyclohexyl-(2-morpholinoethyl)carbodiimide metho-p-toluene sulfonate is a carbodiimide developed for the chemical probing of RNA structure in biochemistry.