A 3D projection of a 5-cell performing a simple rotation 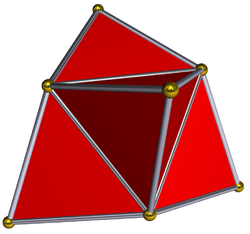 Net of five tetrahedra (one hidden)

In geometry, the 5-cell is the convex 4-polytope with Schläfli symbol {3,3,3}. It is a 5-vertex four-dimensional object bounded by five tetrahedral cells.[lower-alpha 1] It is also known as a C5, pentachoron,[1] pentatope, pentahedroid,[2] or tetrahedral pyramid. It is the 4-simplex (Coxeter's [math]\displaystyle{ \alpha_4 }[/math] polytope),[3] the simplest possible convex 4-polytope, and is analogous to the tetrahedron in three dimensions and the triangle in two dimensions. The 5-cell is a 4-dimensional pyramid with a tetrahedral base and four tetrahedral sides.

The regular 5-cell is bounded by five regular tetrahedra, and is one of the six regular convex 4-polytopes (the four-dimensional analogues of the Platonic solids). A regular 5-cell can be constructed from a regular tetrahedron by adding a fifth vertex one edge length distant from all the vertices of the tetrahedron. This cannot be done in 3-dimensional space. The regular 5-cell is a solution to the problem: Make 10 equilateral triangles, all of the same size, using 10 matchsticks, where each side of every triangle is exactly one matchstick, and none of the triangles and match sticks intersect one another. No solution exists in three dimensions.

The 5-cell is the 4-dimensional simplex, the simplest possible 4-polytope. As such it is the first in the sequence of 6 convex regular 4-polytopes (in order of size and complexity).[lower-alpha 2]

When a net of five tetrahedra is folded up in 4-dimensional space such that each tetrahedron is face bonded to the other four, the resulting 5-cell has a total of 5 vertices, 10 edges and 10 faces. Four edges meet at each vertex, and three tetrahedral cells meet at each edge.

The 5-cell is self-dual (as are all simplexes), and its vertex figure is the tetrahedron. Its maximal intersection with 3-dimensional space is the triangular prism. Its dihedral angle is cos−1(1/4), or approximately 75.52°.

The convex hull of two 5-cells in dual configuration is the disphenoidal 30-cell, dual of the bitruncated 5-cell.

This configuration matrix represents the 5-cell. The rows and columns correspond to vertices, edges, faces, and cells. The diagonal numbers say how many of each element occur in the whole 5-cell. The nondiagonal numbers say how many of the column's element occur in or at the row's element. This self-dual polytope's matrix is identical to its 180 degree rotation.[7]

The Cartesian coordinates of the vertices of an origin-centered regular 5-cell having edge length 2 and radius √1.6 are:

Another set of origin-centered coordinates in 4-space can be seen as a hyperpyramid with a regular tetrahedral base in 3-space, with edge length 2√2 and radius √3.2:

A 5-cell can be constructed as a Boerdijk–Coxeter helix of five chained tetrahedra, folded into a 4-dimensional ring. The 10 triangle faces can be seen in a 2D net within a triangular tiling, with 6 triangles around every vertex, although folding into 4-dimensions causes edges to coincide. The purple edges represent the Petrie polygon of the 5-cell. 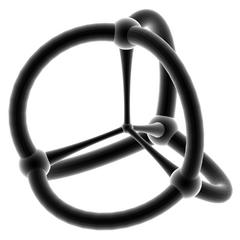 In the case of simplexes such as the 5-cell, certain irregular forms are in some sense more fundamental than the regular form. Although regular 5-cells cannot fill 4-space or the regular 4-polytopes, there are irregular 5-cells which do. These characteristic 5-cells are the fundamental domains of the different symmetry groups which give rise to the various 4-polytopes.

A 3-cube dissected into six 3-orthoschemes. Three are left-handed and three are right handed. A left and a right meet at each square face.

A 3-orthoscheme is easily illustrated, but a 4-orthoscheme is more difficult to visualize. A 4-orthoscheme is a tetrahedral pyramid with a 3-orthoscheme as its base. It has four more edges than the 3-orthoscheme, joining the four vertices of the base to its apex (the fifth vertex of the 5-cell). Pick out any one of the 3-orthoschemes of the six shown in the 3-cube illustration. Notice that it touches four of the cube's eight vertices, and those four vertices are linked by a 3-edge path that makes two right-angled turns. Imagine that this 3-orthoscheme is the base of a 4-orthoscheme, so that from each of those four vertices, an unseen 4-orthoscheme edge connects to a fifth apex vertex (which is outside the 3-cube and does not appear in the illustration at all). Although the four additional edges all reach the same apex vertex, they will all be of different lengths. The first of them, at one end of the 3-edge orthogonal path, extends that path with a fourth orthogonal √1 edge by making a third 90 degree turn and reaching perpendicularly into the fourth dimension to the apex. The second of the four additional edges is a √2 diagonal of a cube face (not of the illustrated 3-cube, but of another of the tesseract's eight 3-cubes).[lower-alpha 4] The third additional edge is a √3 diagonal of a 3-cube (again, not the original illustrated 3-cube). The fourth additional edge (at the other end of the orthogonal path) is a long diameter of the tesseract itself, of length √4. It reaches through the exact center of the tesseract to the antipodal vertex (a vertex of the opposing 3-cube), which is the apex. Thus the characteristic 5-cell of the 4-cube has four √1 edges, three √2 edges, two √3 edges, and one √4 edge.

can be dissected into 24 such 4-orthoschemes

eight different ways, with six 4-orthoschemes surrounding each of four orthogonal √4 tesseract long diameters. The 4-cube can also be dissected into 384 smaller instances of this same characteristic 4-orthoscheme, just one way, by all of its symmetry hyperplanes at once, which divide it into 384 4-orthoschemes that all meet at the center of the 4-cube.[lower-alpha 5]

More generally, any regular polytope can be dissected into g instances of its characteristic orthoscheme that all meet at the regular polytope's center. The number g is the order of the polytope, the number of reflected instances of its characteristic orthoscheme that comprise the polytope when a single mirror-surfaced orthoscheme instance is reflected in its own facets.[lower-alpha 6] More generally still, characteristic simplexes are able to fill uniform polytopes because they possess all the requisite elements of the polytope. They also possess all the requisite angles between elements (from 90 degrees on down). The characteristic simplexes are the genetic codes of polytopes: like a Swiss Army knife, they contain one of everything needed to construct the polytope by replication.

can be dissected into 120 instances of this characteristic 4-orthoscheme

There are many lower symmetry forms of the 5-cell, including these found as uniform polytope vertex figures:

Other uniform 5-polytopes have irregular 5-cell vertex figures. The symmetry of a vertex figure of a uniform polytope is represented by removing the ringed nodes of the Coxeter diagram.

The compound of two 5-cells in dual configurations can be seen in this A5 Coxeter plane projection, with a red and blue 5-cell vertices and edges. This compound has 3,3,3 symmetry, order 240. The intersection of these two 5-cells is a uniform bitruncated 5-cell. 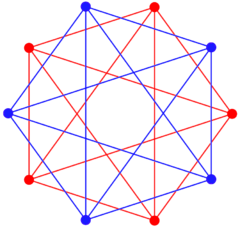 This compound can be seen as the 4D analogue of the 2D hexagram {6/2} and the 3D compound of two tetrahedra.

The pentachoron (5-cell) is the simplest of 9 uniform polychora constructed from the [3,3,3] Coxeter group.