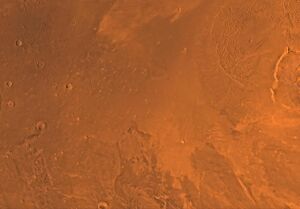 Image of the Amazonis Quadrangle (MC-8). The central part contains Amazonis Planitia and the eastern part includes the western flank of the largest known volcano in the Solar System, Olympus Mons.

The Amazonis quadrangle is of great interest to scientists because it contains a big part of a formation, called the Medusae Fossae Formation. It is a soft, easily eroded deposit that extends for nearly 1,000 km along the equator of Mars. The surface of the formation has been eroded by the wind into a series of linear ridges called yardangs. These ridges generally point in direction of the prevailing winds that carved them and demonstrate the erosive power of Martian winds. The easily eroded nature of the Medusae Fossae Formation suggests that it is composed of weakly cemented particles,[2] and was most likely formed by the deposition of wind-blown dust or volcanic ash. Using a global climate model, a group of researchers headed by Laura Kerber found that the Medusae Fossae Formation could have easily been formed from ash from the volcanoes Apollinaris Mons, Arsia Mons, and possibly Pavonis Mons.[3] Another evidence for a fine-grained composition is that the area gives almost no radar return. For this reason it has been called a "stealth" region.[4] Layers are seen in parts of the formation. Images from spacecraft show that they have different degrees of hardness probably because of significant variations in the physical properties, composition, particle size, and/or cementation. Very few impact craters are visible throughout the area so the surface is relatively young.[5] Researchers found that nearly all the dust in that coats everything and is in the atmosphere has its origin in the Medusae Fossae formation.[6] It turns out that the chemical elements (sulfur and chlorine) in this formation, in the atmosphere, and covering the surface are the same. The amount of dust on Mars is sufficient to form a 2 to 12 meters thick layer over the entire planet.[7][8] Since there are relatively few depositional features in the Medusae Fossae Formation, most of the materials being eroded are probably small enough to be suspended in the atmosphere and transported long distances.[9]

An analysis of data from the 2001 Mars Odyssey Neutron Spectrometer revealed that parts of the Medusae Fossae Formation contain water.[10]

A very rugged terrain extends from the base of Olympus Mons. It is called Lycus Sulci. Sulci is a Latin term for the furrows on the surface of a brain, so Lycus Sulci has many furrows or grooves. The furrows are huge—up to a full kilometer deep.[11] It would be extremely difficult to walk across it or to land a space ship there. A picture of this area is shown below.

Lava flows sometimes cool to form large groups of more-or-less equally sized columns.[12] The resolution of the HiRISE images is such that the columns were found in various locations in 2009.

Impact craters generally have a rim with ejecta around them, in contrast volcanic craters usually do not have a rim or ejecta deposits. As craters get larger (greater than 10 km in diameter) they usually have a central peak.[13] The peak is caused by a rebound of the crater floor following the impact.[14] Sometimes craters will display layers. Since the collision that produces a crater is like a powerful explosion, rocks from deep underground are tossed onto the surface. Hence, craters can show us what lies deep under the surface.

A pedestal crater is a crater with its ejecta sitting above the surrounding terrain and thereby forming a raised platform. They form when an impact crater ejects material which forms an erosion resistant layer, thus protecting the immediate area from erosion. As a result of this hard covering, the crater and its ejecta become elevated, as erosion removes the softer material beyond the ejecta. Some pedestals have been accurately measured to be hundreds of meters above the surrounding area. This means that hundreds of meters of material were eroded away. Pedestal craters were first observed during the Mariner missions.[16][17][18]

Research published in the journal Icarus has found pits in Tooting Crater that are caused by hot ejecta falling on ground containing ice. The pits are formed by heat forming steam that rushes out from groups of pits simultaneously, thereby blowing away from the pit ejecta.[19][20]

Linear ridge networks are found in various places on Mars in and around craters.[21] Ridges often appear as mostly straight segments that intersect in a lattice-like manner. They are hundreds of meters long, tens of meters high, and several meters wide. It is thought that impacts created fractures in the surface, these fractures later acted as channels for fluids. Fluids cemented the structures. With the passage of time, surrounding material was eroded away, thereby leaving hard ridges behind. Since the ridges occur in locations with clay, these formations could serve as a marker for clay which requires water for its formation.[22][23][24] Water here could have supported past life in these locations. Clay may also preserve fossils or other traces of past life.

Dark slope streaks are narrow, avalanche-like features common on dust-covered slopes in the equatorial regions of Mars.[25] They form in relatively steep terrain, such as along escarpments and crater walls.[26] Although first recognized in Viking Orbiter images from the late 1970s,[27][28] dark slope streaks were not studied in detail until higher-resolution images from the Mars Global Surveyor (MGS) and Mars Reconnaissance Orbiter (MRO) spacecraft became available in the late 1990s and 2000s.[29][30]

The physical process that produces dark slope streaks is still uncertain. They are most likely caused by the mass movement of loose, fine-grained material on oversteepened slopes (i.e., dust avalanches).[31][32] The avalanching disturbs and removes a bright surface layer of dust to expose a darker substrate.[33]

The crater cluster lies near the equator 510 miles) south of Olympus Mons, on a type of terrain called the Medusae Fossae formation. The formation is coated with dust and contains wind-carved ridges called yardangs. These yardangs have steep slopes thickly covered with dust, so when the sonic boom of the airblast arrived from the impacts dust started to move down the slope. Using photos from Mars Global Surveyor and HiRISE camera on NASA's Mars Reconnaissance Orbiter, scientists have found about 20 new impacts each year on Mars. Because the spacecraft have been imaging Mars almost continuously for a span of 14 years, newer images with suspected recent craters can be compared to older images to determine when the craters were formed. Since the craters were spotted in a HiRISE image from February 2006, but were not present in a Mars Global Surveyor image taken in May 2004, the impact occurred in that time frame.

The largest crater in the cluster is about 22 meters (72 feet) in diameter with close to the area of a basketball court. As the meteorite traveled through the Martian atmosphere it probably broke up; hence a tight group of impact craters resulted. Dark slope streaks have been seen for some time, and many ideas have been advanced to explain them. This research may have finally solved this mystery.[34][35][36]

When a fluid moves by a feature like a mound, it will become streamlined. Often flowing water makes the shape and later lava flows spread over the region. In the pictures below this has occurred.

Many places on Mars show rocks arranged in layers. Rock can form layers in a variety of ways. Volcanoes, wind, or water can produce layers.[37] A detailed discussion of layering with many Martian examples can be found in Sedimentary Geology of Mars.[38] Sometimes the layers are of different colors. Light-toned rocks on Mars have been associated with hydrated minerals like sulfates. The Mars Rover Opportunity examined such layers close-up with several instruments. Some layers are probably made up of fine particles because they seem to break up into find dust. Other layers break up into large boulders so they are probably much harder. Basalt, a volcanic rock, is thought to in the layers that form boulders. Basalt has been identified on Mars in many places. Instruments on orbiting spacecraft have detected clay (also called phyllosilicate) in some layers.

A detailed discussion of layering with many Martian examples can be found in Sedimentary Geology of Mars.[39]

Layers can be hardened by the action of groundwater. Martian ground water probably moved hundreds of kilometers, and in the process it dissolved many minerals from the rock it passed through. When ground water surfaces in low areas containing sediments, water evaporates in the thin atmosphere and leaves behind minerals as deposits and/or cementing agents. Consequently, layers of dust could not later easily erode away since they were cemented together.

Dust devil tracks can be very pretty. They are caused by giant dust devils removing bright colored dust from the Martian surface; thereby exposing a dark layer. Dust devils on Mars have been photographed both from the ground and high overhead from orbit. They have even blown dust off the solar panels of two Rovers on Mars, thereby greatly extending their useful lifetime.[40] The pattern of the tracks has been shown to change every few months.[41] A study that combined data from the High Resolution Stereo Camera (HRSC) and the Mars Orbiter Camera (MOC) found that some large dust devils on Mars have a diameter of 700 metres (2,300 ft) and last at least 26 minutes.[42]