Short description: One of a series of 30 quadrangle maps of Mars 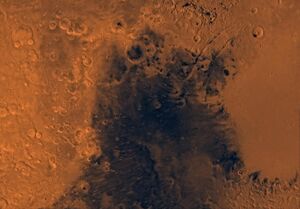 Syrtis Major is an old shield volcano with a central depression that is elongated in a north-south direction. It contains the calderas Meroe Patera and Nili Patera.[2] Interesting features in the area include dikes and inverted terrain.

The name Syrtis Major is derived from the classical Roman name Syrtis maior for the Gulf of Sidra on the coast of Libya (classical Cyrenaica). It is near Cyrene which is the place where "Simon" who carried the cross of Jesus was from.[11][12][13]

Syrtis Major is a distinctly dark region standing out against the lighter surrounding highlands, and was the first documented surface feature of another planet. It was discovered by Christiaan Huygens, who included it in a drawing of Mars in 1659. The feature was originally known as the Hourglass Sea but has been given different names by different cartographers. In 1840, Johann Heinrich von Mädler compiled a map of Mars from his observations and called the feature Atlantic Canale. In Richard Proctor's 1867 map it is called then Kaiser Sea (after Frederik Kaiser of the Leiden Observatory). Camille Flammarion called it the Mer du Sablier (French for "Hourglass Sea") when he revised Proctor's nomenclature in 1876. The name "Syrtis Major" was chosen by Giovanni Schiaparelli when he created a map based on observations made during Mars' close approach to Earth in 1877.[14][15]

Syrtis Major is of great interest to geologists because several types of igneous rocks have been found there with orbiting spacecraft. Besides basalt, dacite and granite have been found there. Dacite originates under volcanoes in magma chambers. Dacites form at the top of the chamber, after heavy minerals (olivine and pyroxene) containing iron and magnesium have settled to the bottom. Granite is formed by an even more complex process.[16]

Some areas of Syrtis Major contain large amounts of the mineral olivine. Olivine turns into other minerals very rapidly in the presence of water, so a high abundance of olivine suggests that for a long time little water has been there.[17]

A variety of important minerals have been discovered near Nili Fossae, a major trough system in Syrtis major. Besides a large exposure of olivine located in Nili Fossae. Other minerals found there include carbonates, aluminum smectite, iron/magnesium smectite, hydrated silica, kaolinite group minerals, and iron oxides.[18][19] In December 2008, NASA's Mars Reconnaissance Orbiter found that rocks at Nili Fossae contain carbonate minerals, a geologically significant discovery.[20][21][22] Later research published in October 2010, described a large deposit of carbonate rocks found inside Leighton Crater at a level that was once buried 4 miles (6 km) below the surface. Finding carbonates in an underground location strongly suggests that Mars was warmer and had more atmospheric carbon dioxide and ancient seas. Because the carbonates were near silicate minerals and clays hydrothermal systems like the deep sea vents on Earth may have been present.[23][24]

Other minerals found by the MRO are aluminum smectite, iron/magnesium smectite, hydrated silica, kaolinite group minerals, iron oxides, and talc.[19][24] NASA scientists discovered that Nili Fossae is the source of plumes of methane, raising the question of whether this source originates from biological sources.[25][26]

Research published in the fall of 2010, describes the discovery of hydrated silica on the flanks of a volcanic cone. The deposit was from a steam fumarole or hot spring, and it represents a recent habitable microenvironment. The 100-meter-high (330 ft) cone rests on the floor of Nili Patera. Observations were obtained with NASA's Mars Reconnaissance Orbiter.[27]

Narrow ridges occur in some places on Mars. They may be formed by different means, but some are probably caused by molten rock moving underground, cooling into hard rock, then being exposed by the erosion of softer, surrounding materials. Such a feature is termed a dike. They are common on Earth—some famous ones are Shiprock, New Mexico;[28] around Spanish Peaks, Colorado;[29][30] and the "Iron Dike" in Rocky Mountain National Park, Colorado.[31]

The discovery on Mars of dikes that were formed from molten rock is highly significant because dikes indicate the existence of intrusive igneous activity. On the Earth such activity is associated with precious metals like gold, silver, and tellurium.[32] Dikes and other intrusive structures are common in the Cripple Creek Mining District of Colorado;[32] the Battle Mountain-Eureka area in north-central Nevada, famous for gold and molybdenum deposits;[33] and around the Franklin dike swarm in Canada. Mapping the presence of dikes allows us to understand how magma (molten rock under the ground) travels and where it could have interacted with surrounding rock, thus producing valuable ores. Deposits of important minerals are also made by dikes and other igneous intrusions heating water which then dissolves minerals that are deposited in cracks in nearby rock.[34] One would expect a great deal of intrusive igneous activity to occur on Mars because it is believed there is more igneous activity under the ground than on top, and Mars has many huge volcanoes.[35]

Some crater floors in the Syrtis Major area show elongated ridges in a lattice-like pattern. Such patterns are typical of faults and breccia dikes formed as a result of an impact. Some have suggested that these linear ridge networks are dikes made up of molten rock; others have advanced the idea that other fluids such as water were involved.[36] The ridges are found where there has been enhanced erosion. Pictures below show examples of these dikes. Water may flow along faults. The water often carries minerals that serve to cement rock materials thus making them harder. Later when the whole area undergoes erosion the dikes will remain as ridges because they are more resistant to erosion.[37] This discovery may be of great importance for future colonization of Mars because these types of faults and breccia dikes on earth are associated with key mineral resources.[38][39] It has been estimated that 25% of the Earth's impacts are connected to mineral production.[40] The largest gold deposit on Earth is the Vredefort 300 km diameter impact structure in South Africa .[41] Perhaps, when people live on Mars these kinds of areas will be mined as they are on earth.[42]

Many places on Mars have buttes that are similar to buttes on Earth, such as the famous ones in Monument Valley, Utah. Buttes are formed when most of a layer(s) of rocks are removed from an area. Buttes usually have a hard, erosion resistant cap rock on the top. The cap rock causes the top of a butte to be flat. An example of a butte in the Syrtis Major quadrangle is shown below.

Sand dunes are found all over Mars. Often sand dunes will form in low areas, for example on the floor of ancient river valleys. Dunes on the floor of Arnus Vallis, an old river valley are visible in a picture below. Dunes in valleys on Mars usually lie at right angles to the valley walls.

Many areas of Mars change their shape and/or coloration. For many years, astronomers observing regular changes on Mars when the seasons changed, thought that what they saw was evidence of vegetation growing. After close-up inspection with a number of spacecraft, other causes were discovered. Basically, the changes are caused by the effects of the wind blowing dust around. Sometimes, fine bright dust settles on the dark basalt rock making the surface appear lighter, at other times the light-toned dust will be blown away; thus making the surface darken—just as if vegetation were growing. Mars has frequent regional or global dust storms that coat the surface with fine bright dust. In the THEMIS image below, white streaks are seen downwind of craters. The streaks are not too bright; they appear bright because of contrast with the dark volcanic rock basalt which makes up the surface.[43]

Some places on Mars show inverted relief. In these locations, a stream bed may be a raised feature, instead of a valley. The inverted former stream channels may be caused by the deposition of large rocks or due to cementation. In either case erosion would erode the surrounding land and leave the old channel as a raised ridge because the ridge would be more resistant to erosion. Images below, taken with HiRISE show sinuous ridges that are old channels that have become inverted.[44]

For several years, researchers have found methane in the atmosphere of Mars. After study, it was determined to be coming from a point in Syrtis Major, located at 10° N and 50° E.[45] A recent study indicates that to match the observations of methane, there must be something that quickly destroys the gas, otherwise it would be spread all through the atmosphere instead of being concentrated in one location. There may be something in the soil that oxidizes the gas before it has a chance to spread. If this is so, that same chemical would destroy organic compounds, thus life would be very difficult on Mars.[46]

Many places on Mars show rocks arranged in layers. Rock can form layers in a variety of ways. Volcanoes, wind, or water can produce layers.[47] A detailed discussion of layering with many Martian examples can be found in Sedimentary Geology of Mars.[48]

There is enormous evidence that water once flowed in river valleys on Mars.[49][50] Images of curved channels have been seen in images from Mars spacecraft dating back to the early seventies with the Mariner 9 orbiter.[51][52][53][54] Indeed, a study published in June 2017, calculated that the volume of water needed to carve all the channels on Mars was even larger than the proposed ocean that the planet may have had. Water was probably recycled many times from the ocean to rainfall around Mars.[55][56]

Other features in Syrtis major quadrangle