Chlorine dioxide is a chemical compound with the formula ClO2 that exists as yellowish-green gas above 11 °C, a reddish-brown liquid between 11 °C and −59 °C, and as bright orange crystals below −59 °C. It does not hydrolyze when it enters water, and is usually handled as an aqueous solution. Potential hazards with chlorine dioxide include poisoning and the risk of spontaneous ignition or explosion on contact with flammable materials.[5] It is also commonly used as a bleach.

Chlorine dioxide was discovered in 1811 by Sir Humphry Davy and has been widely used for bleaching purposes in the paper industry, and for treatment of drinking water.[6] More recent developments have extended its application into food processing, disinfection of premises and vehicles, mold eradication, air disinfection and odor control, treatment of swimming pools, dental applications, and wound cleansing.

The compound has been fraudulently and illegally marketed as an ingestible cure for a wide range of diseases, including childhood autism[7] and coronavirus.[8][9][10] Children who have been given enemas of chlorine dioxide as a supposed cure for childhood autism have suffered life-threatening ailments.[7] The U.S. Food and Drug Administration (FDA) has stated that ingestion or other internal use of chlorine dioxide, outside of oral rinsing under supervision from dentists, has no health benefits of any kind and it should not be used internally for any reason.[11][12] 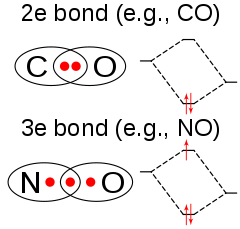 Comparison of three-electron bond to the conventional covalent bond

The structure according to Pauling's General Chemistry

The molecule ClO2 has an odd number of valence electrons, and therefore, it is a paramagnetic radical. In 1933, Lawrence O. Brockway, a graduate student of Linus Pauling, proposed a structure that involved a three-electron bond and two single bonds.[14] However, Pauling in his General Chemistry shows a double bond to one oxygen and a single bond plus a three-electron bond to the other. In fact, there is a resonance – in addition to single bonds to each oxygen, there is a three-electron bond that is in resonance between going to one and going to the other.[15] The three-electron bond represents a bond that is weaker than the double bond. In molecular orbital theory this idea is commonplace if the third electron is placed in an anti-bonding orbital. Later work has confirmed that the highest occupied molecular orbital is indeed an incompletely-filled antibonding orbital.[16]

Chlorine dioxide is a reddish-yellow gas at standard temperature and pressure. It is somewhat unstable, and strong acids can decompose it into chlorine and oxygen. For this reason, it is dangerous to add sulfuric acid or any strong acid to a solid chlorate because of the production of chlorine dioxide.[15] 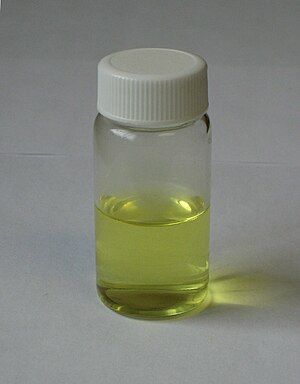 Solution of chlorine dioxide in water

A solution of chlorine dioxide in water is yellow to yellowish-brown.

Even though it doesn't hydrolize in water, the gaseous form may decompose explosively at temperatures below the boiling point of water.[17][18]

Chlorine dioxide is a compound that can decompose extremely violently when separated from diluting substances. As a result, preparation methods that involve producing solutions of it without going through a gas-phase stage are often preferred. Arranging handling in a safe manner is essential.

In the laboratory, ClO2 can be prepared by oxidation of sodium chlorite with chlorine:[19]

or the sodium chlorite–hydrochloric acid method:

or the chlorite–sulfuric acid method:

All three methods can produce chlorine dioxide with high chlorite conversion yield. Unlike the other processes, the chlorite–sulfuric acid method produces completely chlorine-free chlorine dioxide, although it suffers from the requirement of 25% more chlorite to produce an equivalent amount of chlorine dioxide. Alternatively, hydrogen peroxide may be efficiently used in small-scale applications.[13]

In the laboratory, chlorine dioxide can also be prepared by reaction of potassium chlorate with oxalic acid:

or with oxalic and sulfuric acid:

Over 95% of the chlorine dioxide produced in the world today is made by reduction of sodium chlorate, for use in pulp bleaching. It is produced with high efficiency in a strong acid solution with a suitable reducing agent such as methanol, hydrogen peroxide, hydrochloric acid or sulfur dioxide.[13] Modern technologies are based on methanol or hydrogen peroxide, as these chemistries allow the best economy and do not co-produce elemental chlorine. The overall reaction can be written as:[20]

As a typical example, the reaction of sodium chlorate with hydrochloric acid in a single reactor is believed to proceed through the following pathway:

which gives the overall reaction

The commercially more important production route uses methanol as the reducing agent and sulfuric acid for the acidity. Two advantages of not using the chloride-based processes are that there is no formation of elemental chlorine, and that sodium sulfate, a valuable chemical for the pulp mill, is a side-product. These methanol-based processes provide high efficiency and can be made very safe.[13]

The variant process using chlorate, hydrogen peroxide and sulfuric acid has been increasingly used since 1999 for water treatment and other small-scale disinfection applications, since it produce a chlorine-free product at high efficiency.

Very pure chlorine dioxide can also be produced by electrolysis of a chlorite solution:[21]

High-purity chlorine dioxide gas (7.7% in air or nitrogen) can be produced by the gas–solid method, which reacts dilute chlorine gas with solid sodium chlorite:[21]

Chlorine dioxide is used for bleaching of wood pulp and for the disinfection (called chlorination) of municipal drinking water,[22][23]:4-1[24] treatment of water in oil and gas applications, disinfection in the food industry, microbiological control in cooling towers, and textile bleaching.[25] As a disinfectant, it is effective even at low concentrations because of its unique qualities.[13][23][25]

Chlorine dioxide has been used to bleach flour.[28]

Chlorine dioxide is also superior to chlorine when operating above pH 7,[23]:4-33 in the presence of ammonia and amines[34] and for the control of biofilms in water distribution systems.[31] Chlorine dioxide is used in many industrial water treatment applications as a biocide including cooling towers, process water, and food processing.[35]

It is more effective as a disinfectant than chlorine in most circumstances against waterborne pathogenic agents such as viruses,[37] bacteria and protozoa – including the cysts of Giardia and the oocysts of Cryptosporidium.[23]:4-20–4-21

The use of chlorine dioxide in water treatment leads to the formation of the by-product chlorite, which is currently limited to a maximum of 1 part per million in drinking water in the USA.[23]:4-33 This EPA standard limits the use of chlorine dioxide in the US to relatively high-quality water because this minimizes chlorite concentration, or water that is to be treated with iron-based coagulants (iron can reduce chlorite to chloride).[38] The World Health Organization advises a 1ppm dosification too.[33]

Use in public crises

Chlorine dioxide has many applications as an oxidizer or disinfectant.[13] Chlorine dioxide can be used for air disinfection[39] and was the principal agent used in the decontamination of buildings in the United States after the 2001 anthrax attacks.[40] After the disaster of Hurricane Katrina in New Orleans, Louisiana, and the surrounding Gulf Coast, chlorine dioxide was used to eradicate dangerous mold from houses inundated by the flood water.[41]

In addressing the COVID-19 pandemic, the U.S. Environmental Protection Agency has posted a list of many disinfectants that meet its criteria for use in environmental measures against the causative coronavirus.[42][43] Some are based on sodium chlorite that is activated into chlorine dioxide, though differing formulations are used in each product. Many other products on the EPA list contain sodium hypochlorite, which is similar in name but should not be confused with sodium chlorite because they have very different modes of chemical action.

Chlorine dioxide may be used as a fumigant treatment to "sanitize" fruits such as blueberries, raspberries, and strawberries that develop molds and yeast.[44]

Chlorine dioxide may be used to disinfect poultry by spraying or immersing it after slaughtering.[45]

Chlorine dioxide may be used for the disinfection of endoscopes, such as under the trade name Tristel.[46] It is also available in a trio consisting of a preceding pre-clean with surfactant and a succeeding rinse with deionized water and a low-level antioxidant.[47]

Chlorine dioxide may be used for control of zebra and quagga mussels in water intakes.[23]:4-34

Chlorine dioxide was shown to be effective in bedbug eradication.[48]

For water purification during camping, chlorine dioxide generating tablets disinfect more pathogens than household bleach, but at a higher cost per volume.[49][50]

Chlorine dioxide is fraudulently marketed as a magic cure for a range of diseases from brain cancer to HIV/AIDS. Enemas of chlorine dioxide are a supposed cure for childhood autism, resulting in complaints to the FDA reporting life-threatening reactions,[51] and even death.[52] Chlorine dioxide is relabeled to a variety of brand names including, but not limited to MMS, Miracle Mineral Solution and CD protocol.[53] There is no scientific basis for chlorine dioxide's medical properties and the FDA has warned against its usage.[54][12]

Chlorine dioxide is used as an oxidant for destroying phenols in wastewater streams and for odor control in the air scrubbers of animal byproduct (rendering) plants.[23]:4-34 It is also available for use as a deodorant for cars and boats, in chlorine dioxide-generating packages that are activated by water and left in the boat or car overnight.

Safety issues in water and supplements

On July 30, 2010, and again on October 1, 2010, the United States Food and Drug Administration warned against the use of the product "Miracle Mineral Supplement", or "MMS", which when prepared according to the instructions produces chlorine dioxide. MMS has been marketed as a treatment for a variety of conditions, including HIV, cancer, autism, and acne. The FDA warnings informed consumers that MMS can cause serious harm to health and stated that it has received numerous reports of nausea, diarrhea, severe vomiting, and life-threatening low blood pressure caused by dehydration.[57][58] This warning was repeated for a third time on August 12, 2019, and a fourth on April 8, 2020, stating that ingesting MMS is the same as drinking bleach, and urging consumers to not use them or give these products to their children for any reason.[12]