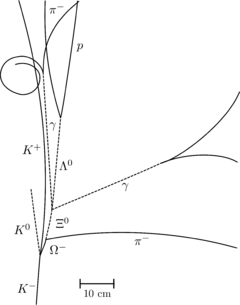 Bubble chamber trace of the first observed Ω baryon event at Brookhaven National Laboratory, adapted from original tracing. The tracks of neutral particles (dashed lines) are not visible in the bubble chamber. The collision of a K− meson with a proton creates an Ω−, a K0 and a K+. The Ω− decays into a π− and a Ξ0, which in turn decays into a Λ0 and a π0. The Λ0 decays into a proton and a π−. The π0, invisible due to its short lifetime, decays into two photons (γ), which in turn each create an electron-positron pair.

The omega baryons are a family of subatomic hadron (a baryon) particles that are represented by the symbol Ω and are either neutral or have a +2, +1 or −1 elementary charge. They are baryons containing no up or down quarks.[1] Omega baryons containing top quarks are not expected to be observed. This is because the Standard Model predicts the mean lifetime of top quarks to be roughly 5×10−25 s,[2] which is about a twentieth of the timescale for strong interactions, and therefore that they do not form hadrons.

The first omega baryon discovered was the Ω−, made of three strange quarks, in 1964.[3] The discovery was a great triumph in the study of quark processes, since it was found only after its existence, mass, and decay products had been predicted in 1961 by the United States physicist Murray Gell-Mann and, independently, by the Israeli physicist Yuval Ne'eman. Besides the Ω−, a charmed omega particle (Ω0c) was discovered, in which a strange quark is replaced by a charm quark. The Ω− decays only via the weak interaction and has therefore a relatively long lifetime.[4] Spin (J) and parity (P) values for unobserved baryons are predicted by the quark model.[5]

Since omega baryons do not have any up or down quarks, they all have isospin 0. 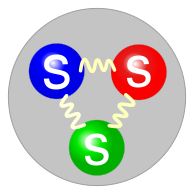 † Particle (or quantity, i.e. spin) has neither been observed nor indicated.

The Ω−b particle is a "doubly strange" baryon containing two strange quarks and a bottom quark. A discovery of this particle was first claimed in September 2008 by physicists working on the DØ experiment at the Tevatron facility of the Fermi National Accelerator Laboratory.[7][8] However, the reported mass of 6165±16 MeV/c2 was significantly higher than expected in the quark model. The apparent discrepancy from the Standard Model has since been dubbed the "Ωb puzzle". In May 2009, the CDF collaboration made public their results on the search for the Ω−b based on analysis of a data sample roughly four times the size of the one used by the DØ experiment.[6] CDF measured the mass to be 6054.4±6.8 MeV/c2, which was in excellent agreement with the Standard Model prediction. No signal has been observed at the DØ reported value. The two results differ by 111±18 MeV/c2, which is equivalent to 6.2 standard deviations and are therefore inconsistent. Excellent agreement between the CDF measured mass and theoretical expectations is a strong indication that the particle discovered by CDF is indeed the Ω−b. In February 2013 the LHCb collaboration published a measurement of the Ω−b mass that is consistent with, but more precise than, the CDF result.[9]