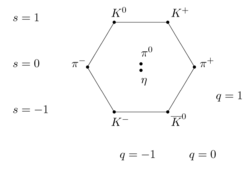 In physics, the Eightfold Way is a theory organizing subatomic hadrons. The name was coined by American physicist Murray Gell-Mann as an allusion to the Noble Eightfold Path of Buddhism. It led to the development of the quark model. An equivalent theory was independently proposed by Israeli physicist Yuval Ne'eman.[clarification needed]

The Eightfold Way organizes the mesons and spin-1/2 baryons into an octet.[1] The principles of the Eightfold Way also applied to the spin-3/2 baryons, forming a decuplet. However, one of the particles of this decuplet had never been previously observed. Gell-Mann called this particle the Omega- and predicted in 1962 that it would have a strangeness −3, electric charge −1 and a mass near 1680 MeV/c2. In 1964, a particle closely matching these predictions was discovered[2] by a particle accelerator group at Brookhaven. Gell-Mann received the 1969 Nobel Prize in Physics for his work on the theory of elementary particles. 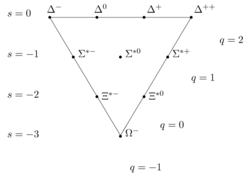 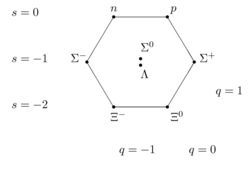 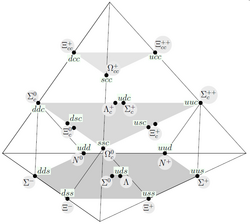 Historically, quarks were motivated by an understanding of flavour symmetry. First, it was noticed (1961) that groups of particles were related to each other in a way that matched the representation theory of SU(3). From that, it was inferred that there is an approximate symmetry of the universe which is parametrized by the group SU(3). Finally (1964), this led to the discovery of three light quarks (up, down, and strange) interchanged by these SU(3) transformations.

The Eightfold Way may be understood in modern terms as a consequence of flavor symmetries between various kinds of quarks. Since the strong nuclear force affects quarks the same way regardless of their flavor, replacing one flavor of quark with another in a hadron should not alter its mass very much. Mathematically, this replacement may be described by elements of the SU(3) group. The octets and other arrangements are representations of this group.

There is an abstract three-dimensional vector space:

and the laws of physics are approximately invariant under applying a determinant-1 unitary transformation to this space (sometimes called a flavour rotation):

Here, SU(3) refers to the Lie group of 3×3 unitary matrices with determinant 1 (special unitary group). For example, the flavour rotation

(This is a slightly over-simplified description of flavour rotations, ignoring anti-quarks etc.) 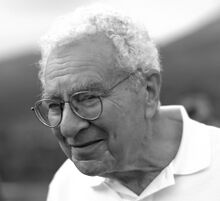 Murray Gell-Mann (b. 1929) articulator and pioneer of group symmetry in QFT

Assume we have a certain particle—for example, a proton—in a quantum state [math]\displaystyle{ |\psi\rangle }[/math]. If we apply one of the flavour rotations A to our particle, it enters a new quantum state which we can call [math]\displaystyle{ A|\psi\rangle }[/math]. Depending on A, this new state might be a proton, or a neutron, or a superposition of a proton and a neutron, or various other possibilities. The set of all possible quantum states spans a vector space.

Representation theory is a mathematical theory that describes the situation where elements of a group (here, the flavour rotations A in the group SU(3)) are automorphisms of a vector space (here, the set of all possible quantum states that you get from flavour-rotating a proton). Therefore, by studying the representation theory of SU(3), we can learn the possibilities for what the vector space is and how it is affected by flavour symmetry.

Since the flavour rotations A are approximate, not exact, symmetries, each orthogonal state in the vector space corresponds to a different particle species. In the example above, when a proton is transformed by every possible flavour rotation A, it turns out that it moves around an 8-dimensional vector space. Those 8 dimensions correspond to the 8 particles in the so-called "baryon octet" (proton, neutron, Σ+, Σ0, Σ−, Ξ−, Ξ0, Λ). This corresponds to an 8-dimensional ("octet") representation of the group SU(3). Since A is an approximate symmetry, all the particles in this octet have similar mass.[3]