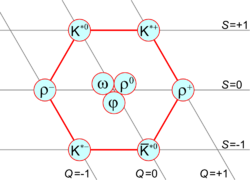 The vector mesons consisting of light quarks form a nonet.

In high energy physics, a vector meson is a meson with total spin 1 and odd parity (usually noted as JP = 1−). Vector mesons have been seen in experiments since the 1960s, and are well known for their spectroscopic pattern of masses.[1]

Some vector mesons can, compared to other mesons, be measured to a very high precision. This stems from the fact that they have the same quantum numbers as the photon, JPC = 1−−, where J = angular momentum quantum number, P = parity, C = C parity. Therefore they appear in electron-positron collisions in the process [math]\displaystyle{ e^- e^+ \to \gamma \to q\bar q }[/math], which provides experimentally a clear signal compared to other measurements, which have to use hadronic processes. Vector mesons play a huge role in the study of the strong hadronic force.