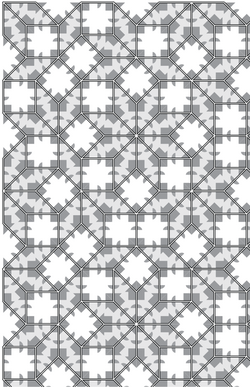 A portion of tiling by Ammann's aperiodic A5 set of tiles, decorated with finite, local matching rules which force infinite, global structure, that of Amman–Beenker tiling.

In geometry, an Ammann–Beenker tiling is a nonperiodic tiling which can be generated either by an aperiodic set of prototiles as done by Robert Ammann in the 1970s, or by the cut-and-project method as done independently by F. P. M. Beenker. They are one of the five sets of tilings discovered by Ammann and described in Tilings and Patterns.[1]

The Ammann–Beenker tilings have many properties similar to the more famous Penrose tilings:

Various methods to describe the tilings have been proposed: matching rules, substitutions, cut and project schemes [2] and coverings.[3][4] In 1987 Wang, Chen and Kuo announced the discovery of a quasicrystal with octagonal symmetry.[5]

Description of the tiles 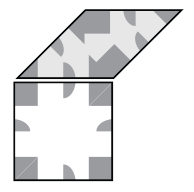 Amman's A and B pair of A5 tiles, decorated with matching rules; any tiling by these tilings is necessarily non-periodic, and the tiles are therefore aperiodic. 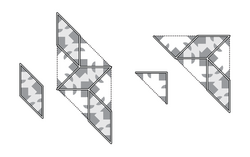 Ammann A5 substitution rules, used to prove that the A5 tiles can only form non-periodic hierarchical tilings and thus are aperiodic tiles. 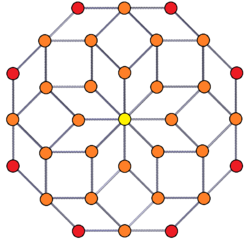 This tiling exists in a 2D orthogonal projection of a 4D 8-8 duoprism constructed from 16 octagonal prisms.

Amman's A and B tiles in his pair A5 a 45-135-degree rhombus and a 45-45-90 degree triangle, decorated with matching rules that allowed only certain arrangements in each region, forcing the non-periodic, hierarchical, and quasiperiodic structures of each of the infinite number of individual Ammann–Beenker tilings.

This is the substitution rule for the alternate tileset.

The relationship between the two tilesets.

In addition to the edge arrows in the usual tileset, the matching rules for both tilesets can be expressed by drawing pieces of large arrows at the vertices, and requiring them to piece together into full arrows.

Katz[6] has studied the additional tilings allowed by dropping the vertex constraints and imposing only the requirement that the edge arrows match. Since this requirement is itself preserved by the substitution rules, any new tiling has an infinite sequence of "enlarged" copies obtained by successive applications of the substitution rule. Each tiling in the sequence is indistinguishable from a true Ammann–Beenker tiling on a successively larger scale. Since some of these tilings are periodic, it follows that no decoration of the tiles which does force aperiodicity can be determined by looking at any finite patch of the tiling. The orientation of the vertex arrows which force aperiodicity, then, can only be deduced from the entire infinite tiling.

The tiling has also an extremal property : among the tilings whose rhombuses alternate (that is, whenever two rhombuses are adjacent or separated by a row of square, they appear in different orientations), the proportion of squares is found to be minimal in the Ammann–Beenker tilings.[7]

The Ammann–Beenker tilings are closely related to the silver ratio ([math]\displaystyle{ 1 + \sqrt 2 }[/math]) and the Pell numbers.

Transforming this matrix to the new coordinates given by

This third matrix then corresponds to a rotation both by 45° (in the first two dimensions) and by 135° (in the last two). We can then obtain an Ammann–Beenker tiling by projecting a slab of hypercubes along either the first two or the last two of the new coordinates.

Alternatively, an Ammann–Beenker tiling can be obtained by drawing rhombs and squares around the intersection points of pair of equal-scale square lattices overlaid at a 45-degree angle. These two techniques were developed by Beenker in his paper.

A related high dimensional embedding into the tesseractic honeycomb is the Klotz construction, as detailed in its application here in the Baake and Joseph paper.[9] The octagonal acceptance domain thus can be further dissected into parts, each of which then give rise for exactly one vertex configuration. Moreover, the relative area of either of these regions equates to the frequency of the corresponding vertex configuration within the infinite tiling.