Short description: Star that never sets due to its apparent proximity to a celestial pole

Northern circumpolar stars appearing to revolve around the north celestial pole. Note that Polaris, the bright star near the center, remains almost stationary in the sky. The north pole star is constantly above the horizon throughout the year, viewed from the Northern Hemisphere. (The graphic shows how the apparent positions of the stars move over a 24-hour period, but in practice, they are invisible in daylight, in which sunlight outshines them.) 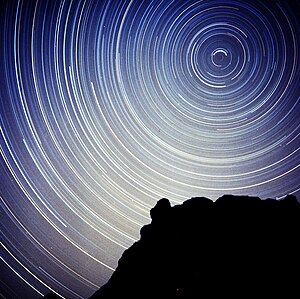 Circumpolar star trails in a long-exposure photo of several hours. Note that the stars near the celestial pole leave shorter trails with the long exposure. 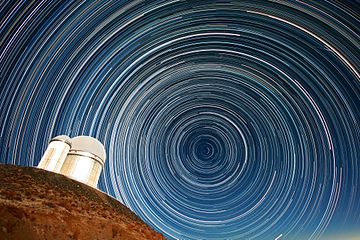 A circumpolar star is a star that, as viewed from a given latitude on Earth, never sets below the horizon due to its apparent proximity to one of the celestial poles. Circumpolar stars are therefore visible from said location toward the nearest pole for the entire night on every night of the year (and would be continuously visible throughout the day too, were they not overwhelmed by the Sun's glare). Others are called seasonal stars.

Before the definition of the Arctic was formalized as the region north of the Arctic Circle which experiences the Midnight sun, it more broadly meant those places where the 'bear' constellations (Ursa Major, the Great Bear, and Ursa Minor, the Little Bear) were high in the sky. Thus the word 'Arctic' is derived from the Greek ἀρκτικός (arktikos), 'bearish', from ἄρκτος (arktos), 'bear'.

The circumpolar stars appear to lie within a circle that is centered at the celestial pole and tangential to the horizon. At the Earth's North Pole, the north celestial pole is directly overhead, and all stars that are visible at all (that is, all stars in the Northern Celestial Hemisphere) are circumpolar.[1] As one travels south, the north celestial pole moves towards the northern horizon. More and more stars that are at a distance from it begin to disappear below the horizon for some portion of their daily "orbit", and the circle containing the remaining circumpolar stars becomes increasingly small. At the Equator, this circle vanishes to a single point – the celestial pole itself – which lies on the horizon, and so all of the stars capable of being circumpolar are for half of every 24 hour period below the horizon. There, pole star itself will only be made out from a place of sufficient height.

As one travels south of the Equator, the opposite happens. The south celestial pole appears increasingly high in the sky, and all the stars lying within an increasingly large circle centered on that pole become circumpolar about it. This continues until one reaches the Earth's South Pole where, once again, all visible stars are circumpolar.

The celestial north pole is located very close (less than 1° away) to the pole star (Polaris or North Star), so from the Northern Hemisphere, all circumpolar stars appear to move around Polaris. Polaris itself remains almost stationary, always at the north (i.e. azimuth of 0°), and always at the same altitude (angle from the horizon), equal to the observer's latitude. These are then classified into quadrants.

Polaris always has an azimuth equal to zero. The pole's altitude for a given latitude Ø is fixed, and its value is given by the following formula: A = 90° - Ø. All stars with a declination less than A are not circumpolar.[2]

"A star whose diurnal circle lies above the horizon never sets, even though it cannot be seen during the day. Designation of a star as circumpolar depends on the observer's latitude. At the equator no star is circumpolar. At the North or South Pole all stars that are visible at all are circumpolar, since only one half of the celestial sphere can ever be seen. For an observer at any other latitude a star whose declination is greater than 90° minus the observer's latitude will be circumpolar, appearing to circle the celestial pole and remaining always above the horizon. A constellation made up entirely of circumpolar stars is also called circumpolar. From most of the United States (above lat. 40° N) the Big Dipper is circumpolar".[4]

Some stars within the far northern constellation (such as Cassiopeia, Cepheus, Ursa Major, and Ursa Minor) roughly north of the Tropic of Cancer (23° 26′ N) will be circumpolar stars, which never rise or set.[3]

For British Isles observers, for example, the first magnitude stars Capella (declination +45° 59′) and Deneb (+45° 16′) do not set from anywhere in the country. Vega (+38° 47′) is technically circumpolar north of latitude 51° 13′ N (just south of London ); taking atmospheric refraction into account, it will probably only be seen to set at sea level from Cornwall and the Channel Islands.

Stars in the far southern constellations (such as Crux, Musca, and Hydrus) roughly south of the Tropic of Capricorn (23° 26′ S) are circumpolar to typical points of observation beyond that tropic.[3]