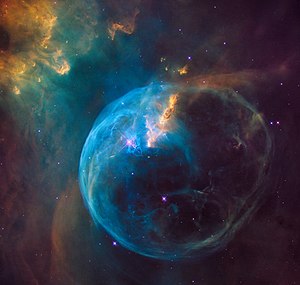 The Bubble Nebula (NGC 7635), imaged by the Hubble Space Telescope, is seven light years across

A stellar-wind bubble is a cavity light years across filled with hot gas blown into the interstellar medium by the high-velocity (several thousand km/s) stellar wind from a single massive star of type O or B. Weaker stellar winds also blow bubble structures, which are also called astrospheres. The heliosphere blown by the solar wind, within which all the major planets of the Solar System are embedded, is a small example of a stellar-wind bubble.